13 Dishes Worth Travelling to Israel For 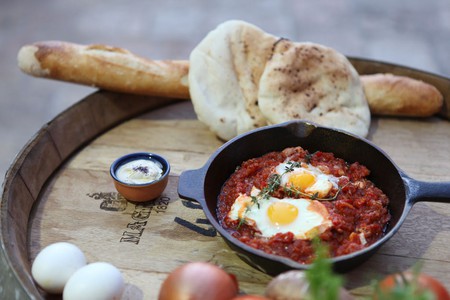 Israeli cuisine has been shaped by the melting pot of cultures that make up the country. From traditional Jewish Eastern-European stews to street food brought over by Jewish Iraqi immigrants, these delicious Israeli dishes reflect the diversity of its population and will appeal to all tastes.

Shakshuka is one of Israel’s most popular dishes, typically served for breakfast or brunch. Hot, hearty and filling, it is based on a tomato and pepper sauce spiced with cumin and chilli flakes, with poached eggs on top and a sprinkling of parsley. Advanced level: try a hummus-shakshuka, which is exactly what it sounds like: a bowl of hummus with shakshuka in the middle. You can thank us later.

A deep-fried chickpea ball, falafel is served either in a pita or as a side dish for a bowl of hummus or an Israeli salad. It is the most popular fast food in Israel, and it isn’t hard to understand why: whether you’re in Tel Aviv or Jerusalem, Beer Sheva or Akko, the options for delicious falafel are endless.

If you’re in Tel Aviv, head to HaKosem (where you’ll be handed free falafel in the line) or Hummus Caspi, for their fresh and perfectly crispy falafel served in tahini sauce.

Most major cities in the world seem to sell shawarma or some form of it, but none will be as tasty as Israeli shawarma! Served in either a pita or a laffa (a giant wrap), the meat is typically turkey or chicken, slow-cooked on a rotating skewer, accompanied with hummus, tehina (sesame seed dip), Israeli salad, pickles, cabbage and more, depending on your preference.

Advanced tip: take your shawarma to the next level by adding amba, a thick, spicy, mango based sauce that originates from Iraq. Apologize to your other half in advance – you’ll smell of it all day.

Jachnun is a Jewish dish originating from Yemen, traditionally eaten on Shabbat mornings. Prepared using dough, it is rolled up and baked overnight. The final product is a dark, amber coloured pastry, slightly sweet in taste. Served with a tomato dip, boiled eggs, and skhug (hot sauce), Jachnun is a must-try when in Israel.

This is a delicious Palestinian dessert common throughout Israel. A sweet, cheesy pastry, knafeh is soaked in sugar syrup, flavoured with orange or rose water, and sprinkled with chopped pistachios.

No one ever leaves the table hungry after a proper Israeli breakfast. Typically consisting of an omelette, an Israeli salad, small pots containing different cheeses, tuna, and olives, a selection of breads, and a fresh orange juice and an afuch (Israeli cappuccino), Israeli breakfasts are healthy, filling and delicious.

Is there anything better than israeli breakfast? The answer is NO! #israelibreakfast #telaviv #dizengoffcafe #israel @hannagynn

Sandwich Shop, Mediterranean, Middle Eastern
Facebook
Email
Twitter
Pinterest
Copy link
Share
Map View
Believe it or no, there is more to Israeli street food than shwarma and falafel! Equally popular among locals is a dish that Iraqi-Jewish immigrants brought to Israel in the 1940s and ’50s: sabich. Served in a pita, it consists of fried eggplant, hard boiled eggs, hummus, tahini sauce, Israeli salad and pickles. For the advanced and adventurous, order a cheese sabich, which replaces the hummus with goat’s cheese and feta giving a different, but equally delicious flavour. Head to Sabich Tchernichovsky for the best sabich in Tel Aviv.
Open In Google Maps
2 Tchernikhovski Street, Tel Aviv-Yafo, Tel Aviv District, Israel
+972505306654
Visit Website
Give us feedback

A traditional Ashkenazi Jewish stew of beef, potatoes, beans, vegetables and barley simmered overnight for 12 hours. The outcome is a hearty, filling and delicious dish, perfect for a winter’s evening – or a Saturday hangover. Note: hamin is the Sephardic Jewish variation of cholent, which replaces beans and barley with rice, and beef with chicken.

Traditionally cooked for Shabbat dinner and religious holidays by Israeli Jews of North African descent, chraime is a dish common on menus all over Israel. It consists of baked fish in a sauce of tomatoes, hot peppers and spices including paprika and cumin, topped off with a sprinkling of coriander. Delicious.

Tomato season is here! This Sephardic fish dish “Chraime,” has a fresh tomato base. Make it mild or spicy!

Market, Israeli, $$$
Facebook
Email
Twitter
Pinterest
Copy link
Share
Map View
Kubeh is an authentic Middle Eastern dish brought to Israel by Iraqi and Kurdish Jewish immigrants. A hearty soup with balls made of bulgur, minced onions and ground red meat, it is a perfect meal to keep you warm during the Israeli winter and can be red or yellow in colour. Jerusalem’s Machane Yehuda market, in which you’ll find several Iraqi food joints such as Rahmo, is a great place to sample this dish.
Open In Google Maps
Mahane Yehuda Market, 5 Ha-Eshkol Street, Jerusalem, Jerusalem District, Israel
+97226234595
Visit Website
Give us feedback 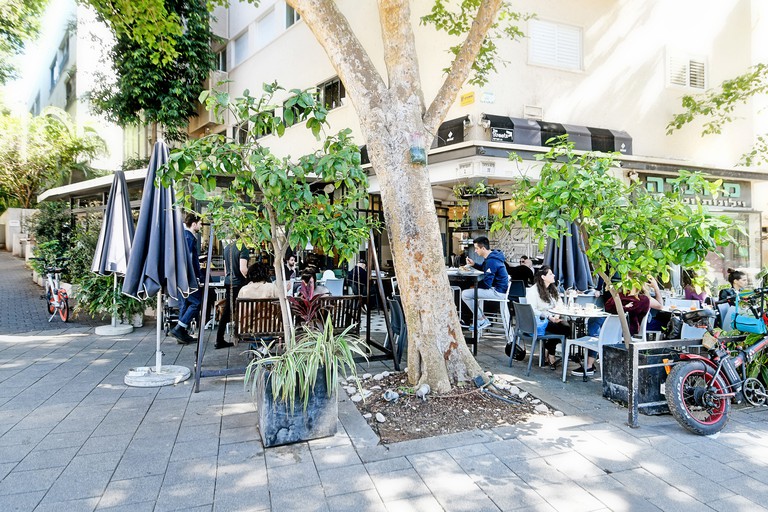 The Streets is open 24/7 | © Ran Biran
Israel’s chefs seem to have mastered the art of schnitzel making. Found on almost every menu in the country, Israeli schnitzel differs from German schnitzel in that it uses chicken or turkey rather than pork, and is served usually with an Israeli salad or mashed potato/chips. For a schnitzel sandwich worth travelling to Israel for on its own, head to The Streets in Tel Aviv.
Open In Google Maps
70 King George Street, Tel Aviv-Yafo, Tel Aviv District, Israel
+97236201070
Visit Website
Give us feedback

Last but by no means least, is hummus, which holds a place in Israeli society almost as sacred as the Wailing Wall. Eaten as a main course – not as a condiment – it comes in many different forms from plain, to hummus musabcha, hummus shakshuka and so on. Served with pita bread (which you’ll use to mop up every last bit of hummus) and various extras such as a hard boiled egg, raw onion, pickles and olives, Israeli hummus is worth swimming across the ocean for. Abu Hassan is widely regarded as the best hummus spot in Tel Aviv-Yafo.