How To Make the Most of 48 Hours in Kyiv (Kiev), Ukraine 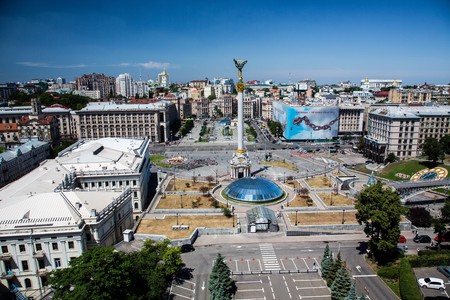 You could spend a year in Kyiv (Kiev) and still not have experienced all the delights this vibrant city has to offer, but fear not: a weekend packed with art, architecture, theatre, music and good food in the Ukrainian capital will make a lasting impression.

More than a thousand years old, Kyiv has seen its fair bit of history. Legend has it that the city was founded by four siblings – Kyi, Shchek, Khoryv and Lybid – as they sailed down the River Dnipro in the 6th century. Several sackings, a Mongol invasion, Soviet rule, Nazi occupation and a Maidan revolution later, Kyiv has emerged as one of Europe’s most exciting contemporary cities. After wandering through the city’s distinctive districts, sampling Crimean Tatar cuisine and homemade nastoyanky spirits, seeing cutting-edge plays and admiring mosaics, golden domes and breathtaking modernist architecture, you’ll soon understand why. 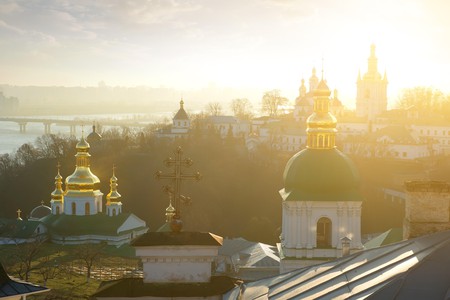 Have brunch at Mimosa

With distressed walls covered with mirrors and elegant chandeliers, Mimosa is an atmospheric gem of a brunch spot. Try the pancakes with salmon and poached eggs, or opt for something more local with syrniki, fried cottage cheese pancakes served with apricot jam. You can also enjoy the cafe’s signature cocktail and namesake, the mimosa, in its classic form or with a variety of different fruit juices.

Walk 250 metres across the road to the capital’s premier contemporary art gallery, set up by oligarch Viktor Pinchuk. Free entry will get you access to a range of impressive exhibitions of works by both Ukrainian and international artists. Previous shows have explored Soviet book art from Lviv; the work of photographer Boris Mikhailov; and the role of radical art in constructing and preserving democracy. Don’t forget to visit the futuristic toilets, where the walls and ceilings are covered in mirrors and multicoloured lights, for a somewhat disorientating but memorable experience.

Even if you’re not intending to buy anything, it’s worth stopping in at Bessarabka Market, just across the road from the Pinchuk Art Centre. This lofty market sells all kinds of fruit, vegetables, nuts, spices and flowers, with kiosks around the edge offering homemade spirits, falafel, doughnuts, Italian delicacies and more. Vietnamskii privet, a Vietnamese stall in the far corner of the market, makes delicious mango shakes.

Head back outside to see the pedestal where a statue of Lenin used to stand before it was toppled in the wave of decommunisation that swept Ukraine in 2015. It has become something of a shrine to independent Ukraine and now boasts an art object in the form of a curious blue hand by Romanian sculptor Bogdan Rață.

Walk down Khreshchatyk, the capital’s main thoroughfare, which is pedestrianised at the weekends. Stop in at Vsi svoï, a stylish shop selling the latest in homegrown Ukrainian design. There are two branches: one for clothing and another for home décor, ceramics, stationery and accessories.

If you have time, it’s a short walk to University Park, where you can see the iconic red university building and watch elderly men engage in deadly serious games of chess. 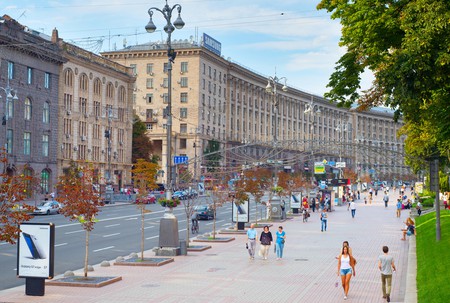 Khreshchatyk is Kyiv’s main street, and is pedestrianised at the weekends | © Ivan Nesterov / Alamy Stock Photo

Musafir, located just off Khreshchatyk next to Teatralna metro station, is one of Kyiv’s most unique and enjoyable lunch experiences. A restaurant that relocated from Bakhchisarai on the Crimean peninsula in 2014, Musafir specialises in Crimean Tatar cuisine and offers incredible value for money. Try the homemade ayran, the cheese cheburek, shashlyk kebabs, or baked aubergine, and finish with sweet baklava.

Stroll from Maidan to Pechersk Lavra

Maidan Square, or Independence Square, is an iconic place, not just for the cityscape, but also for collective identity in contemporary Ukraine – it was here that the 2014 ‘Revolution of Dignity’ that ousted former President Yanukovych began. This monument to independence is covered in political graffiti, stickers and photos in memory of those who lost their lives killed during the revolution.

Walk down to the end of Khreshchatyk, where you’ll find the Arch of Friendship of Nations, a huge titanium arch with some impressive Soviet statues underneath. There’s a viewing point behind the arch where you can look down on the River Dnipro. From here you can walk along the river cliffs through the park, past the Dinamo football stadium, the Verkhovna Rada (Parliament of Ukraine), the constructivist Hotel Saliut and the haunting Holodomor famine memorial. You end up at the Pechersk Lavra, a beautiful Orthodox monastery featuring murals by the Russian painter Mikhail Nesterov and lots of gold. You can drop into one of the many churches inside the complex and visit the holy caves underground where former monks are buried. A little further along the embankment is the gigantic Motherland statue, which you can also see from the monastery. 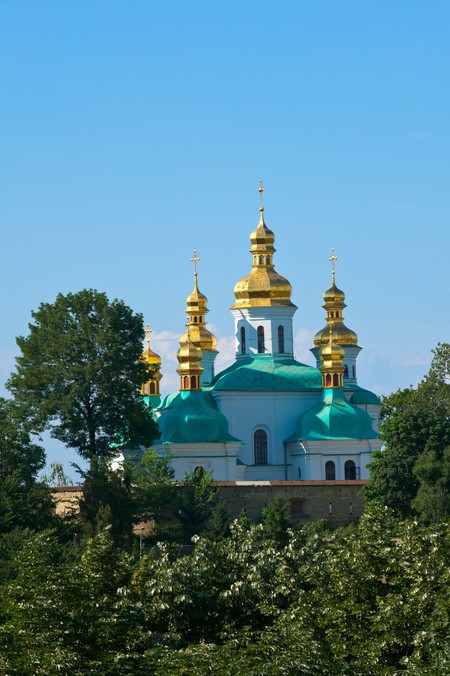 Walk back to Arsenalna metro, the deepest underground station in the world, and travel to Kontraktova Ploshcha, the centre of Podil, an ancient trading district that is now home to a thriving community of students and creative professionals. Two minutes from the metro station lies Chernomorka, a seafood restaurant with fresh fish sourced from the Black Sea. This is a great place to try very reasonably priced Ukrainian oysters, mussels and calamari, along with a glass of prosecco. Make sure to try herring, a very Ukrainian snack, either raw with onions or in a traditional paste called forshmak. For hardcore herring fans, there’s a separate café downstairs called ‘Nothing But Herring’.

Walk to the other end of Podil, the industrial edge at the foot of the steep Yurkovytsia hill, for a true taste of Kyiv nightlife. Here a former Soviet ribbon factory has been transformed into a complex of venues and creative spaces run by some of the capital’s brightest young talent. See a play at PostPlay Theatre, a small, brick-walled space that showcases new Ukrainian drama and experimental productions. The team that manages the theatre have even built a wooden bar from scratch, where they sell dozens of homemade nastoyanki (infused spirits), from cherry-flavoured to rosemary, chocolate, aniseed and the enigmatically named ‘Crimea’. If your energy levels are still high, head next door to Closer, Kyiv’s number one techno club. Edgy and innovative, the parties here rival those in Berlin and Tbilisi.

Revive yourself with Kyiv’s best coffee

Stop in at First Point Espresso or Espressoholic, both in the centre of Podil, for caffeine in its most delicious form. Both are endlessly popular and are especially lovely in summer, when customers spill out onto the street. Enjoy good coffee, a range of pastries and a friendly atmosphere here before venturing out for your second day in Kyiv.

If the weather is nice, take a walk down the main avenue of Podil – ‘the Vals’ – to the disused Rybalskyi Bridge on the River Dnipro, where a backdrop of graffiti sets the scene for stunning views of the water and Kyiv’s industrial outskirts. Just a few minutes away is Izolyatsia, a cultural centre that relocated from Donbas when war broke out, which offers hands-on silk screening workshops, life drawing, photography exhibitions and a co-working space.

If rain is looking likely, instead walk to Zhovten cinema, an old venue with regular film screenings and festivals, often in the original language or with English subtitles. ‘Zhovten’ means ‘October’ and comes from the Ukrainian word for yellow, as October is the month when the leaves on the trees turn yellow. Literature lovers, meanwhile, will be keen to visit Bulgakov’s family home nearby, now a museum displaying hundreds of his belongings including medical instruments, artworks, manuscripts and everyday items. 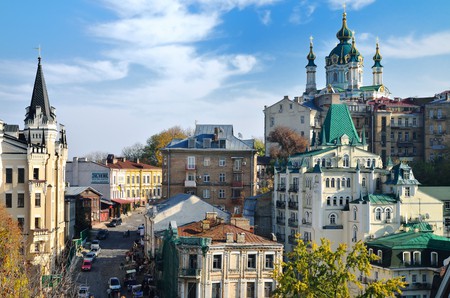 Have lunch at East India Company

This café in Podil is a great spot for lunch, and serves a variety of East Asian dishes including a very tasty peanut chicken noodle soup. The drinks are top-notch: try the sweet lassi or a Ukrainian craft beer. Look for the bright blue facade and tangle of plants in the window – you can’t miss it.

Take the funicular to gold-adorned churches

The Kyiv funicular costs the same as a metro ride (around US$0.30) and is a fully functional part of the city’s public transport system. Walk to Poshtova Ploshcha and buy a token to travel upwards. Once at the top, you’ll emerge into a religious architecture paradise – on one side is the gold-domed St Michael’s Cathedral, while a little further away is St Sophia, a spectacular cathedral dating from the 11th century and birthplace of Ukrainian and Russian Orthodoxy. Admire the ornate bell-tower, or step inside to marvel at the Byzantine-inspired mosaics.

It may sound morbid, but Baikove Cemetery is home to one of Kyiv’s most astounding sights – the modernist crematorium. Take the metro from Maidan Nezalezhnosti to Palats Ukraïna and walk up the hill from there to reach this architectural wonder. See if you can find the accompanying Wall of Remembrance. Its avant-garde concrete relief was covered up seven years after its construction, but a small portion is still visible. On the way you can wander through the cemetery, which is also home to several Soviet war graves, or check out the sizeable stalls selling artificial flowers for mourners. A note of caution: the crematorium is still in use, so be sure to proceed with sensitivity and awareness. 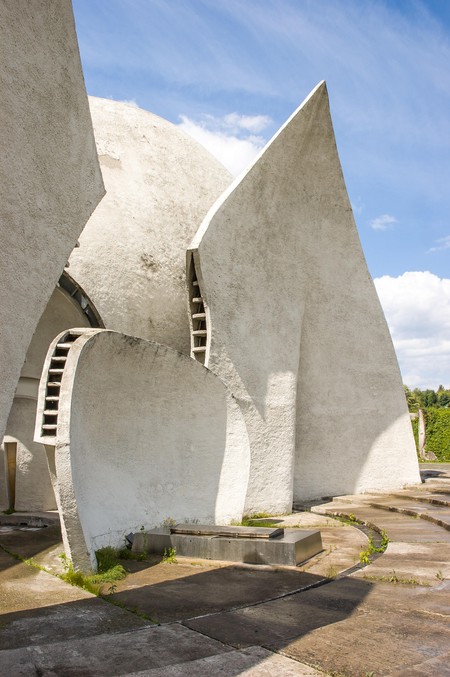 Dine by candlelight at Kosatka

Take the metro back to Maidan Nezalezhnosti and walk up the hill to Kosatka, which means ‘killer whale’ in Ukrainian. Cosy and candlelit, this restaurant offers excellent wine, cocktails and food, including some delicious vegetarian options. Try the pear salad and a ‘Boyar’ shot of vodka, grenadine and tabasco, if you’re feeling brave.

Finish up on Reitarska Street

If Kyiv hasn’t worn you out yet, walk towards Golden Gate metro and Reitarska Street, one of the coolest streets in the city and a bar hotspot. Here you can round off the day with drinks at Zig Zag, Malevich wine bar or Bar/13, which does a great Bloody Mary. Alternatively, try your luck at Rytsar, a curious medieval-themed cross between a pub and an off-licence with a suit of armour in the window. The Naked Room, a gallery with an impressive art bookshop and tons of evening discussions and events, is located on Reitarska and open until 11pm every day.