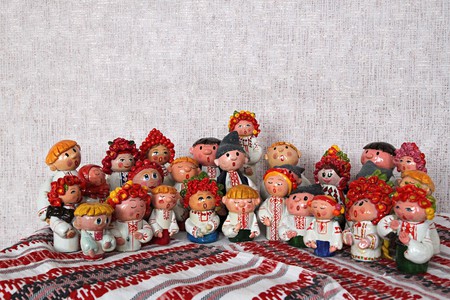 Traditional Ukrainian clothing has conquered the hearts of the world’s most fashionable people, thus making it popular beyond the traditional concept of it. The reasons for such hype include a simplicity in form, a slender silhouette, a variety of symbols and ornamentation, and the rich colours used.

Traditional Ukrainian apparel — the roots of which trace back to the times of Kievan Rus — has many stylistic varieties. Its look depends on the ethnographic region, even though a homemade shirt, made of homespun cloth, has always constituted the basis for both male and female wardrobes. The main feature of this shirt (vyshyvanka) is the embroidery on the neck, cuffs and hem. 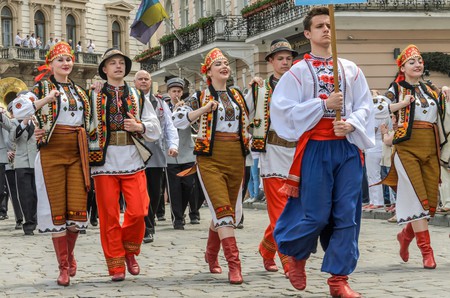 A girl is supposed to wear a shirt without outerwear, while a married woman has to cover her head with a shawl and supplement the outfit with her waistcoat and maxi skirt. Meanwhile, the highlight of the clothing are accessories like belts, jewellery and headdresses (a shawl or a floral wreath), decorated with ribbons and fresh and artificial flowers, not to mention the abundance of beads and ducats (coins), which determine the women’s status. Men’s traditional clothing is simpler: they resemble the outfits of other Slavic nations but differ in the way they are worn. Thus, there are two main elements: a linen shirt and cloth pants, distinguished by the kind of embroidery.

The clothing of Northern Ukraine was distinguished by the modesty of traditional decorative elements. A fair amount of attention was paid to weaving and embroidering in monochrome or bicolour combinations. Black and red threads symbolized the wisdom and courage of generations, while red and white embroidery signified purity and happiness. Thus, the apparel design in Polisia (a historical region in Northern Ukraine and Central Europe) was quite restrained and had clear geometric ornamental patterns. 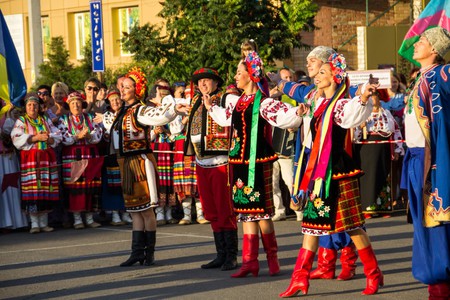 The fashion of the southern regions differed in certain details; for example, the bright embroidery of red, yellow and green colours was placed on the shirt’s open neck. In addition, the clothing was elaborated with a significant amount of jewellery and belts. Quite often the patterns had plant and floral ornamentation: grape branches and Malva flowers were popular. Therefore, in Southern Ukraine, you can see the particularities of traditional clothing through their different way of life and through the ethnocultural interaction between Ukrainians and Moldovans.

Western Ukrainian apparel reflected its Polish and Hungarian historical past and was distinguished by complex geometrical patterns. The richness of decorative elements like embroidery, weaving and appliqué prevailed in the Carpathian region. However, the geometric ornamental motifs of rhombuses, triangles and crosses were implemented in the multicoloured embroidery with a predominance of red and black. The clothing was also decorated with coloured beads, silver or gold thread and metal elements. Hutsuls (an ethnic group of Ukrainians that inhabited the Carpathian Mountains) decorated the bottom edge of trousers with embroidery from the inside — yellow and green woolen threads — and folded it upwards. 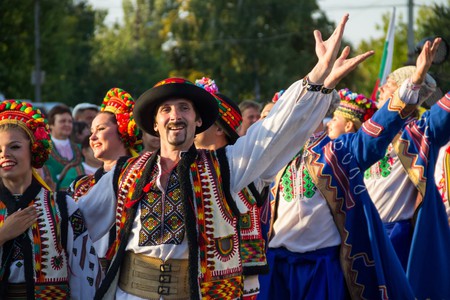 The traditional apparel of Eastern Ukraine is a combination of both the local features of the ancient Slavic clothing and Russian cultural influence. So, shirts preserved the simple tailoring with narrow sleeves and neat decoration on the sleeve’s cuff. Multicoloured embroidery was complemented by elements like bright ribbons, lace and grey fringe. Ornamental elements and waist accessories also played a significant role and were appliquéd from brocade or cotton velvet.

The central areas like Poltava were characterized by white-on-white embroidery and also by a large amount of black and red patterns. The ornamentation was geometric or vegetative, and considerably less zoomorphic. In the 20th century, women began to use multicoloured threads to decorate shirts, while in the 17th and 19th centuries the embroidery was minimalistic — just red and blue on white. Another key feature was the decoration of sleeveless and outer clothing with a cotton appliqué. 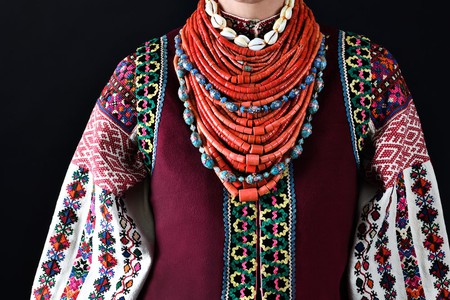