Lasting Imprint: The Rebirth of a Radical Bookshop 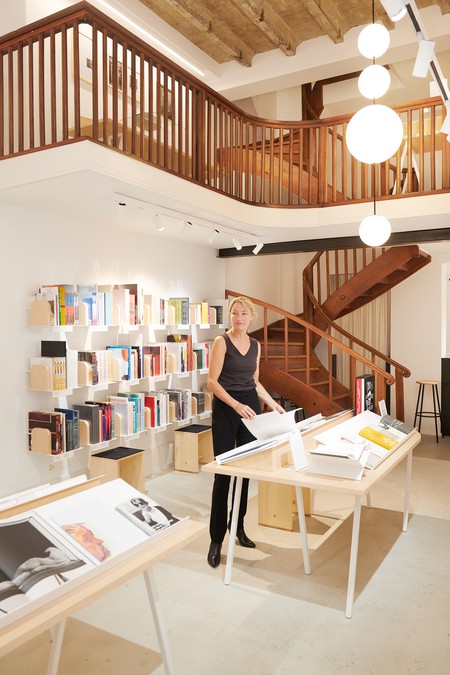 An unassuming bookshop in Zürich once united exiled writers, a radical publisher and the most famous Swiss artist of the post-war era, Max Bill. Fifteen years after closing, it has been reborn as the publishing headquarters of international art gallery Hauser & Wirth, whose thoughtful restoration has reinvigorated much more than the building’s original features. 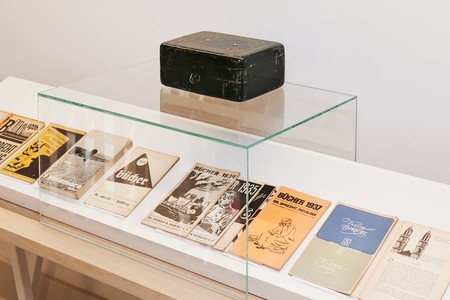 The Hauser & Wirth publishing house is part bookshop and archive, and pays homage to its past with displays of publications produced on the property | © Younès Klouche / Culture Trip

In 1933 Germany burned. As the shell of the Reichstag smouldered, so too did piles of books by writers deemed too Left-wing, too bourgeois or simply too Jewish to belong in the Germany that Hitler aimed to build. The country’s intellectuals fled in their thousands – some to more liberal parts of Europe, others onwards to the United States. Among the brightest was author Thomas Mann, a vociferous critic of the Nazis. Settling in Zürich before the outbreak of war, Mann discovered here an emerging circle of radical thinkers centred on the Oprecht & Helbling bookshop and Europa Verlag publishing house.

Founded by Emil and Emmie Oprecht at Rämistrasse 5 in the same year as the Reichstag fire, eight years after their bookshop opened, Europa Verlag offered a platform to Mann and other exiled writers, including Expressionist poet Else Lasker-Schüler and prominent anti-Fascist Ignazio Silone. In response to events north of the border, it also published Information, a magazine brimming with splenetic energy, under the art direction of Swiss artist and designer Max Bill. 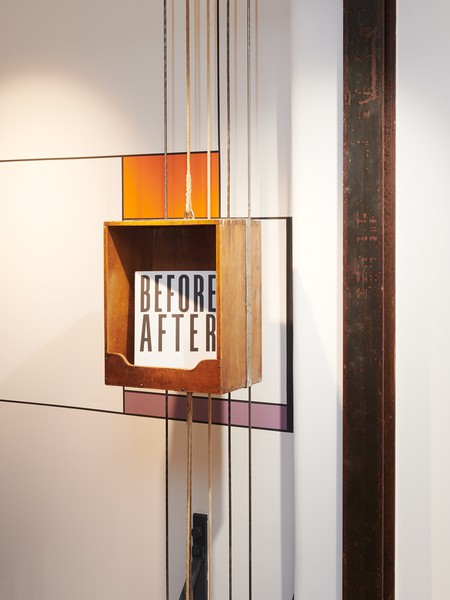 Dissent came at a cost. The Oprechts’ stance prompted their expulsion from the German Publishers and Booksellers Association, in 1937. Besieged by financial difficulties, Europa Verlag struggled valiantly through the 1940s, and gradually faded from view following Emil’s death, in 1952. The bookshop survived under various guises until 2003, when a travel agency took over the premises. In summer 2019, Hauser & Wirth held a major retrospective of Max Bill’s work at its Zürich gallery, timed to coincide with both the Bauhaus centenary and the opening of its new publishing headquarters, across town, in the old Oprecht bookshop. The building’s history makes it a natural home for the gallery’s publishing arm, according to Dr Michaela Unterdörfer, who, since 2005, has overseen its growth. “Our hope is that this new headquarters and bookshop will once again be a site for imaginative discourse,” says Unterdörfer. “And that it will attract a similarly diverse audience, from artists and bibliophiles to art publishers and scholars.” 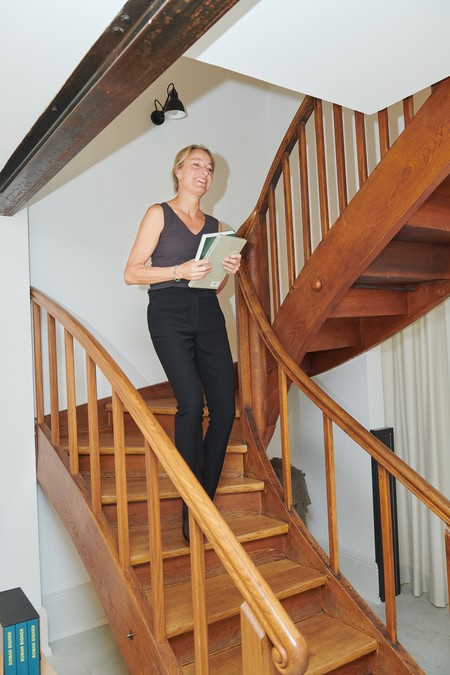 And what of the renovated space? Well, it is much sparser than in the Oprechts’ day, when it possessed the cluttered charm of a rampant publisher. Hauser & Wirth, by contrast, releases just 25 titles a year. The white-walled minimalism reflects the brand’s primary concern as a gallery; however, the spaces are full of references to the building’s history. On the bright ground floor, Hauser & Wirth monographs and catalogues are carefully displayed on shelves, lectern-topped tables and, as keen eyes will recognise, Ulm stools; Bill designed these for his students while head of the influential German design school from which their name derives. Towards the back, there is a bar based on a 1932 sketch titled Bar (interior) with red, orange, yellow, green, violet by Bill’s friend, collaborator and fellow Abstractionist Georges Vantongerloo.

A fully restored wooden staircase twists up to a mezzanine presenting an archival display of the Oprechts’ work, and on up to a second-floor office. Provided you are a book, the stairs can be bypassed using a pulley system. Lighter volumes zip up and down in the small wooden box; heavier volumes – a Louise Bourgeois and Pablo Picasso exhibition catalogue, say – pose more of a challenge.

Rämistrasse has changed little since the 1930s and ’40s. The street, a handsome Classical tapestry occasionally shot through with Art Nouveau apartment blocks, is notably free of additions from the latter half of the 20th century. Reassuringly, the haunts Europa Verlag writers frequented are still open for business. Opposite Hauser & Wirth, across the tramlines, is the famed Kronenhalle restaurant. Before the Oprecht set, James Joyce was a regular here, reputedly breaking into song following determined consumption of fendant, Switzerland’s best-known white wine. In subsequent decades, it hosted Coco Chanel, Alberto Giacometti and Yves Saint Laurent. Just around the corner, down towards the Limmat, a crystalline ribbon of water flowing north out of Lake Zürich, sits Café Odeon, a legendary bar where the Dadaists, Albert Einstein and countless barflies of lesser consequence enjoyed its louche atmosphere and Art Nouveau decor. The avant garde has all but disappeared, but the backdrop – rich marble, glittering chandeliers and polished brass – remains. 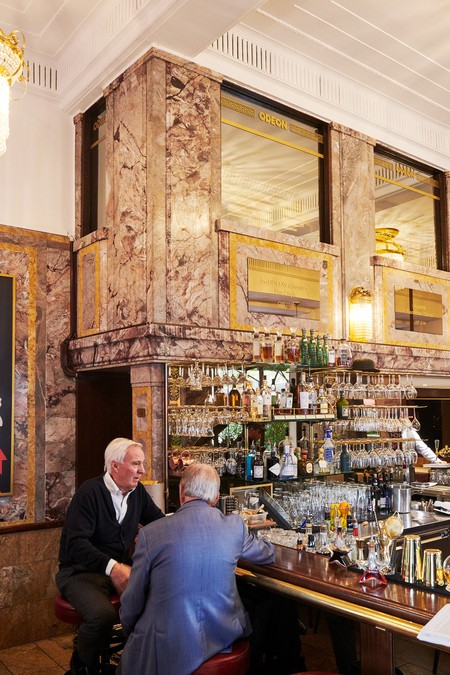 Café Odeon, around the corner from Hauser & Wirth, has played host to many legendary thinkers | © Younès Klouche / Culture Trip

At Café Odeon and Kronenhalle, time, the cliché goes, has stood still. Hauser & Wirth’s sensitive restoration of the Oprechts’ bookshop and publishing house achieves something different: it revives and reinvents not just the material elements of a treasured place past – a dumbwaiter, a stairwell, a press – but the spirit of the age that produced them. The titles on display today – Planting the Oudolf Gardens at Hauser & Wirth Somerset (a navel-gazing horticultural memorandum) and Sensitive Geometries (an apostolic journey into Brazilian Constructivism via a dozen of its exponents) – are closer to aesthetic bibles than anti-Facist manifestos, but they’re evidence, nevertheless, of a space for intellectual enquiry reclaimed. 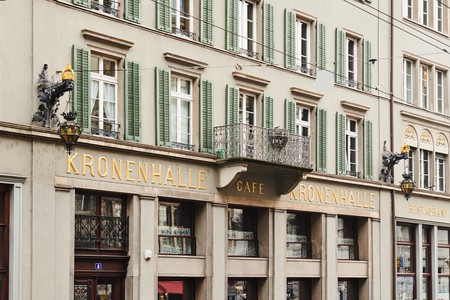