Why Stockholm is a Collector's Paradise 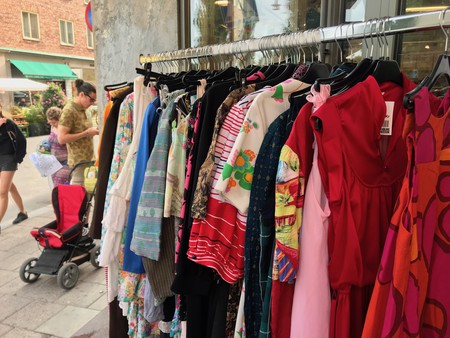 Stockholm is home to an excellent variety of second-hand stores for collectors of all things vintage. The culture of restoration and preservation of resources, appreciation of excellent craftsmanship and a fundamental eco-consciousness allows for this second-hand market to thrive not just in Stockholm, but countrywide. For example, the large Swedish department store Åhlèns has placed a fashion recycling box in each of their stores throughout the country. These items are then delivered to Stads Missionen sorting facilities. Stads Missionen is a non-profit organisation that assists the homeless, impoverished and out-of-work by selling donated merchandise in their stores.

A post shared by Stockholms Stadsmission (@stockholmsstadsmission) on Jan 8, 2018 at 11:27pm PST

“I believe that the trend to donate clothes and buy second-hand has grown largely in recent years. In Stockholm, Stads Missionen is receiving so much material and support that they have been growing at a rate of a new store every six months,” says Lexie Lööw at the Nytorget store.

“There is a storage facility in Sätra with nearly 100 staff on site where the bulk of merchandise is sorted. They send the trendiest vintage fashion mainly to the outlet in Nytorget, South Stockholm because our customer base has shown a strong interest in vintage fashion merchandise,” explains Lööw. She says young Swedes “are more informed about the environment and how each individual can do their part.” That is one explanation for a growing interest in recycling fashion. “There is also a marked interest from retirees and pensioners,” she goes on to say.

The Stads Missionen Fridhemsplan caters to those shoppers, in particular, the “kultur-tant” which translates to the “culture-aunt”, an affectionate nickname for senior women who frequent theatres, music halls and exhibitions. The Fridhemsplan Stads Missionen store has an excellent offering of high-quality, tailored fashion pieces like wool suits, smart casual dresses and men’s formalwear, overcoats, kimonos and even the occasional vintage furs. Lööw highlights another perk for the vintage shopper by describing the staff at the Fridhemsplan store where she previously worked: “They offer an alternative shopping experience where they take time to talk to their customers and listen to their stories about the items they bring in there.”

Some of the window displays at these outlets are on par with high-street stores. We all know fashion repeats itself, so these vintage pieces are always on trend. The visual merchandising efforts of Stads Missionen are enough to inspire even the most reluctant shopper to come in and have a look around.

Collectors of antique furniture, porcelain and glass have the whole city to explore, from auction houses to the Salvation-Army type shops, Myrorna and small boutique stores on Upplandsgatan in Vasastan. In addition, there are vintage haute couture resellers in the posh, east-side neighbourhood Östermalm and the hipster-heavy, super trendy boutiques on the southern island of Södermalm.

Previous generations lived the DIY lifestyle even to the extent of rebinding books at home, repairing clothes and shoes. Today it is quite expensive to reupholster furniture because there are so few craftsmen/women who do it for a living. But the option to refurbish is still a viable one, especially with the availability and affordability of vintage pieces in the Swedish market. Outside this bracket is the Scandinavian designer chair, which is expensive to start with, whether it’s new or vintage.

American-brand clothing for the collector can be found at Beyond Retro, which only sells vintage clothes imported from US warehouses. To up your shoe game, pay a visit to Sneakersnstuff, which focuses on collectible designer sneakers.

The consumer appetites of today with disposable clothes are slowly being tempered by large companies, such as H&M, inspiring recycling of fabrics in most of their stores and offering discounts for every bag of clothes recycled as an added incentive. Weekday is one of their stores and it has been selling second-hand clothes alongside new merchandise for some years now.

Read our guide to the best vintage stores in Stockholm.