The Most Unique Experiences You Can Have in Sweden 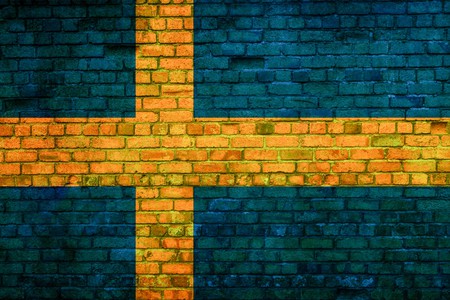 Swedes take a serious delight in the quirky side of life and that means Sweden is a hotbed of unique experiences and things to see and do. Here are some of the best.

The Tree Hotel has become something of a legend not just in Sweden but all over the world. With rooms hovering in the trees, in the shape of spaceships or mirrored boxes that reflect the forest around them, it’s one of the most unique hotel experiences in the world, not to mention one of the most luxurious, because while you might be sleeping in a spaceship everything you need is at your fingertips. 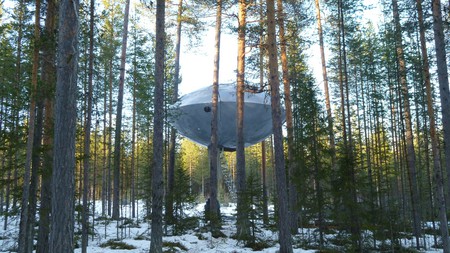 Sweden may be known for world-class innovation and success but that doesn’t mean they don’t appreciate the lessons learned from failure. Or a good laugh. The Museum of Failure is a collection of some of the most interesting failures in the world, reflecting the fact that the majority of all innovative projects fail. With more than 60 failed products and services, there are some big lessons to be learned here. 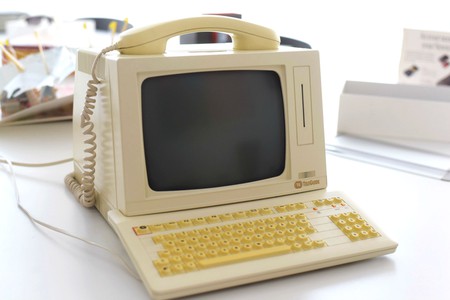 Open between April and October, the Utter Inn has been described as one of the most unusual hotels in Sweden. We’d like to call it one of the more innovative. The floating underwater hotel was dreamed up by local artist Mikael Genberg and all that is visible from the surface is the small hut (which holds the kitchen) and deck. Go down a flight of stairs, though, and you’re in the bedroom, 3 metres beneath the water’s surface where you get panoramic underwater views in all four directions. 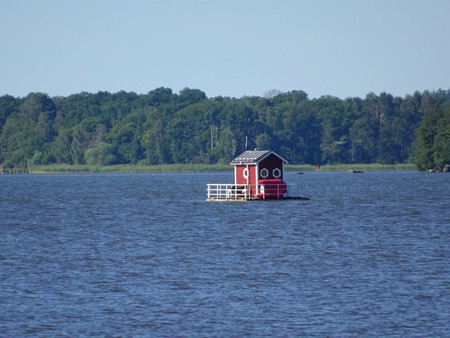 It’s Europe’s largest car cemetery, buried deep in the pine trees of Sweden’s vast forests. It is said that the cemetery developed organically when Sweden switched from driving on the left-hand side of the road to the right in 1967. There are more than one thousand cars scattered in the area, and interestingly, Bastnäs (which is just an hour’s drive from Oslo) is also famous as the location for the discovery of the chemical element Cerium in 1803. 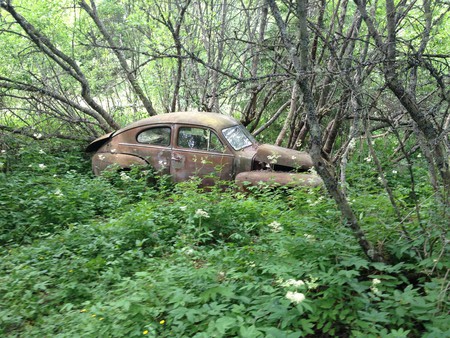 It’s the world’s only mounted blue whale, which may not sound like much, until you see it that is. A young blue whale was beached on the rocks of Askim Bay, close to Gothenburg, in 1865. Back then, rescue wasn’t really considered an option, so the whale was duly – and brutally – slaughtered. In short order, the curator from the Gothenburg Museum showed up, bought the carcass and created the unique exhibition that we see today, which allows visitors to climb into the hinged jaw (although after a couple was found having sex inside the jaw in the 1930s it is now opened only on special days.) 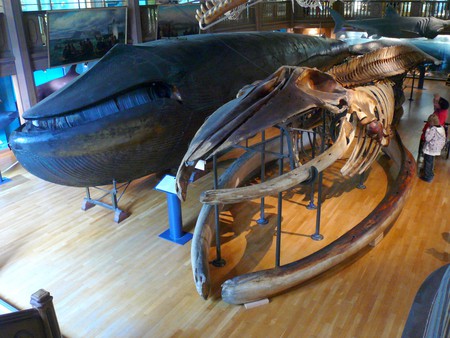 Every Christmas season, about two hours north of Stockholm, the village of Gävle erects a giant Swedish Yule Goat (Gävlebocken) in its central square. The goat is made of straw and was first erected in 1966, since when, in one of those odd traditions that Swedes are so famous for, it’s been set alight 37 times. In fact, it’s a point of discussion in Sweden during the holidays, with people casually checking in to see if the goat has been torched. If this happens before Lucia (the 13th of December) it will be rebuilt. In 1996 cameras were installed to keep an eye on the goat but hackers circumvented that clever ruse, allowing the vandals to strike. If you’re in Sweden during Christmas, do keep an ear attuned to what’s happening in Gävle, because if it goes up in smoke everyone will be talking about it. 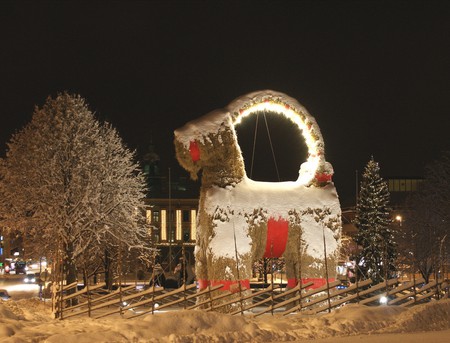 Colour by Numbers, the permanent light installation at Telefonplan in Stockholm, is the result of a collaboration between interaction designer Loove Broms, architect Milo Lavén, and artist Erik Krikortz. The project allows anyone with a mobile phone to change the colours of the lights in the tower, either by calling or using an app. It can get pretty interesting as people are struck by the creative urge as they make their way home from the clubs late at night. 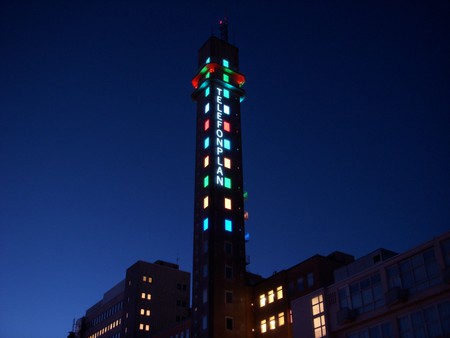 There is only one functioning sun cannon left in the world and you can find it in the small Swedish town of Åtvidaberg. Built in 1853 the cannon was originally part of Adelsnäs Manor’s English park and at one point fell into slight disarray, but in 1986 The Sun Cannon Club brought it back to life and since then the cannon has been fired every day at 1 pm from May through September. You can also contact the Sun Cannon Club to take your own ‘shot’.

This scrappy Norwegian Spruce that looks like it would have a tough time holding itself together in even a light breeze is, at 9 500 years old, the world’s oldest tree. Discovered in 2004 by Leif Kullman, the Professor of Physical Geography at Umeå University (who nicknamed it after his Siberian Husky), the age of the tree was determined by carbon dating. 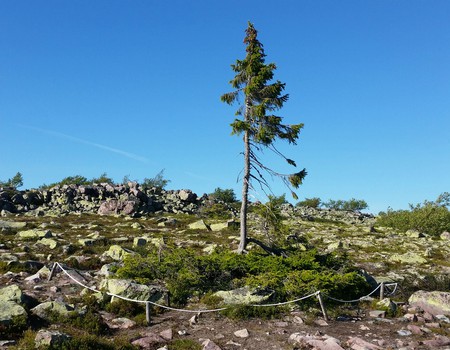 Rondellhund – Roundabout Dog in English – began in 2006 as a response to the vandalisation of a public art installation in Lindköping. A concrete dog was part of the official roundabout installation Cirkulation II but, when it was vandalised, someone built a wooden dog and placed it on the roundabout. Soon another anonymous artist gave the wooden dog replacement a concrete dog bone and, before you knew it, roundabout dogs began appearing all over the country, not just in the middle of roundabouts but tied to lampposts and street signs. The phenomenon has died down considerably but the dogs still pop up here and there, not just in Sweden but in countries around the world, including the UK and Australia. 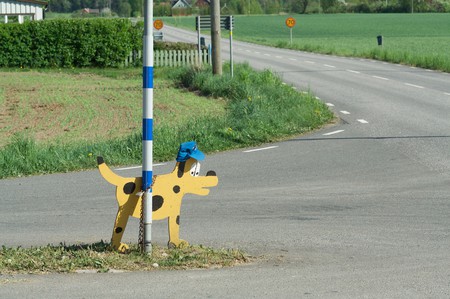 You'll find Rondellhunds all over the country | ©Ulf K / Flickr

Also known as the Devil’s Bible, Codex Gigas is known for two things: one, it’s said to be the largest surviving Medieval European manuscript (Codex Gigas means ‘giant book’) and two, it features a massive full-page portrait of the Devil. There is an online digitised version of every page in the book, as well as a lot of background information, but the original is still kept at Stockholm‘s Kungliga Biblioteket, the National Library of Sweden. 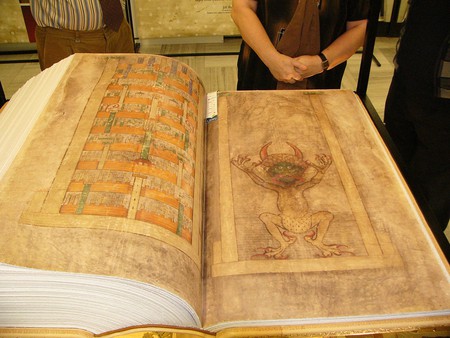