The Best Movies by Pedro Almodóvar You Should Watch

Oscar-winning director and screen-writer Pedro Almodóvar has produced dozens of unique, profound and sometimes controversial films, becoming an internationally recognized filmmaker, and one of the most famous outside Hollywood. His films tell stories of lost loves, tales of life and death, and even of one airplane in danger. Mostly profound, but with hints of humor, Pedro Almodóvar’s works are innovative and gripping; here we list his most unmissable films.

Recently adapted for the West End stage, indicating the success of this film; the black comedy-drama Women on the Verge of a Nervous Breakdown tells the tale of Pepa after her lover Ivan leaves her without explanation. The story follows her as she embarks on a journey to discover why this happened; along the way, she meets Ivan’s son from a previous relationship, his lawyer, and a terrorist, amongst other questionable and intriguing characters. This is a unique spin on a romantic comedy, with a combination of hysterical and emotional moments scattered throughout.

Talk To Her tells the story of two coma victims, a ballerina, and a female bullfighter, as well as their two boyfriends who sit by their sides. The four of them form the unlikely friendship group of two unconscious women and two slightly obsessive boyfriends; until their relationship is called into question after an unpleasant incident at the hospital. Concentrating on the two men and the relationship that forms between them in the hospital, Almodóvar shows two ways that the men deal with the same tragedy. This film is yet another demonstration of Almodóvar’s emotional intelligence as he takes us on a journey through the different faces of love, compassion and attention. Talk To Her confronts the sometimes unwilling viewer with the realities of life and death. However, it is these disturbing parts which give the film such impact. 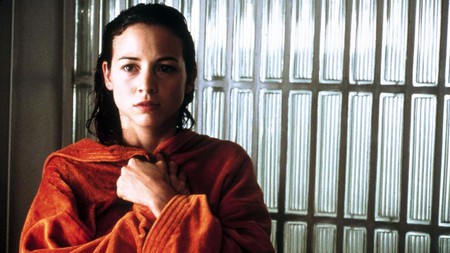 Talk To Her | © Sony Pictures Classic

One of Almodóvar’s most famous films, All About My Mother tells the story of Manuela, an administrator who works in a hospital in Madrid. Her main role is teaching junior doctors how to deal with asking bereaved relatives’ permission to used their loved ones’ organs. However, Manuela soon learns what it is like to be this bereaved character she has long played when her 18 year old son dies in a tragic accident. The death of her son pushes her into a journey leading her to the father of her son and a host of other weird and wonderful characters. With the motif of female companionship and sisterhood, and breaching the issues of love and loss, this film is a deep and memorable watch.

All About My Mother | © Sony Pictures Classics

Live Flesh is a visually creative and psychologically compelling film, featuring drugs, violence and sex, while simultaneously delving deep into the realities of love and longing, death and rebirth. It exposes how relationships change in ways that are often never convenient for both sides. Arguably his most mature and restrained film, it is a melodrama about 5 people living in modern Madrid, who find themselves linked in brutal and unexpected ways.

Broken Embraces tells the story of a blind Spanish filmmaker who revisits a tragic episode in his past in which he lost his sight and his love. It explores the story of a woman who featured in one of his films when the filmmaker was not yet blind and her jealous husband’s intervention, creating oppressive overtones. This is a story of passion, obsession, wealth, jealousy, guilt and creativity.

An intense psychological thriller, The Skin I Live In features a top plastic surgeon who, haunted by the death of his wife who was burnt in a car crash, creates a synthetic skin which is able to withstand burns and insect bites. His illegal guinea pig is a mysterious and volatile woman who he keeps captive on a secluded island with the help of his most loyal maid. This is a classic horror, with a mad scientist, body parts, revenge, and captives, and Almodóvar maintains the emotional intensity of the story throughout with the help of lead actor, Antonio Banderas.

One of Almodóvar’s more recent films, I’m So Excited adopts a less serious tone than most of his collection. This film follows the passengers and crew of a plane headed for Mexico City, and their attempts to deal with moments of anguish and danger. Uniquely so, the film is set almost completely in one location, the inside of the plane itself, with occasional ventures to the ground below to follow the back-stories of certain characters. Almodóvar achieved something special by successfully managing to grip the audience, despite the lack of scene changes, almost certainly thanks to his use of humor and a unique group of characters. This film offers a much lighter alternative to many of Almodóvar’s other films.