The 10 Best Spanish Films: From Franco to La Movida and Beyond 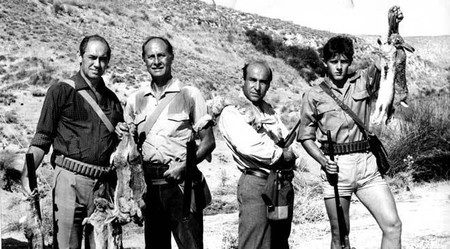 The development of Spanish cinema is tied to the tumultuous history of the country itself, as Brit Cowan reveals with these ten classic Spanish films, which embody the upheavals within Spanish society.

Spanish cinema as a whole is impossible to separate from Spanish history and politics. The country was torn apart by a bloody civil war, and then ruled over by Francisco Franco, a semi-fascist dictator, for decades. Creativity was kept under the thumb of Franco’s culture ministries, and open disapproval of the regime was impossible. Several prominent filmmakers fled the country, and those who stayed or grew up with this cultural repression were under strict government censorship. Unable to fully express themselves, artists shrouded social criticism in metaphor and symbolism to slip past the censors, as in Carlos Saura’s La Caza (1966) which was a subtle allegory of fascist aggression during the Civil War told via a rabbit hunt.

After the death of Franco in 1975, a cultural revolution, the Movida, began in Madrid. Music, art, theatre, and film blossomed. Sex, drugs, and homosexuality, once strictly taboo, came out into the open. The Movida was the backlash against everything before, resulting in hedonism and apoliticism. This sudden freedom, however, soon led to an atmosphere of indulgence and excess, as many in the Movida succumbed to drugs or AIDS. It was during this time that Pedro Almodóvar began his career, celebrating the people who were marginalized and unable to be themselves under the authoritarian regime, and speaking to an audience which wanted to forget the past.

The new generation of Spanish filmmakers, however, is international and cine-literate, having grown up without censorship or political isolation. Many make films in languages other than Spanish. But contemporary Spanish cinema, with an emphasis on escapist fantasy and ghostly horror, is still recovering from its history, illustrating this cultural trauma through recurring themes of children and identity. As a result, even today, many Spanish films are reflections on, allegories of, or direct reactions against the violence of the past.

Made during the height of the Franco regime, Welcome Mr. Marshall! (¡Bienvenido, Mister Marshall!) is a strong social commentary disguised as a light-hearted comedy about Spanish and American cultural misconceptions. An idyllic rural town, the kind championed by Franco’s ideology, awaits the arrival of American diplomats. The villagers don traditional clothing and hire flamenco dancers in the misguided belief that the Americans are expecting those stereotypes. They re-decorate their town with all the falsities of a Hollywood set, masking their true poverty in a picturesque façade. The film subtly critiques the submissiveness of Spanish society to Francoist mythmaking and its isolation from the increasingly modern world.

After years of making films in exile in France and Mexico, Luis Buñuel returned to Spain to make Viridiana, the story of a naïve, pious woman, played by Silvia Pinal, who tries to do good while visiting her lascivious uncle, Buñuel regular Fernando Rey. The film contains many of the Buñuel staples of surrealist imagery, anti-bourgeoisie and anti-clerical themes, and sexual fetishism. Surprisingly it passed Franco’s censors, with the exception of the ending, which Buñuel rewrote to be seemingly innocent but actually much more devious. When the film, which contains a scene of vagrants posing like The Last Supper during a bacchanal, won the Palme d’Or at the 1961 Cannes Film Festival, the Vatican denounced it as blasphemous, and it was quickly banned in Spain.

Hidden in the story of Ana, a young girl who mistakes a wounded republican soldier for the spirit of Frankenstein’s monster, is a sharp critique of Spanish isolation and oppression during Franco’s regime. With its barren landscapes and stunning cinematography, The Spirit of the Beehive (El espíritu de la colmena), which takes place just after the Civil War, is a haunting portrait of childhood imagination and innocence. Víctor Erice’s first film is simple, slow-paced, and solemn, but poetic in its portrayal of the inner life of a small girl whose fantasies reflect political realities, a theme which influenced Guillermo del Toro’s Pan’s Labyrinth (2006).

Women on the Verge of a Nervous Breakdown – Pedro Almodóvar, 1988

The true auteur to come out of a free, post-Franco Spain was Almodóvar, who received major international acclaim and a Best Foreign Language Film Oscar nomination for Women on the Verge of a Nervous Breakdown (Mujeres al borde de un ataque de nervios). This black comedy, filmed in the style of 1950s American comedies with quick dialogue and screwball action, borders on a farcical soap opera with terrorist plots, suicide attempts, drugged gazpacho, hostages, numerous affairs, and a young Antonio Banderas. With the quirky film filled with colour and camp even when everything seems to be falling apart, Almodóvar introduced the world to his neon aesthetic and his incredibly well-written and dynamic female characters.

The Antichrist will be born in Madrid on Christmas Day, in Álex de la Iglesia’s The Day of the Beast (El día de la Bestia). To kill it and prevent the apocalypse, a priest commits as many sins as possible in order to meet the Devil to find out the exact birthplace of his spawn. De La Iglesia, a former comic book artist and a protégé of Almodóvar, combines horror elements with biting social satire in this macabre comedy. Within the absurd, often slapstick plot, De La Iglesia mocks the apathy of people who accept the horrible world around them without questioning.

A winner of the Oscar for Best Foreign Language Film, All About My Mother (Todo sobre mi madre) tells the story of Manuela, played by Cecilia Roth, journeying to find the father of her recently killed son. By means of Sirkian melodrama and soap opera plot devices, Almodóvar addresses darker issues such as AIDS, drug addiction, and death while presenting his strong female characters, including Penélope Cruz as a pregnant HIV-positive nun, with the utmost sympathy and sincerity. Using his typical brightly-coloured, glossy palette, witty dialogue, and vibrant acting from a cast of overly dramatic actresses and transsexuals, the film explores the nature of theatricality and performance while celebrating the strength, compassion, and resilience of women.

Almodóvar explores the intersection of fantasy, reality, memory, and storytelling in Bad Education (La mala educación), a metafictional revenge mystery involving sexual abuse by Catholic priests, drug use, and transsexuality, with hints of autobiography. As the characters get caught up in temptation, seduction, corruption, and obsession, the layered and passionate film returns to the familiar Almodóvar themes of role-playing and performance, but this time with a murderous twist, a la The Talented Mr. Ripley, Double Indemnity, or Vertigo. The baroque Hitchcockian story combines elements of noir, thriller, and romance, and includes Gael García Bernal in drag as the manipulative femme fatale.

The Sea Inside – Alejandro Amenábar, 2004

Paralyzed from the neck down from a diving accident, Ramón Sampedro has been in the same bed for 28 years and wants to die. The Sea Inside (Mar adentro), the true story of the man who campaigned for euthanasia to preserve his dignity and humanity, won the Oscar for Best Foreign Language Film and was a tour-de-force for Javier Bardem, whose wit and charm reveal the frustration of an active mind in an immobile body. Known for such genre films as Abre los ojos (1997) and The Others (2001), Alejandro Amenábar uses his recurring themes of fantasy and memory to avoid claustrophobia, illustrating Sampedro’s wandering mind through sweeping visuals. Both tragic and uplifting, the film avoids heavy sentimentality and politicization of the issue of euthanasia.

Spain’s inner turmoil in the wake of the Civil War manifests itself in childhood fantasy and imagination come to life in Mexican director Guillermo del Toro’s epic fairy tale Pan’s Labyrinth (El laberinto del fauno), winner of three Oscars. As republican guerillas make their last stand against her fascist, sadistic step-father, young Ofelia retreats into an enchanted, magical world of fairies and mythical creatures where she is given a quest to help her escape her grim reality. Continuing themes from Del Toro’s The Devil’s Backbone (2001), the visually stunning film evokes beautiful yet terrifying bedtime stories, interwoven with a child’s eye view of the vivid horrors of war.

In the debut film of J.A. Bayona, who went on to direct The Impossible (2012), a child goes missing in an abandoned orphanage, and his mother, played by Belén Rueda, suspects his ghostly invisible friends. Produced by Guillermo del Toro, the film’s horror comes not from blood or gore but from its simplicity. A slow ominous camera movement, a bump in the night, and the minimalist creepy music all create a tense atmosphere without cheap scares. But the heart of The Orphanage (El Orfanato) comes from its emotional narrative. Rueda’s performance captures a mother’s pain and loss, and the psychological drama is as moving as the ghost story is terrifying.