A Tour of Ibiza's Architectural Landmarks

<a href="http://www.publicdomainpictures.net/view-image.php?image=174953&amp;picture=ibiza-town-view" target="_blank" rel="noopener noreferrer">Ibiza Town | Petr Kratochvil / Public Domain Pictures</a>
When you think of buildings in Ibiza, it’s hard to picture beyond the whitewashed villas peppering the landscape. But dig a little deeper and find some less obvious examples of Ibizan architecture, each with their own place in the island’s colourful and ever-evolving history. Here we share seven eclectic yet iconic architectural landmarks.

This was the first church established on the island by the Christian conquerors of 1234. Most likely built on the site of a mosque, the building has been adapted and restructured over the years, with its most extensive works completed in 1782, when the church changed status and became a cathedral. Positioned on top of the hill in Ibiza Town, do make the time to enjoy the view from the cathedral. It is well worth the hike. 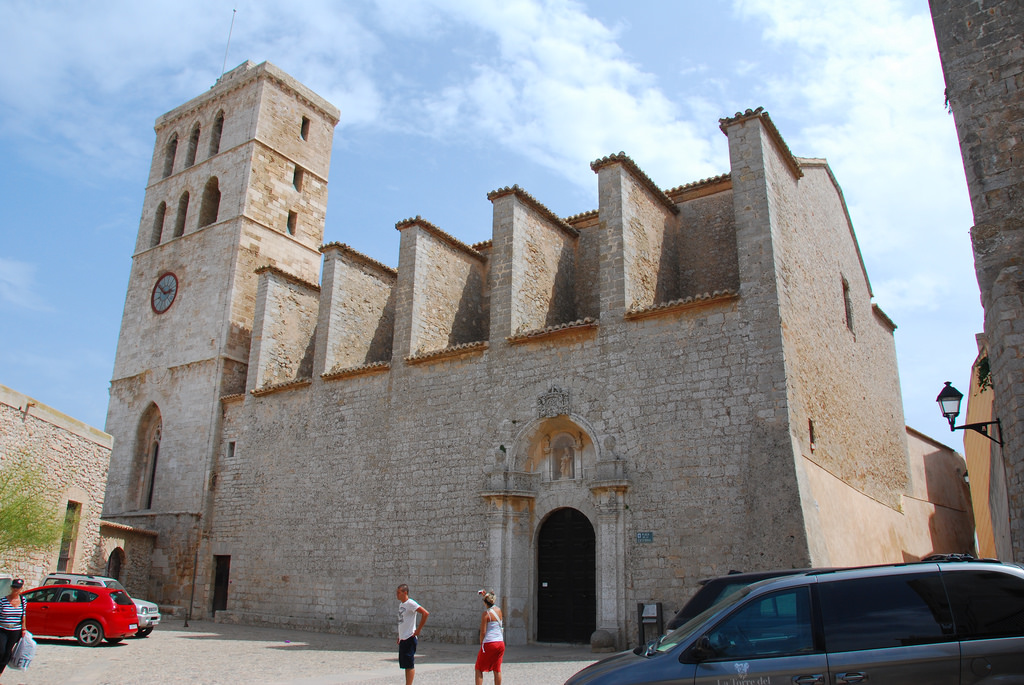 On the outskirts of Santa Eularia des Riu is a fortified church on top of a hill (or puig), one of four fortress temples erected on Ibiza to protect against Turkish and North African invasion. Walk or drive, you’ll wind around the hill passing old terraces houses and excellent 360-degree views until the top. The whitewashed walls of the church and the beautiful views of the bay of Santa Eularia are well worth the stop when passing through. 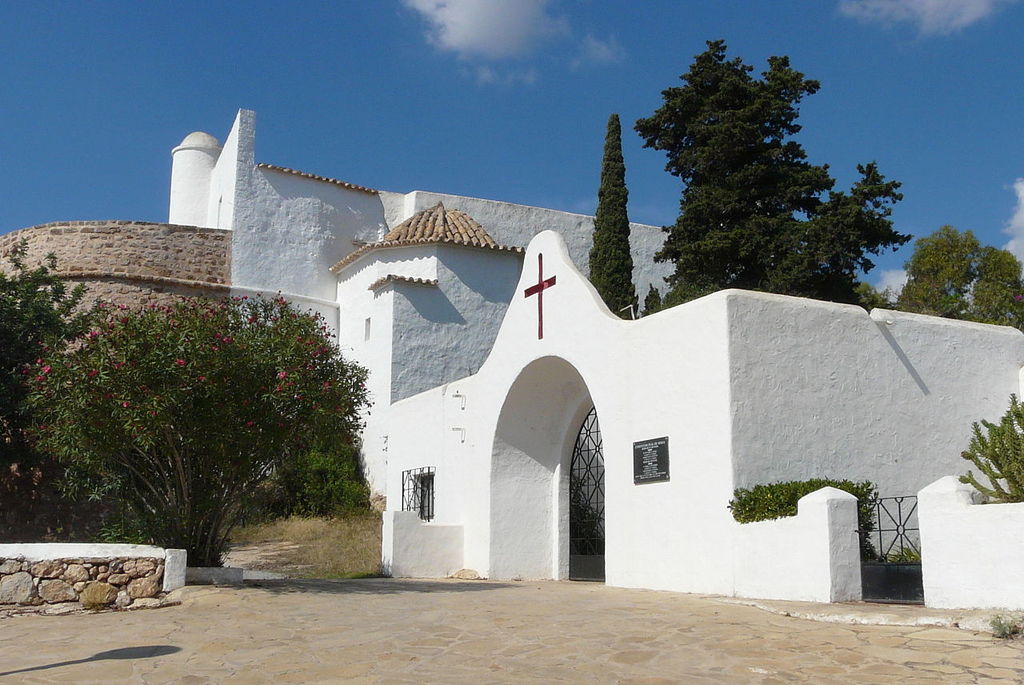 Restaurant, Bar, Spanish, Vegan, Vegetarian, Gluten-free, Beer, Wine, Cocktails, $$$
More a fan of live music than electronic music? Then catch the good vibes of Teatro Pereya, a venue dating back to 1988, when local fisherman used to come to watch a show or have an evening drink. The pink-and-white façade of the building evokes another era, and the inside demands appreciation with the building’s old grandeur, high ceilings and historic charm. With the relaxed atmosphere, friendly local vibe and the music wafting through the air, you’ll feel like you’re in another Ibiza all together.
Looks like it's closed Hours or services may be impacted due to Covid-19
More Info
Open In Google Maps
3 Carrer del Comte de Rosselló, Illes Balears, Eivissa, 7800, Spain
View menu
Visit website
Visit Facebook page
Send an Email
Give us feedback

Opposite Ibiza’s port is a new and exclusive residential complex, Boas de Ibiza, a multi-coloured seven-story modernist creation. Using nature as his guide, architect Jean Nouvel wanted to create a building that integrated with its surrounding landscape: pool water merges with that of the Mediterranean, whilst the curve of the building, which takes its shape from Italian theatres, frames the vista out to sea as if it were a backdrop of a stage. It’s not everyone’s idea of heaven but certainly worth an ogle at before hitting the town.

Hotel
Hotel Montesol is a true symbol of the past. Not only was it the first hotel ever established on Ibiza (back in 1933), but it was used by the army as a base during the Spanish Civil War and WWII. It is now listed as a building of cultural interest in Spain and has become an icon of a bygone Ibizan era. Utterly distinguishable by its yellow-and-white colonial-style façade, it also features a prime location in the buzzing district around the plaza and port of Ibiza.
More Info
Open In Google Maps
2 Passeig de Vara de Rey, Eivissa, Illes Balears, 7800, Spain
+34871515049
View menu
Visit website
Visit Facebook page
Send an Email
Give us feedback

Hotel Es Vivé in Es Figueretas near Ibiza Town adds its own Balearic twist on the art deco design of the 1940s to create this opulent peppermint-coloured hotel unlike anything else in Ibiza. The hotel focuses on bringing elegance, luxury and a sense of other-worldliness, and the fashion and fun crowd come here for a good time. No need to be intimidated – after two of whatever he’s having, you’ll feel right at home.

For an unbeatable view, visit La Torre de Savinar, one of Ibiza’s pirate watch towers that overlooks the islets of Es Vedra and Es Vedranell. It was completed in 1756 with the intention of it becoming an artillery tower; however, its location only ever made it usable as a lookout station. Visitors go through the ramp entrance up to the roof, so make sure to master panoramic photography. 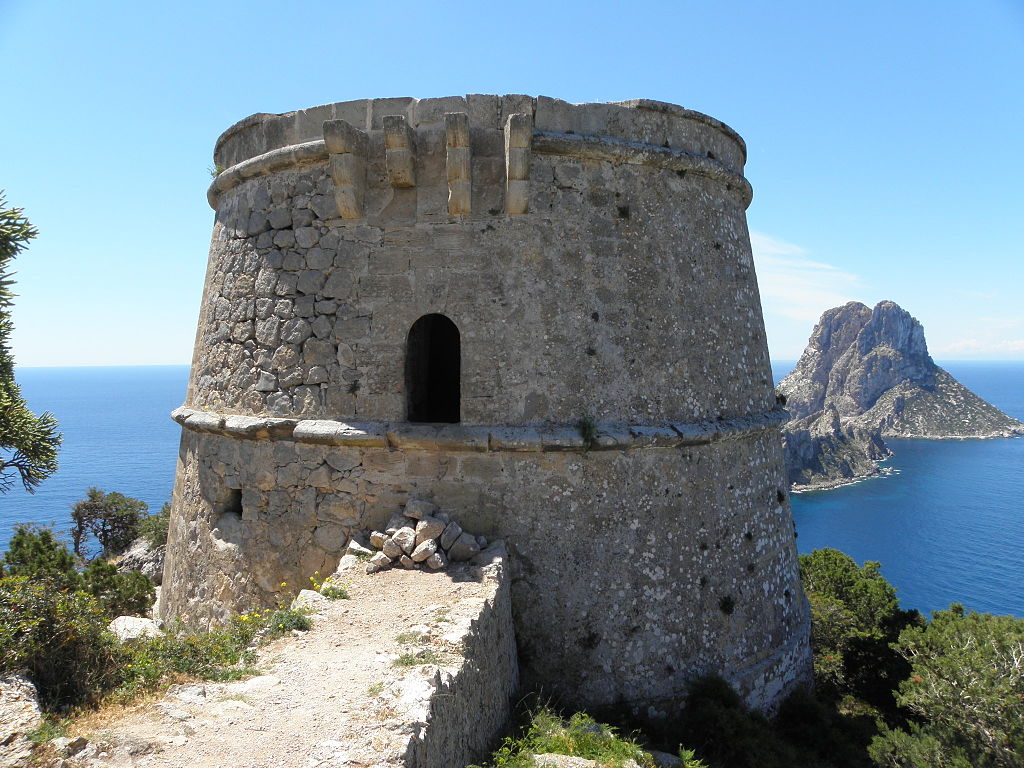