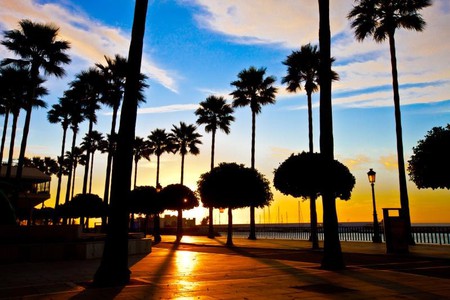 There is something for everyone in Marbella, from beaches and parks to beautiful old buildings and a world-class nightlife. Read on for our pick of the 20 must-visit attractions and things to do in this fashionable city.

Playa de la Fontanilla is Marbella’s main beach and stretches along the southern side of the city. It has all the amenities you’d expect from a popular city beach: rentable sun loungers, showers, watersports, and of course a promenade lined with bars and restaurants offering everything from Indian food to tapas.

A little further to the east from Fontanilla beach, in Marbella’s old fishing quarter, is Playa de la Bajadilla. This is a much smaller, curved stretch of sand that is very crowded in summer beacuse of its calm waters. One of the city’s best seafood restaurants, Puerto Playa, has tables out on Bajadilla’s beach. 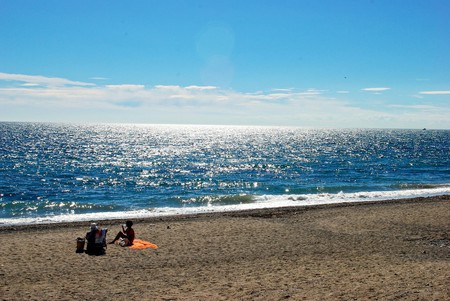 One of Andalusia’s best-kept secrets is Marbella’s beautiful old town, or casco antiguo. A tightly-packed cluster of flower-filled streets, romantic squares, and elegant townhouses, it is just as beguiling as the oldest parts of Granada, Córdoba, and Seville. The best way to experience it is to get lost, which is not hard.

The casco antiguo‘s central square is the Plaza de los Naranjos (Oranges Square), to which all of its narrow cobbled streets eventually seem to lead. Filled with the orange trees that are one of Andalusia’s trademarks, its tapas bars and restaurants have sunny terraces on which to relax with a cold caña (small beer). 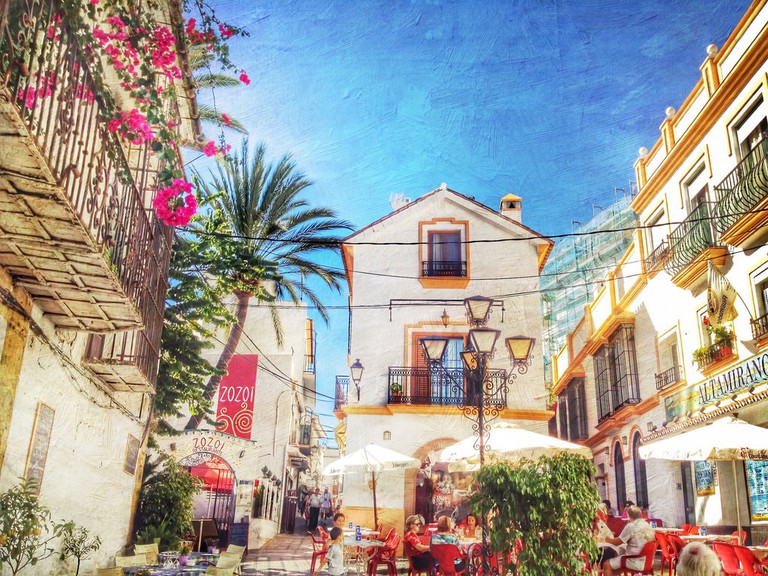 Marbella’s casco antiguo is not all about centuries-old buildings and quaint, narrow streets. It is also home to one of southern Spain’s most chic shopping scenes, boasting as it does an array of classy boutiques. These make for some great window shopping and, if you’ve a flexible budget, provide plenty of oportunity to treat yourself to something new.

Divina Pastora is a lively residential neighbourhood in central Marbella (east of the Represa Park) which is well worth exploring. Locals chatter at the street fruit and veg stalls or over coffee in the no-frills bars after shopping at the barrio‘s market. The local church also houses paintings that depict the different provinces of Andalusia. 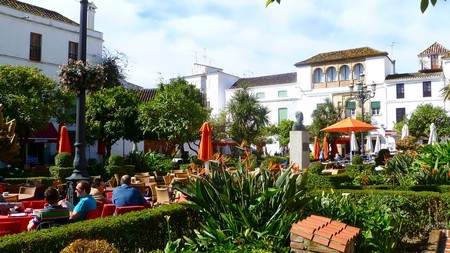 Another of the old town’s most attractive squares is Plaza Santo Cristo, where you’ll find two of the happiest buildings in Marbella: the bright yellow Ana Maria flamenco bar, and the smart maroon of the former café next to it. To your left as you look at them is the 16th century Santo Cristo hermitage.

Museum
Facebook
Email
Twitter
Pinterest
Copy link
Share
Map View
Located to the north of Marbella’s casco antiguo, Miraflores is another of the city’s working, residential neighbourhoods. It has a friendly, local ambience all of its own, and is also home to the Miraflores Cultural Centre, where you’ll find small but intriguing olive oil and archeaological museums.
Open In Google Maps
10 Calle San Pedro de Alcantara, Marbella, Andalucía, 29601, Spain
+34952902714
Give us feedback

It might surprise you to learn that Marbella boasts a world-class collection of Salvador Dalí sculptures. Ten of the Catalonian surrealist’s bronze works are spread out along the Avenida del Mar, a wide boulevard that leads down to the seafront promenade, and are free to view.

Museum
Facebook
Email
Twitter
Pinterest
Copy link
Share
Map View
The only museum of its kind in Spain, the Museo del Grabado Español Contemporaneo is housed in an elegant 16th century building that was once a hospital. The history of Spanish engraving and graphic art is explored throughout its permanent collection, and works by Dalí and Joan Miró are also showcased.
Open In Google Maps
s/n Calle Hospital Bazán, Marbella, Andalucía, 29601, Spain
+34952765741
Visit Website
Give us feedback

A flashy marina located eight kilometres (five miles) to the west of Marbella, Puerto Banús is nowadays one of the Costa del Sol’s most famous destinations. So if you have the time while in Marbella, go and see if you think it’s deserving of its fame (or notoriety). Three words give you an idea of what it’s about: yachts, Ferraris, and boutiques.

Not for nothing is Marbella known the world over for the quality of its nightlife. The sleek bars in its modern town centre (around Avenida Miguel Cano), the celebrity-packed joints along the Golden Mile (in between Marbella and Puerto Banús) and the glitzy nightclubs of Puerto Banús are a party-goers heaven. 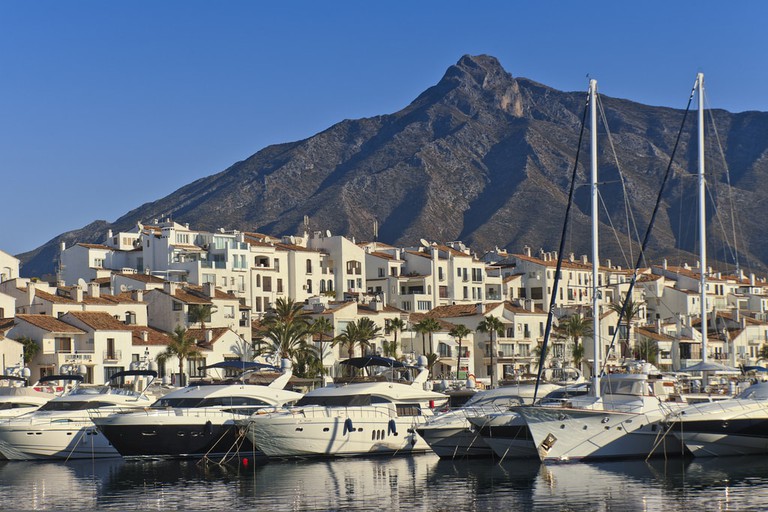 The romantic and tropical-feeling Parque de Alameda lies just behind the Paseo Maritimo in the modern city centre. Its central throroughfare is lined with attractive tiled benches and a beautiful 17th century fountain serves as its centrepiece. An eco foods market is held here on the first Saturday of the month. 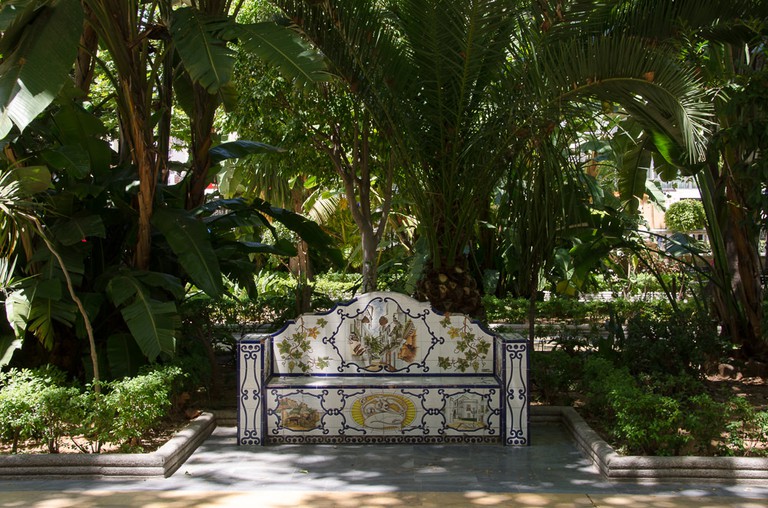 A ceramic bench in Marbella's Alameda Park | © Kamya Adl/Flickr
For a barbecue in the country, head to the spacious Nagüeles National Park. Situated just five kilometres (three miles) north of Marbella, in the foothills of the Sierra Blanca mountains, it has a spacious recreational area equipped with several barbeques and picnic tables, as well as a play and training area for dogs.
Open In Google Maps
29602 Marbella, 29602, Spain
Give us feedback

Park
Facebook
Email
Twitter
Pinterest
Copy link
Share
Map View
Parque de la Constitución is the largest green space in central Marbella. Its shady pathways provide respite from the sun in spring and summer months, during which seasons concerts are staged in the park’s auditorium. A café with outside seating provides the perfect spot for an icecream or cold drink.
Open In Google Maps
14 Avenida Arias Maldonado, Marbella, Andalucía, 29602, Spain
+34952761143
Visit Website
Give us feedback

The only giveaways of Marbella’s long history to be found in the city centre (on the lower western side of Represa Park) are the battered walls and watchtowers that once protected a 9th century fort. They were built in the 10th and 11th centuries, during the city’s period under Moorish rule, and are all that remain of the original structure. 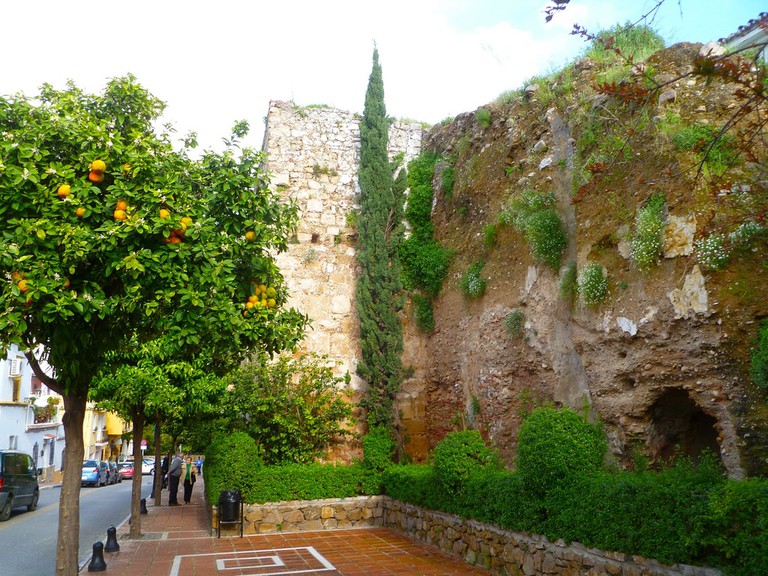 Four of southern Spain’s 13 Michelin-starred restaurants are in Marbella, a city that’s quickly establishing itself as one of Spain’s top culinary destinations. Also impressive is the sheer variety of cuisine found here, as well as the quality of the city’s many seafood restaurants, some of which still cook fish over open fires and barbecues on the beaches. 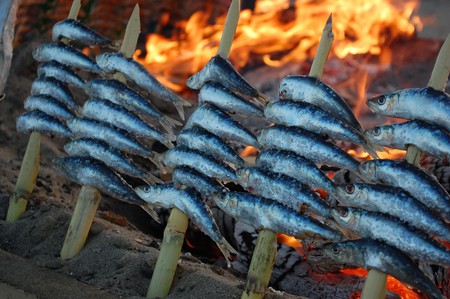 Market
Facebook
Email
Twitter
Pinterest
Copy link
Share
Map View
You’ll find plenty of tourists wandering around Marbella’s main food market (see above), but they’re few and far between in the barrio of Divina Pastora. The latter’s central hub is its colourful and chaotic food market, where you can buy fish caught that very morning in addition to, well, anything else you might want.
Open In Google Maps
Calle José Chacón, Marbella, Andalucía, 29601, Spain
+34952902578
Visit Website
Give us feedback 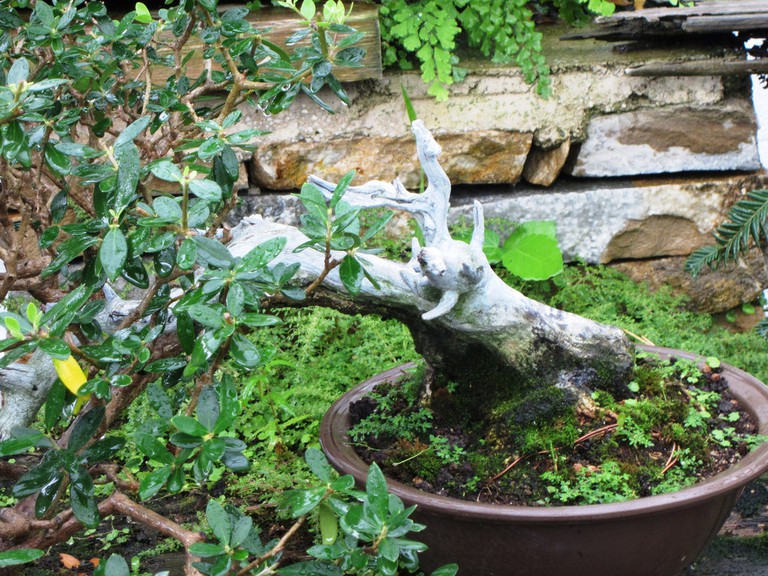 A miniature tree in the Museo del Bonsai | © Annabel Kaye/Flickr
Marbella is the only major Andalusian city to have a musem dedicated to tiny trees. At its intriguing Museo del Bonsai – located in the central Represa Park – you can marvel at these beautiful miniature specimens as well as admiring Europe’s oldest collection of wild olivos (olive trees).
Open In Google Maps
Parque Arroyo de la Represa, Marbella, Málaga Avda. del Doctor Maiz Viñal, 29600, Spain
+34952862926
Give us feedback
Give us feedback