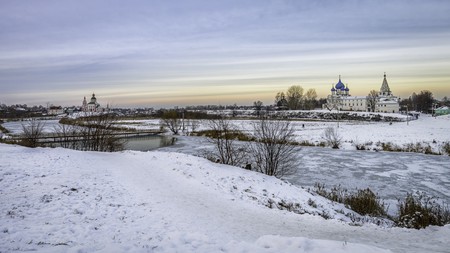 In the popular imagination, virtually all Russia is “north,” cold and imponderable. Yet within this immense Eurasian landmass, there is a region traditionally known as the “Russian North” that includes territories located within or near the basin of the White Sea. This space is crossed by water networks extending from the White Lake (Beloe Ozero) to the White Sea (Beloe Morye). Of special interest are the contemporary regions of Vologda and Arkhangelsk. Despite the cataclysms of the twentieth century, this area of the Russian North still lays claim to a deeply rooted cultural coherence created by those who settled in its forests and moved along its rivers and lakes. 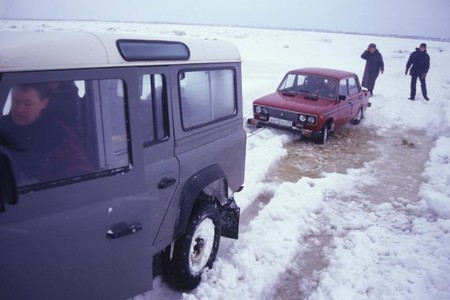 Car being pulled from icy slush on “frozen” surface of Mezen River between Mezen and Kamenka. Photograph: March 8, 2000.

Today, the rivers have silted, and travel in the north occurs by road—or what passes for a road. The vehicle is all. The new Russians have their Mercedes and Cherokees, but for the true connoisseur of the Russian road, the ultimate machine is the UAZIK, Russia’s closest equivalent to the classic Jeep. Four-wheeled drive, two gear sticks, two gas tanks (left and right), taut suspension, high clearance. Seat belts? Don’t ask. The top speed is one hundred kilometers per hour, but you rarely reach that if you drive it over the rutted tracks and potholed back roads for which it was designed.

No place in Russia has more of such roads than Arkhangelsk Province, a vast territory that extends from the White and Barents Seas in the north to its boundary with Vologda Province to the south. A combination of poverty, government default on both a local and national level, and distances that exceed those of most western European countries have created some of the worst roads in European Russia. 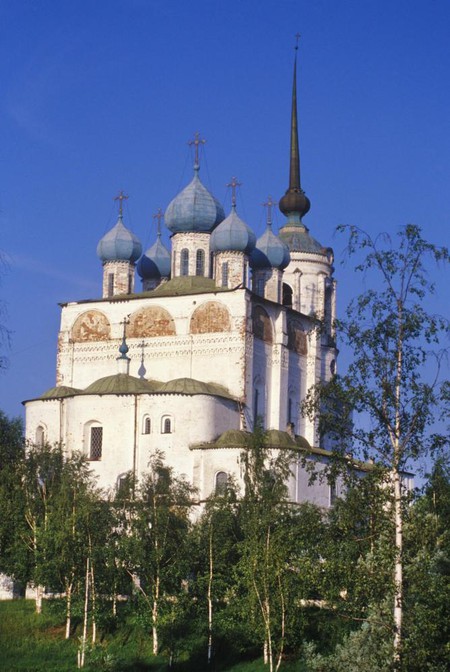 Solvychegodsk. Cathedral of the Annunciation, northeast view. Cathedral was begun in 1560, completed in the early 1570s, but consecrated—like the Vologda St. Sophia Cathedral—only in 1584 (apparently due to Ivan the Terrible’s anger at the church hierarchy). Photograph: June 26, 2000.]

Hence the UAZIK, whose name derives from the acronym for Ulyanovsk Auto Factory, located in the city of Ulyanovsk on the Volga River. Comfortable it is not, but an experienced driver can take this machine over rutted ice tracks in the middle of a snowstorm and not miss a beat. I should say at the outset that I am not such a driver, and I have only a vague idea as to how the machine works. I am, however, fluent in the Russian language, and that ability rescued many a challenging situation.

Although my first photographs of Russia were taken during the summer of 1970, my first limited foray to the North did not occur until 1988 (Kizhi Island), with return trips to the same area in 1991 and 1993. My deeper exploration of the area began only in 1995, but over the preceding two and a half decades I had created a substantial photographic archive and published fundamental books on Russian architectural history—including A History of Russian Architecture (1993, with a second edition in 2004). By the time physical and bureaucratic obstacles to travel in the North were overcome, I was prepared to see this area as an expression of time-honored traditions that I had long studied. After research came the road trips, and the drivers got me where I needed to go. My job was to keep the cameras ready and scan the horizon for onion domes. And in my travels throughout the North, the UAZIK performed superbly with or without roads.

The fact is, roads were an afterthought in the Arkhangelsk territory. Settlers, hunters, and traders moved primarily over a network of rivers, lakes, and portages that defined the area as a geographically distinct cultural entity. Indeed, the settlement of this part of northern Russia, its gradual development, and its eventual assimilation by Muscovy were based on a paradoxical set of circumstances. The wealth of its forests, rivers, lakes, and the White Sea itself promised considerable rewards to those capable of mastering the area; and yet the remoteness of the area, the relative paucity of arable land (usually limited to certain river plains), and the length of the harsh winters discouraged extensive population growth. Those who succeeded in settling the area during the tenth through the thirteenth centuries proved to be sturdy, self-reliant farmers and craftsmen, a mixture of Slavs and Finnic tribes.

Moscow succeeded in colonizing the area during the next two centuries, and by the reign of Ivan the Terrible in the sixteenth century, the Dvina river system had become Russia’s major route east to the Urals and west to England. Although the significance of this network declined after the founding of St. Petersburg, in 1703, the North continued to function as a critical artery, such as during the Second World War and the submarine race during the Cold War.

Nowhere is the former wealth of this area more evident than at Solvychegodsk (“Salt on the Vychegda”), which was once the capital of a Stroganov trading empire. Until recently, getting to Solvychegodsk was no simple matter. Coming from the richly historic town of Veliky Ustiug, some eighty kilometers to the south, one crossed to the east bank of the Northern Dvina over a ramshackle pontoon bridge across the Dvina just south of the grimy city of Kotlas, located at the confluence of the Dvina and Vychegda Rivers. In the winter cars also used a track plowed across the thick ice of the Dvina. Either route winds through the industrial detri tus of Kotlas before reaching a ferry across the Vychegda River.

A ferry in this area typically consists of a small barge capable of carrying one or two vehicles. Along the deck are benches for hikers and bikers. Power is provided by a motor launch lashed to the side of the barge. That first trip, in July 1996, presented an empty landing on a chilly Sunday morning, and no one seemed certain that there would be a ferry at all. But after an anxious half hour, a few people with packs appeared, and shortly thereafter the ferry made its deliberate way toward our bank. When offered pay, the ferrymen refused with gruff good humor: “Today is the National Day of the River Fleet.” And to prove the point, they turned up the radio with rousing music of Russian riverboat chanteys. The ride was choppy, but it was an ideal way to see this northern river, cold and windswept like the landscape. On the opposite side the barge ramp clanked down, and vehicles plunged into the sandy bank, as if from an amphibious carrier. A rutted track led through flat, marshy fields with small villages, and finally connected with a graveled road to Solvychegodsk. 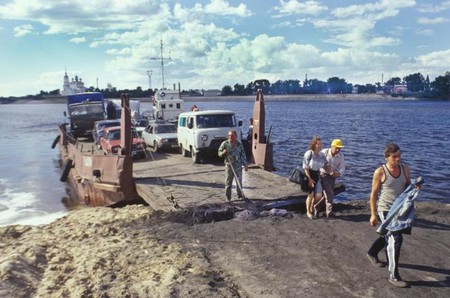 Entering Solvychegodsk, which has some four thousand souls, is another of those Russian experiences that transport you back to the nineteenth century. One-story dwellings, usually of wood, mingle with low brick structures of the town’s few Soviet-era enterprises and workshops. The first Russian settlements in the area probably arose in the fourteenth century with the support of medieval Russia’s mercantile power Novgorod, whose explorers and traders would have recognized the value of a site near the crossing of two major river routes: north to the White Sea and east to the Urals. The merchant dynasty of the Stroganovs did not arrive until the middle of the sixteenth century, and soon thereafter the town was founded. As new trading routes led to a decline in its significance in the eighteenth and nineteenth centuries, the town became a small resort, known for its mineral waters and springs.

At the beginning of this century there were at least twelve brick churches here, of which eight were destroyed in the Soviet period, and two others left in various states of damage. But the jewels in the crown, the two Stroganov “cathedrals,” still stand relatively unscathed. The earlier is a sixteenth-century cathedral dedicated to the Annunciation, and the other is an elaborately decorated seventeenth- century church dedicated to the Presentation of the Virgin. 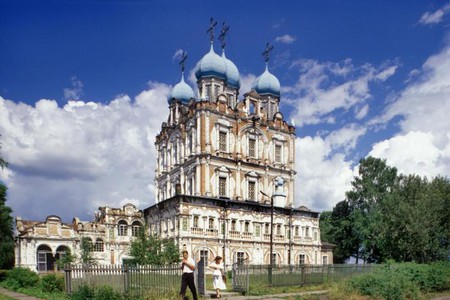 Why were such grand structures built in so remote a location? One answer lies not far from the Presentation Church, in a salt spring now covered with a small log tower, a replica of the earlier Stroganov stockade. The area is replete with such springs, as well as a small brackish river, the Usol, and a salt lake, the Solonikha. The production of salt is now taken for granted, but in the medieval era, it was one of the most valuable of commodities. In this part of the Russian North, an enormously profitable salt monopoly, derived from ample sources of brine, allowed the Stroganovs to create a private empire at Solvychegodsk. Although miserly in most respects, the Stroganovs spent immense sums on the arts and crafts in the North of Russia during the sixteenth and seventeenth centuries. The term “Stroganov style” defines elaborately ornamented forms in music, icon painting, and architecture, as well as in the applied arts—a style that appeared wherever the Stroganovs had major operations, from Solvychegodsk to Nizhny Novgorod, on the Volga River, to Perm in the Ural Mountains.

The most lavish example of Stroganov architecture is the main church of the former Monastery of the Presentation of the Virgin. During the winter, services in the Presentation Church are held only in the warmer, south gallery. In March 1998, however, Father Vladimir, the young priest of the parish, allowed me into the main sanctuary after noon services on a bright Sunday. The interior was intensely cold, but the sunlight streaming through the high south windows dramatically illuminated the iconostasis. I hurriedly fumbled with my cameras to take as many shots as possible (the priest himself wanted photographs of the interior), and within minutes I was perspiring, despite the cold. Rarely has a small parish received such lavish premises. 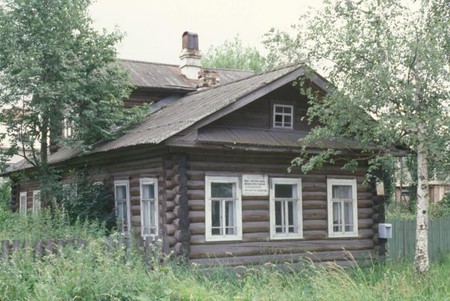