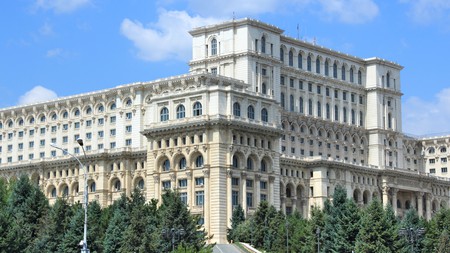 Palace of the Parliament of Romania | © tupungato / Getty Images

As any Romanian will eagerly explain, there’s much more to know about Romania than the legend of Dracula and Ceauşescu‘s legacy. Constantly featured among Europe’s best travel destinations, Romania has plenty to surprise those looking for an exciting, off-the-beaten-track destination. From natural wonders to achievements by some of its famous people, we’ve rounded up 12 surprising facts you didn’t know about Romania.

Europe’s best preserved delta can be found in Romania

Located in Eastern Romania, a four hour drive from the capital Bucharest, the Danube Delta is the second largest delta in Europe and the best preserved on the continent. With 300 species of birds and 160 species of fish, it is a true birdwatcher’s paradise and a dream destination for wildlife lovers. Remarkably, this is also the best place to spot some of Europe’s last wild horses. Also, the seafood and fish dishes served here are the best in the country.

Scărișoara Cave, located at an altitude of 1,165 meters (3,820 feet) in the picturesque Apuseni Mountains, shelters the Scărișoara Glacier. With a volume of 75,000 cubic meters (2,650,000 cubic feet), this 3,000-year-old natural wonder is Europe’s second largest underground glacier and one of the country’s major speleological sites. For maximum effect, visit the cave in summer to experience the sharp temperature drop, either as a sole objective by traveling 125 kilometers (80 miles) from Oradea, western Romania, or as part of a hike, in any season.

Romania has plenty of active volcanoes

Alright, they may be only six meters (19.6ft) tall, and they may not spit fire, but Romania’s mud volcanoes are nonetheless very photogenic. Visit at sunset, when the wet surfaces created by the fresh mix of mud, water and gases reflect the setting sun.

The 60-hectare (150-acre) botanical and geological reservation where they are located is unique in Europe, and is divided into two sections, Pâclele Mari and Pâclele Mici. To see the spectacular mud volcanoes you must travel to Berca, Buzău County, 22km (14mi) from the city of Buzău and 122km (75mi) from Romania’s capital, Bucharest. 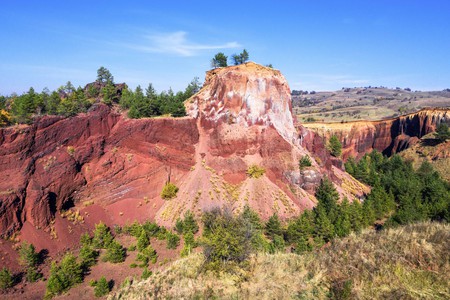 The former salt mine Salina Turda, which dates from the 17th century, is home to an underground amusement park nestled 120 meters (400 feet) down in its belly. The attractions include a bowling alley, an amphitheater that regularly hosts live concerts and a Ferris wheel. What’s more, the salt mine also hosts an underground salt lake that you can explore using paddle and rowing boats.

The best thing about visiting this particular amusement park? Spending time in a salt mine will give a boost to your lungs, alleviate any allergies and offers other amazing health benefits.

In Romania there’s one cemetery that makes light of death

Romania’s Merry Cemetery, located in Săpânța, Maramureş County, is the world’s most colorful graveyard. It started one day when a very talented local craftsman, Stan Ioan Pătraş, started using his creativity to make colorful wooden crosses which he painted with poems about the lives of his customers.

A walk in the Săpânța Merry Cemetery will delight you visually as well as challenge you to meditate on the transient nature of life. In particular, pay attention to the symbols hidden in the colorful palette. Green is used to mean life, yellow represents fertility, red signifies passion and black represents death.

While many perhaps expect Romanians – due to the country’s location in Eastern Europe – to speak a Slavic language, unlike their neighbours, they actually speak a Romance language.

Romanian is similar to French, Italian, Spanish and Portuguese, although in terms of vocabulary, it does include a lot of Slavic words. For instance, Romanians say da for ‘yes’. However, as far as grammar is concerned, Romanian is actually the closest language to Latin.

There are seven UNESCO World Heritage Sites in Romania

Romania is home to no less than seven World Heritage Sites. The Villages with Fortified Churches in Transylvania, the old center of the city of Sighișoara, the ruins of Sarmizegetusa Regia, the former Dacian capital in the Oraștie Mountains, the Horezu Monastery, the wooden churches of Maramureș, Moldavia’s painted churches, including Voroneț, and, for its tremendous diversity, the Danube Delta. 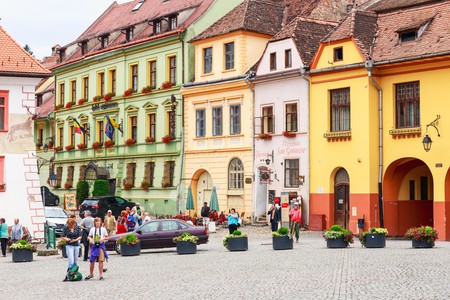 Dominating the skyline of Romania’s capital Bucharest, The Palace of Parliament is the heaviest and most expensive administrative building in the world. It is also the world’s second-largest, after the Pentagon. Designed by 28-year-old Anca Petrescu, the House of the People, as it was called during Romania’s Communist rule, was commissioned by the country’s former dictator, Nicolae Ceauşescu. Out of its 1,100 rooms, many disposed on its eight underground levels, only 400 are finished and used.

In 1884, Timișoara became the first city in Europe to introduce a lighting system for the entire city using electric street lamps. Two years earlier, the city’s contract with the Viennese company that provided the gas used for street lighting ended, and the costs spiked. Faced with the possibility of being left in the dark, the city decided to implement a revolutionary public lighting system, and so history was made.

Romania once had Europe’s longest bridge

At 4,087.95m (13,411.9ft), when completed in 1895, the Anghel Saligny Bridge became the longest in Europe and the second-longest in the world. Stretching over the Danube River, the railway bridge, a national monument, is adorned by two statues of soldiers that were cast in bronze in Lyon. To prove his trust in the newly-built bridge, on inauguration day Romanian architect Anghel Saligny stood under the bridge in a boat, together with his engineers, while 15 locomotives raced across whistling at 80 kilometers per hour (50 miles per hour).

Petrache Poenaru, a mathematician, engineer and inventor who studied in Vienna and Paris, patented the fountain pen. As he was based in France at the time, the patent was issued by the French government on 25 May 1827. In recognition for his invention, Poenaru was honoured with a station on Bucharest’s yellow metro line (M1).

Bucharest has a replica of Paris’ Arc de Triomphe

One of Bucharest’s symbols is the Arch of Triumph, which was built in 1936 to celebrate the country’s participation in WWI. Standing at 27m (88ft), the arch was modelled on the Arc de Triomphe de l’Étoile on Paris’s Champs-Élysées. Covered in Rușchița marble, Romania’s best, it features sculptures by the finest artists of the interwar period. 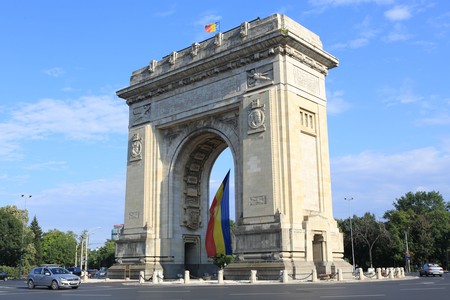