Most Beautiful Churches In Europe 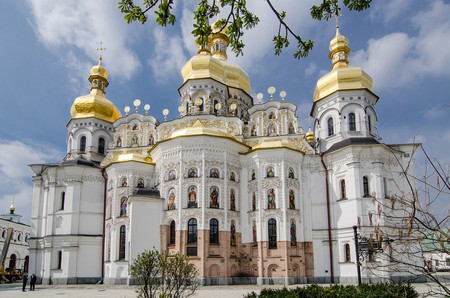 From the soaring majesty of Rome’s basilicas to the curious creativity of Gaudi and the ancient timber rises of the Viking stave chapels, these are the 12 most beautiful churches in Europe. 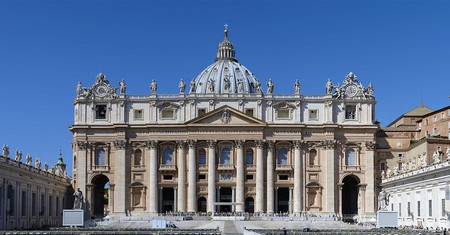 No self-respecting line-up of Europe’s finest churches could possibly omit St Peter’s Basilica in Rome. This is a soaring, colossal masterpiece of Renaissance facades and baroque decorations that was touched by some of the most totemic figures in the canon of European classical art: Michelangelo; Bernini; Carlo Maderno. No matter where you are in this mighty piece of architecture – whether on the tips of the dome soaring high above the Eternal City, or in the crypt of St. Peter himself -there’s always some priceless cultural wonder to behold. 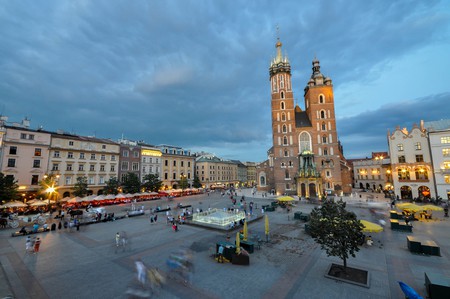 Fronted by two colossal towers and imbued with one seriously fascinating triptych by the German woodworker Veit Stoss is St. Mary’s Basilica. It can be found looming high above the cobblestone streets of Krakow’s old town centre. It’s gilded with two magnificent gothic spires and glows red as the sun sets over the bustling main square. What’s more, at the turn of every hour, the basilica comes alive with the sounds of a trumpet: the iconic hejnał mariacki that honors the city’s medieval defense against the Mongol Hordes. 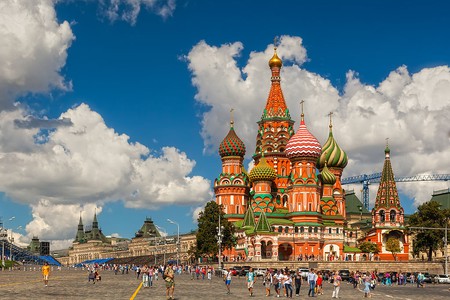 St. Basil’s Cathedral adorns the edge of Moscow’s iconic Red Square. It is famed for its glorious set of onion domes and technicolor rooftops, all of which were built to resemble the flickering flames of a bonfire. The building itself was commissioned way back in the mid-16th century, intended as a trophy piece of Ivan the Terrible following successful conquests against the Khanates of middle Asia. Today, it’s a veritable symbol of the Russian state, though curiously unlike any other piece of religious architecture found anywhere else in the country, or in the former USSR for that matter. 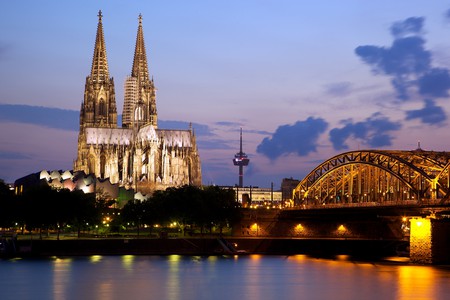 True to its original purpose, the Kölner Dom still comes in as one of the most massive churches in all of Christendom. It soars a whopping 157 meters above the central hub of Cologne, dominating the skyline of the Rhine Valley for miles around. It’s also the most visited attraction in all of Germany, pulling in an estimated 20,000 people each day. Its visitors are all eager to spy out those majestic gothic facades and monstrous flying buttresses. Inside, revered relics like the sparkling Shrine of the Three Kings and the Crucifix of Bishop Gero from the 10th century continue the brilliance.

Glinting gold and brilliant white against the Ukrainian sky, the gilded spires of the UNESCO-inscribed Pechersk Lavra have surely got to be among the most beautiful on the planet — let alone Europe. What’s more, the whole story of this Eastern Orthodox wonder is enchanting from the get go. It started life in the 11th century as a humble cave monastery in the tradition of the Kievan Rus. Then, it slowly developed into the majestic site it is today, complete with the colonnades of the Great Lavra Belltower and the shimmering tips of the Cathedral of the Dormition. 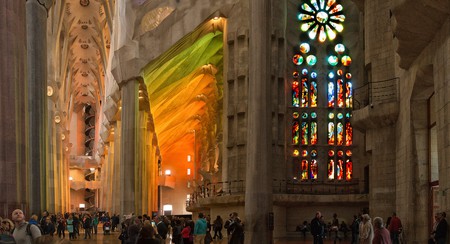 Yet to be finished, the Sagrada Familia already flaunts its Dadaist panache, UNESCO title and otherworldly majesty better than any other building in Barcelona. It soars more than 160 meters above the plains of the Costa Brava. It’s such a veritable symphony of styles that visitors to its colossal interior are kept busy as soon as they enter. In nooks and crannies, macabre gargoyles peer out devilishly, while monoliths of turtles in their carapaces cling to the steles. A multi-colored mishmash of towering tree-like columns dominates inside. Art Nouveau, gothic, surrealist, romantic – it has it all. 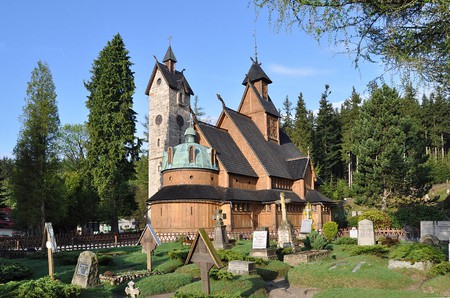 A Scandinavian émigré in the depths of Southern Poland, this fascinating little church was actually transferred bit by bit from Norwegian Oppland in 1842. However, it originally dates from the 12th century, and is one of the few remaining examples of the stave school of church building which was particularly popular in Nordic countries at the time. Today, it can be found shrouded by the rising hills and fir forests of the Karkonosze Mountains, or dressed in a dusting of Polish snow. However, it still bears original inscriptions and runes of the Viking age. 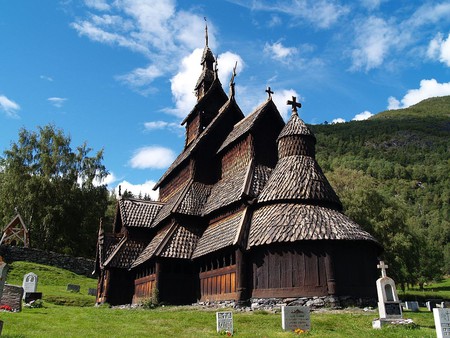 The Borgund Stave Church sits nestled between the wild valleys of Lærdal in western Norway. It touts the trademark shingle roof, a deep and brooding dark-wood exterior and the ubiquitous sets of mysterious Nordic runes from the 12th century. Inside, the church is a rustic mix of exposed beams and carved woodwork, where it’s easy to imagine Vikings meeting and praying in millennia gone by. 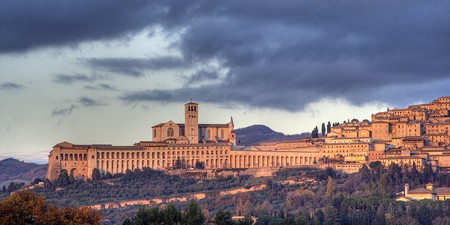 Who could ever contest the majestic beauty of the Basilica of San Francesco d’Assisi; shimmering in pearly white over the plains of Perugia and adorned with a UNESCO tag? With those exquisite Romanesque cross-vaults and Renaissance porticoes mingling seamlessly with the Gothic apses and carved window pieces of the Upper Church, it’s quite a sight to see. Inside, the glory continues, with frescos by the likes of Giotto and Cimabue fading ethereally on the walls. 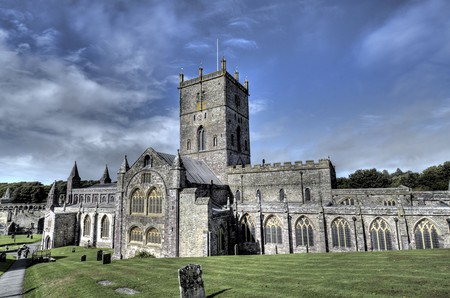 Located right on the cusp of West Wales, St David’s Cathedral stands watch over the seal-dotted waters of St Brides Bay and the rugged coastal stretches of Ramsey Island. Since its foundation in the seventh century it has been harried by Vikings, patronized by William the Conqueror and decreed by Pope Calixtus II (who equated a pilgrimage to St David’s as half of one to Rome). Today, it rises in a medley of gothic and medieval styles, and is shrouded in all the legends and myths you’d expect of a 1,300-year-old building out of Wales—featuring Gerald, Merlin et al. 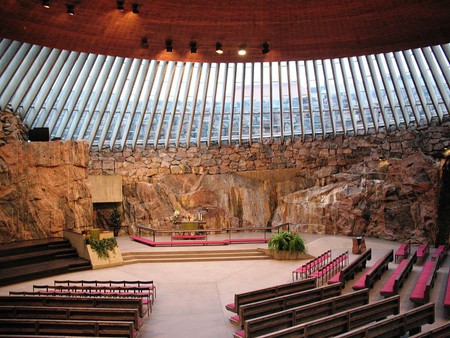 The veritable magnum opus of revered Finnish architect brothers Tuomo and Timo Suomalainen, this startling Lutheran church cuts its way directly into the rocks of Töölö in the heart of bustling Helsinki. It’s famed for its ambitious, avant-garde design and echoing acoustics. It touts unquestionably one of the most beautiful interiors of any modern church in Europe, complete with an arching oval dome, glistening inlays of granite rock, trickling streams of water, and an altarpiece crucifix and font crafted by the artist, Kauko Moisio. 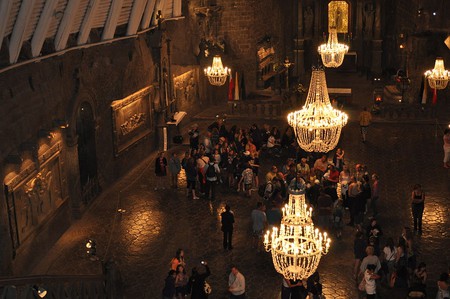 The Chapel of St. Kinga (Wieliczka Salt Mine), Wieliczka, Poland

Hewn deep into the Polish ground just south of Krakow, the winding tunnels and echoing chambers of the Wieliczka Salt Mine (a UNESCO World Heritage Site no less) have been striking awe into visitors for centuries. Right at its heart, more than 100 meters below the surface, lies the magnificent Chapel of St. Kinga. This is a scintillating, shimmering and cavernous chamber where everything – from the dangling chandeliers to the hexagonal floor tiles and replica friezes of Da Vinci’s Last Supper – are carved from the subterranean salt rock.