Through a combination of investigative journalism and the graphic novel form, Maltese-born Joe Sacco has been creating works of comic non-fiction for well over two decades, illustrating conflict, war and human atrocity through the medium of graphic art. Following our article exploring Joe Sacco’s individual works, from The Fixer to Footnotes in Gaza, we now take a look at the career, life and underlying philosophy of the self-branded comics journalist. 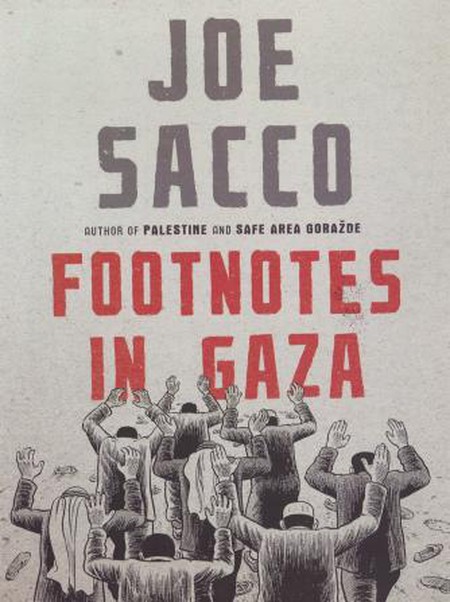 Utter the words ‘comic book’ to almost anyone and you can all but guarantee what connotations will surface; Marvel and DC, bright, gaudy colours, and in recent years, huge blockbuster superhero movies. It is unlikely that many will mention gritty investigative journalism probing questions of identity in the world’s most notorious conflict zones. This, however, is Joe Sacco’s area of expertise, and has been for over twenty years. For Sacco is widely considered to be the pioneer of an alternative type of graphic art, that of the unlikely, but successful, paring of conflict reportage and comics, or Comics Journalism to those in the know.

Born in Malta in 1960, Sacco spent his childhood predominantly in Melbourne, Australia, where he moved, with his family, at the age of one. Uprooting again in 1972, this time to America, Sacco has spent the rest of his life living in and around Portland, earning a BA in Journalism from the University of Oregon. Armed with this journalistic background and a passion for comic books Sacco travelled to the Palestinian Territories in the winter of 1991-2, spending two months gathering interviews, stories and sketches which, on his return to the States, became what is now considered to be his seminal work, the graphic series Palestine. The series set the scene for the structure of Sacco’s subsequent works, which are constructed in an almost travel diary-like format. The narratives follow Sacco, immortalized as an amusing caricature, as he attempts to build up a concept of the political and social situation that he has placed himself in, be it the first Palestinian intifada in Palestine, the Bosnian War in Safe Area Gorazde or the Suez Crisis in Footnotes in Gaza.

Continuing from a comics tradition that produced works such as Art Spiegelman’s Maus, (probably the most renowned graphic narrative to date, based on the testimony of Spiegelman’s father, an Auschwitz survivor) Sacco’s work is firmly set in reality. By entering conflict zones and interacting with the ordinary people who live there, Sacco gathers first-hand testimonies, which he then breaks down into a series of individual drawings that make up the frames of his narrative. By using himself as a character he allows his readers to access these testimonies through his own experiences; in almost all cases he will first depict himself meeting and talking to the person testifying before then going on to recreate their words through his drawings.

The effect of this predominance of testimony, accessed by the reader through Sacco, is twofold. Firstly he attempts to project a larger picture of his interviewee’s personal identities, transcending the singular representations that limit people, nations and cultures to constructed stereotypes. He strives to build up a complex and layered perspective of the reality of life in these often controversial places, a reality that is a confronting juxtaposition of death and humor, war and normality. Secondly, by using himself as a vessel for understanding, he encourages his majority Western audience to critique themselves and the way they approach ideas of identity. By highlighting their own prejudices, he motivates them to rethink not only the way in which they interact with representations of others, but also to think about the source of their prejudices, the cultural environments that allow these singular stereotypical representations to emerge.

‘When you depict yourself you are able to have a conversation with the reader about your prejudices and their prejudices and that’s why I think the notion of objectivity is ridiculous, especially a Western reporter going to let’s say an Islamic culture.’

What is so appealing about Sacco’s work is the honesty with which he reports. In creating these lived realities he does not leave out the grizzly details of the often horrendous things his subjects testify to. By the same token, however, he also does not martyr his subjects; for him, they are the underdogs, the oppressed and the voiceless, but they are not saints, and he refuses to show them in that way. What is left is a very raw, very human representation and one which is as enlightening as it is engaging.

His new publication, however, has taken the artist in a somewhat different direction. Twenty-four feet long and presented folded up, much like an accordion, The Great War is less of a book, more of a single panoramic cartoon, depicting 1 July 1916, the first day of the infamous Battle of the Somme. Inspired by photographs, witness accounts and fiction, the strip tells a narrative of war, in much the same way as the Bayeux Tapestry, of the preparation to the outcome of a single bloody day in history. Taking on a historical project, as opposed to his previous ventures in contemporary world issues, was an active decision for Sacco, a step away from journalism in its purest form.

Regardless of this, the influence of his time working in conflict zones are clear throughout The Great War. The themes and visual motifs that occur throughout the work are similar to those found in many of his previous projects, and the way in which Sacco strives to create a tableau of individuals, as opposed to a homogenous sea of soldiers, is yet another example of his talent of humanizing atrocities.

The way in which the graphic form is able to break down complex issues and present them in a means that is more accessible, and importantly more enjoyable, to a wider audience makes it arguably one of the most powerful, and almost untapped, resources of political representation there are. That Sacco has been at the forefront of this medium for over two decades is a testament to the author’s skill as both an artist and narrator, and if nothing else proves that there is much, much more to comic books than superheroes.