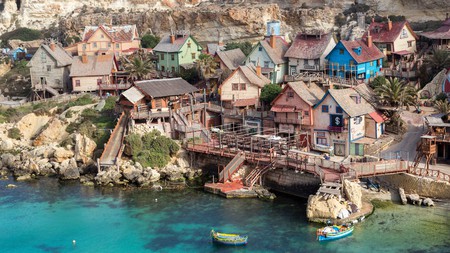 When a 1980s live-action musical version of Popeye failed to take off at the box office, few critics could have imagined that more than 40 years later people would still be talking about the film. If you find yourself in Malta, though, it’s impossible to spend much time on the island before the subject of everyone’s favourite spinach-loving sailor pops up.

The exact timelines are a little murky, but what we do know is that, after a lengthy production period, a vast wooden film set was built by Hollywood studio Paramount to accommodate their big-budget Popeye movie. Malta’s Anchor Bay, a few miles from the village of Mellieħa, was transformed into Sweethaven, the fictional coastal setting of the movie. It’s not uncommon for large sets such as this to be erected for the purposes of a film, but what is rare is for the production crew to leave without taking their work with them. 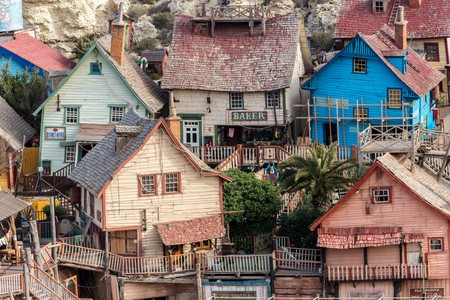 The movie was one of the first big screen roles for Robin Williams, who took on the titular character, with Olive Oyl played by Shelley Duvall, taking on her first role after the horrors of working with Stanley Kubrick on The Shining (1980).

Watching Popeye today feels like tuning into an oddity that deserves the mixed reaction it gained on release. The film was over budget and behind schedule, which reportedly led to the cast and crew leaving in a hurry once they wrapped. This also explains why the set was left behind as a relic to a troubled movie. 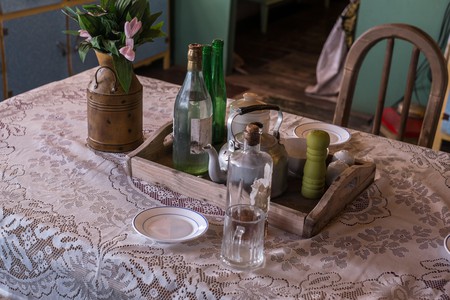 Entrepreneurial locals, however, were quick to notice the potential of a working village built in the style of a film set. The village is great to walk around, but arguably the biggest selling point is the view of the painted house fronts and deep blue waters of the surrounding bay that you see as you drive up to Popeye Village. Ask the driver to drop you off at the viewing point rather than the entrance gates, so you can get the full measure of the absurdity of the place. Buses also run here, and you can use the excellent public transport network to easily get around the island. 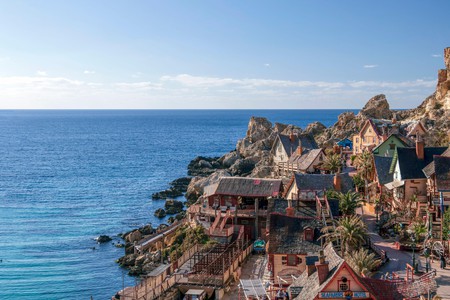 There are numerous props from the movie littered around the village. Boats that don’t look like they would last more than a few minutes out on the ocean waves instead make for a colourful and vibrant talking point as you enter. To capitalise on the links to the film, there is a 40-seat cinema in the heart of Popeye Village that plays clips from the movie, as well as behind-the-scenes footage of the building of the set. What we gleaned was that it took an international construction crew of 165 people more than seven months to complete the 19 buildings used in the film. The wood used for construction was imported from the Netherlands, and shingles used for the roofs were flown in from Canada. 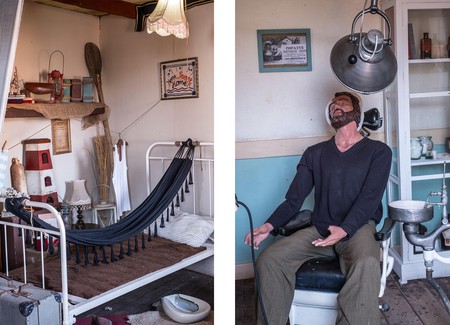 A breakwater was constructed at the mouth of the bay to protect the set, and the calm waters today are used to house a series of inflatables that form a water park feature. Weather permitting, you can also take a boat trip around Anchor Bay to get a completely different perspective on the village.

Actors dressed as characters from the movie can be found wandering around the attraction, and there are food stands and small rides for children, too. Popeye Village, which is referred to locally as Sweethaven, has become a popular venue in Malta, used for corporate events and private parties. You can even arrange to have your wedding here, perfect for anyone keen on having a spinach-themed ceremony! 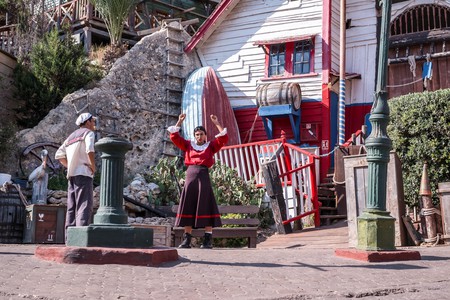 This really is a unique place for film fans to visit. There aren’t many purpose-built sets you can actually visit anywhere in the world, and none as well-preserved as Sweethaven spring to mind. Malta itself has gone on to become a popular film location for film and TV, but it’s hard to imagine any blockbuster of recent times leaving as much of a lasting mark on the country as this. 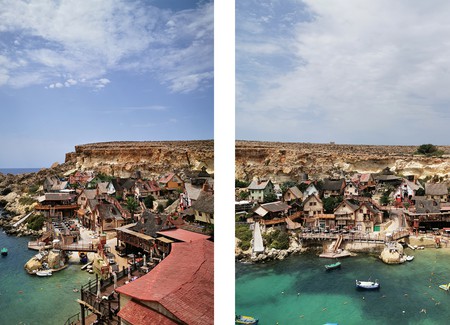 Popeye Village is rare, as a film set that you can still visit | | © Cassam Looch

For more information and details about the film set that found a new lease of life as a tourist attraction, visit the Popeye Village website.