The 15 Best Things To Do in Trastevere, Rome 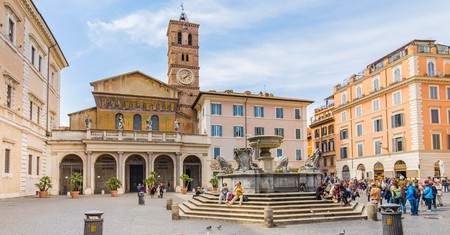 Wander around a Medieval church, admire 19th-century watercolours and dine on first-class pizza. There are plenty of things to do in Trastevere.

Trastevere, sitting just down the Tiber from the Vatican, is a city within a city; an enclave with its own identity where the locals have generally greeted creeping commercialisation and ongoing attempts at gentrification with a wonderfully Roman disdain, flatly refusing to let such shenanigans impede on the richness of their daily lives.

A strong sense of civic pride resides among the Medieval maze of piazzas and cobbled vicoli (alleyways). An old friend of mine, native born to the area, has even turned his back on following the capital’s beloved AS Roma football club and instead spends his weekends rooting for the Trastevere Calcio team (you can find them, should you look hard enough, down in the murky depths of the Italian game’s fourth tier).

Not that this is an unwelcoming place. Far from it. Joining in the fun, becoming a part of Trastevere’s great bustling backdrop is easy to do, whether you’re simply sitting on the steps of the Piazza Trilussa or ordering a coffee at the counter of one of the area’s many bars. 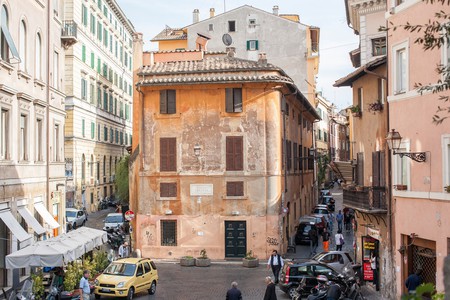 The recent restoration of one of Rome’s oldest churches has given new life to the 12th-century Pietro Cavallini mosaics (including his celebrated Vita della Vergine) and frescoes and marbles of more recent vintage. Domenichino’s gloriously Baroque 16th-century octagonal gold ceiling also houses one of his greatest paintings, L’Assunzione della Vergine (1616-1617). Dating back to the third century at least, the church has a decent claim to being the first official Christian place of worship in the city. The Basilica di Santa Maria is open daily from 7.30am-9pm, but visitors are not allowed during mass (you can call the church for service schedules). 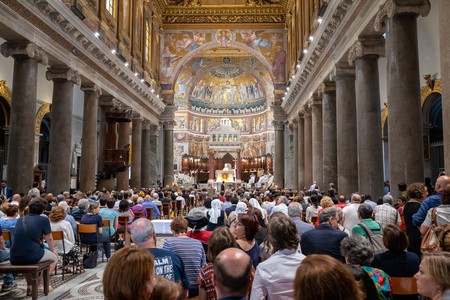 La Chiesa di Santa Cecilian is a fifth-century church honouring the martyred patron saint of music, who lived on this site and whose body was exhumed in 1599 and sculpted in a strikingly naturalistic pose by Stefano Maderno in his marble masterwork Santa Cecilia (1600), kept here in a glass case. Pietro Cavallini’s Giudizio Universale (circa 1300) frescoes are not to be missed, with one surviving segment taking up the church’s west wall. The Cosmatesque-styled crypt contains St Cecilia’s remains. 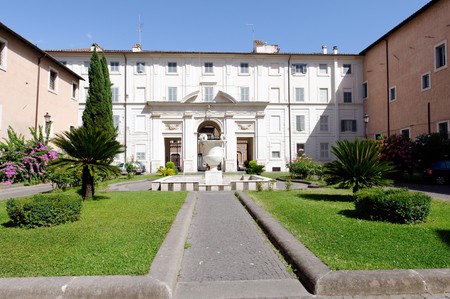 Orto Botanico and the Gianicolo

The Orto Botanico or, to give it its full name, the Orto Botanico dell’Università di Roma “La Sapienza” (everyone knows it as the Botanical Garden), is a prime spot for cooling off among the bamboo groves, Japanese gardens, medicinal plants and greenhouses. In times past, the Orto Botanico was the private garden of the nearby Palazzo Corsini, where you can see works by Caravaggio, Gentileschi and Peter Paul Rubens. Later, head along up the pathway to the top of the Gianicolo hill, with its Baroque fountain, Garibaldi monument, daily canon fire (at noon) and glorious views of the long and winding Tiber and out across the capital. 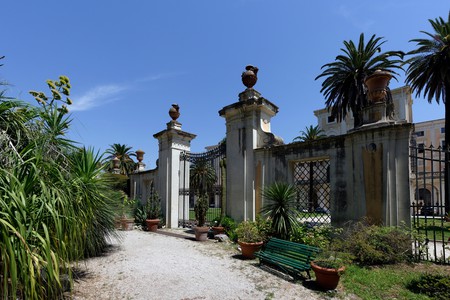 Linked across the river by two bridges, Sistio and Fabricio, and claimed as Trasteverino land, Tiber’s only island is frequently used for events and festivals, usually involving food, but even if there’s absolutely nothing going on (unlikely), it’s still well worth a visit. Held every summer, the open-air Isola del Cinema is one of Rome’s great celebrations of film, with neorealismo black-and-white classics projected on to buildings, and the city’s nocturnal buzz adding an extra layer of soundtrack (not to worry if you don’t speak a word of Italian, just let the experience wash over you). See isoladelcinema.com for programme details. 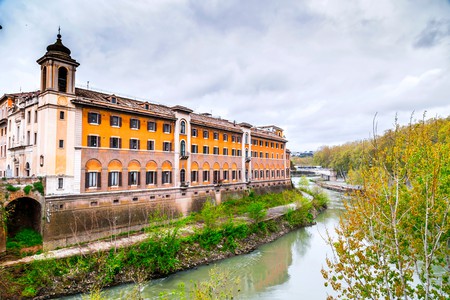 This museum showcases Roman art from the 18th to the first half of the 20th century, with a permanent record including works by Ettore Roesler Franz, one of the capital’s great chroniclers, whose series of Vanishing Rome watercolours documented the changing city in the late 1800s. A series of temporary exhibits include photography, reportage and video.

Should you ever need to reorientate yourself, you can always head back to this busy square just over the Ponte Sisto and work out your next move. You won’t be alone. People meet up and mingle here, sipping drinks from nearby bars and arranging plans for the evening (which sometimes involve staying right where they are). The piazza takes its name from the Roman poet Trilussa and his statue stands in front of the large travertine fountain at its centre. 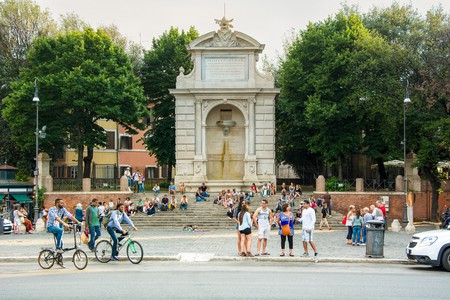 Piazza Trilussa is named after a Roman poet | © rarrarorro / Shutterstock

The best food and drink in Trastevere

If you want a proper introduction to the joys of classic Roman cooking sat amid well-fed, fusspot locals, this family-run charmer is the place (and you’ll absolutely need to book ahead). Roast suckling pig is one of the signatures, but there’s lighter fare on offer, with the cacio e pepe (cheese and pepper pasta) a big favourite. And do your darndest to leave room for dessert.

For a thin-crusted Roman take on the Neapolitan dough discs, Marmi (known locally as L’Obitorio – The Morgue – for its functional, slab-like table settings) serves up salsiccia and bresaola varieties, while there are also crostini and fillets of baccala. The fritti starters, including deep-fried olives, are very popular. Be prepared to wait at peak times, but there’s enough theatre on show among the harassed waiting staff to ensure the minutes tick by at a decent rate. The restaurant is closed on Wednesdays.

Much-loved watering hole and now something of an institution, Almalu Trastevere serves cocktails, shots and other boozy delights to an international crowd (this is the perfect place to make new friends from all the four corners), all looked after by a mini-squadron of mixologists watched over by patron Alessio. Always a fun atmosphere, but earlier in the evening it can feel a little calmer – good news for those of us belonging to a slightly older demographic that likes to linger a little longer over our drinks.

Catering to a more arty, upmarket mob than Almalu (people will stare long and hard at your choice of shoes here, rather than tread on them on their way to ordering another round of shots), with contemporary art adorning the walls and views over the river. Freni e Frizioni has a pleasingly early ’80s Downtown New York thing going on, echoed in the names of its cocktails: CBGB, Iggy and Devo are all available, with a Modern Lovers a particular brunchtime favourite, created from gin, Polugar, fresh basil and tomato. A few of those and you’ll soon be singing a few verses of ‘Roadrunner’, if not swinging off the chandeliers hanging from the ceiling.

Because sometimes (often times?) only a beer will do. Part of the new breed of bars and eateries that are springing up around the area, catering for students from the nearby American University and a younger travelling crowd, Birrifugio is a friendly antica birreria (ancient brewery) that also does an impressive line in whiskies and serves up some hearty steaming bowls of pasta. It’s a great place to watch Roma games, too.

Part bookstore, part piano bar, part arts centre, part chocolatier, Rivendita is all this and more: a marvellously offbeat place to sip an absinthe cream in a chocolate cup and enjoy the bookish ambience or, as the clock edges closer to midnight, slam down some choccy shots and bounce around to cheesy Italian pop. 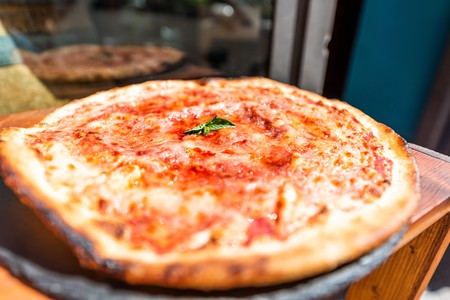 This engagingly eccentric shop sells handmade timepieces, sundials and hourglasses and feels like the setting for a Tim Burton-type fairytale. If your budget (or luggage allowance) doesn’t quite stretch to an astrological globe, stock up on some leather-bound Medieval notebooks or some stamps for sealing wax to add a dash of style next time you send out a round of party invites (or maybe a tax return).

Antica Caciara is a fabled old deli where you can stock up on regional and national favourites like finocchiona salami, pecorino romano cheese, burata (you will, it’s safe to say, find lots of cheese here…), breads and wine. The staff are sweethearts and, while it may veer a tad towards the tourist trap, some places are popular for a good reason.

Taking place every Sunday (from 7am to 2pm), this is one of the largest markets of its kind in Europe and sells pretty much anything you could want, including vintage clothing, antiques and other retro goodies. An awful lot of junk too, of course, but that’s all part of the fun. Be sure to bring some cash with you: stallholders regard chip-and-pin swipe card technology as the work of the devil. 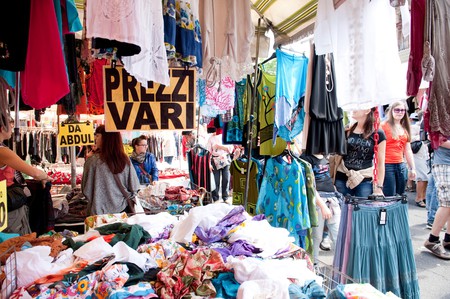 Shopping at the Porta Portese markets, in the Trastevere district of Rome, Italy | © Susan Wright / Alamy Stock Photo
Give us feedback