The 10 Best Restaurants In Syracuse, Sicily

The 10 Best Restaurants In Syracuse, Sicily

Pizza | © Shaiith / Shutterstock
A bustling city of 125,000 people, Syracuse was once an ancient, thriving metropolis on the east coast of Sicily. Sicilian food comes with the strong flavours of the southern Mediterranean, introduced by the ancient Greeks, and the sophistication of the Arabs who ruled Sicily in the 10th century. Through a tribe of smart new restaurants, Syracuse has been revived. Discover 10 of the best here.

The ideal location for a romantic dinner in the Dammusi inside, outside in the Duomo square, or upstairs on the floor of Palazzo Borgia del Casale, Regina Lucia offers excellent fresh fish. Elegantly contemporary, this is the place to go for dishes like potato gnocchi in a spicy seafood sauce with tenerumi, with a special attention to presentation. Use this dining opportunity to take in the Piazza Duomo, which regular visitor and Crabtree & Evelyn founder Sue Townsend calls the ‘essence of Sicily’.
Address: Regina Lucia, Piazza Duomo 6, Syracuse, Sicily, Italy, +39 093 122 509 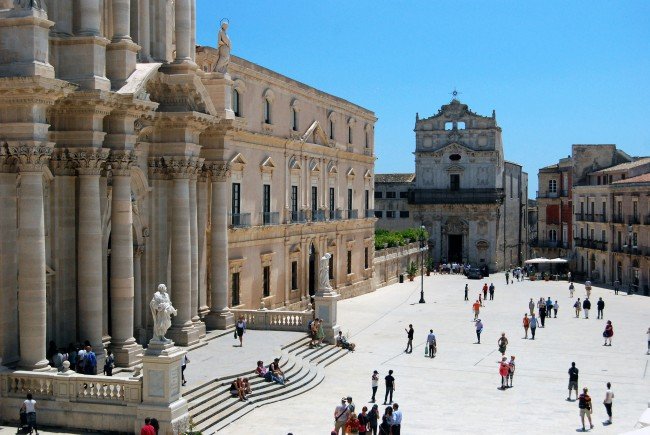 
Retroscena Run by local Fabio and his Greek wife, Retroscena puts a contemporary twist on traditional Sicilian classics. Retroscena is located in the Jewish quarter, a small restaurant nestled around a little inner courtyard. Reserve a table in advance to enjoy the modern, Greek-inspired interior and unique interpretation of local dishes.
Address: Retroscena, Via della Maestranza 106, Syracuse, Sicily, Italy, +39 0931 185 4278

Basirico is housed in a medieval palace, which was built around 1300. Despite its historical roots, the atmosphere is light and open with large tables and comfortable spaces. Downtown near the Duomo, but still secluded, Basirico is influenced by the region and its history. Pay homage to the local color of this restaurant and try a fine regional red wine, Cantine Guilo’s Drus is to die for.
Address: Basirico, Via Amalfitania 60, Syracuse, Sicily, Italy. +39 393 204 2023

Ristorante Dioniso If you’re looking for an excellent gastronomic experience, head to Ristorante Dioniso, near Porta Marina. The first thing that will strike you about this restaurant is its lively vibe; the aura is eclectic and chaotic. In contrast, the owner, Alfio, maintains a short menu to ensure quality and freshness. Passionate about food and wine, Alfio and his restaurant turn a simple dish into a meal to remember.
Address: Ristorante Dioniso, Via Claudio Maria Arezzo 33, Syracuse, Sicily, Italy, +39 0931 24679


Oinos di Ivo Vatti This restaurant represents the modern face of Syracuse, brought to you by a young Milanese chef. The dining rooms are simple but alluring, a delicate combination of class and avant garde style. A wine-oriented restaurant, Oinos specializes in dishes that spotlight in-season ingredients. Surrender to the antipasto, a fine wine, and an impressive meal.
Address: Oinos di Ivo Vatti, Via della Guidecca 69, Syracuse, Sicily, Italy, +39 0931 464 900


Taverna Sveva Taverna Sveva is a casual tavern, tucked away on the streets behind the Castella Maniace. Far enough away from the tourist areas, this small restaurant offers traditional Sicilian dishes, both land-based and seafood, served on hand-painted ceramic ware. On a warm evening, the outdoor terrace on the cobbled square in front of Syracuse’s 11th century castle is the place to be.
Address: Taverna Sveva, Piazza Federico di Svevia 1, Syracuse, Sicily, Italy, +39 0931 24663


Don Camillo A small, family-run restaurant, Don Camillo was born in 1985, the brainchild of Camillo and John Guarneri. Don Camillo has become an institution, known for its quality. The rooms are made from the remains of a church that collapsed in the 1693 earthquake, and the medieval structure, lined with wine bottles and images of old Siracusa, is filled with locals. With a wine cellar containing over 800 types of regional, national and international wines, make sure to browse their award-winning drinks menu.
Address: Don Camillo, Via delle Maestranze 96, Syracuse, Sicily, Italy, +39 0931 67133 Wine Cellar| © xlibber /Flickr

Housed in a vaguely rustic, historic building in Ortigia near the Arethusa fountain, Trattoria La Foglia is half Edwardian country house, half bohemian chic. Named for its decorative motif, The Leaf was a dream realized in 1983 by Nicoletta and her husband, Beppe. Serving a number of vegetarian dishes, as well as fantastic seafood, many of the recipes have been harvested from local traditions, vintage cookbooks, and family memories.
Address: Trattoria La Foglia, Via Capodica 29, Syracuse, Sicily, Italy, +39 093166233

Il Veliero Il Veliero is the restaurant where local patriarchs treat their families to a meal. The atmosphere is plain and rustic, and lets the food do the talking. When you’re looking for a good fish restaurant in Ortigia, Il Veliero is the place to go for the freshest catches of the day and some seriously unusual options gracing the daily specials menu. What’s more, the location at the entrance of the Syracuse historic town is perfect, with a classic Latin ambience seeping in from the side street out front.
Address: Il Veliero, Via Savoia 6, Syracuse, Sicily, Italy, +39 0931 465 887