10 Steps That Built Modern Milan That You Need To Know 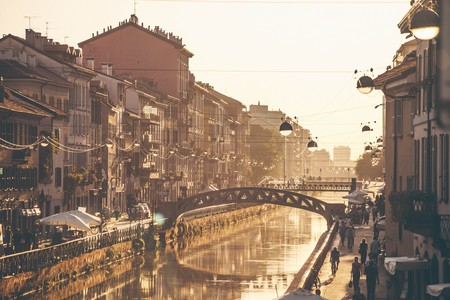 It’s the glamorous, modern fashion capital of Italy and an economic powerhouse. But there is so much more Milan than stockbrokers and stilettos. From its pre-Christian foundations to countless invasions, this fashion-forward city is ever-evolving. Here, Culture Trip uncovers 10 of the important historical events that shaped Milan.

The ancient Roman conquering of Milan

Milan was originally founded as Mediolanum around 600BCE by the Insubri Celts, who were then overthrown by the Romans in 222BCE. Its position in the north of the empire, as the gateway to the Italian peninsula, made Milan an important strategic stronghold for Caesar’s military operations from 58BCE to 50BCE. The city would go on to become an important trading route in Europe, helping to establish it as the economic capital it is today.

Invasions by the Goths, the Huns and others

Sitting in such a uniquely strategic position meant Milan caught the eye of many of the invading forces of Europe and Asia. Back in 400BCE, the Visigoths (the western tribes of Germanic nomadic peoples known collectively as the Goths) invaded. Then, in 452BCE, the infamous Attila the Hun had his turn and ransacked the city. It was subsequently attacked by the Ostrogoths, more Germanic tribes, and Charlemagne and the Franks. Everybody who wanted a piece of this great city left their mark.

The Patron Saint of Milan

Aurelius Ambrosius, or Saint Ambrose, was a governor of the Liguria and Emilia regions, headquartered in Milan. He was made bishop of the city by popular vote in 374BCE, after the death of Bishop Auxentius. Having attended the church to help prevent an uproar, the crowd began to chant, “Ambrose, bishop!” and demanded his appointment to the role. Ambrose was well known for his charitable giving to the poor, his stance against Arianism and his influence on Augustine of Hippo. He was later named the Patron Saint of Milan and is now commemorated each year by the Milanese on December 7 for City Day.

The Duomo and famous Navigli District are built

Perhaps Milan’s most significant and well-recognised attraction, the Duomo, was commissioned in the 1300s. Taking more than 600 years to build, it is Italy’s second-largest cathedral and demonstrates the strong religious roots of the city. However, the project had far-reaching implications. Many of the now-famous canals were built specifically to transport materials and are also now among the city’s most visited attractions. Countless bars and restaurants now sit alongside the canal network, establishing the Navigli (naviglio being Italian for canal) District as the culinary and cultural hotspot it is today, where you can enjoy a traditional aperitivo (pre-meal drink).

The modernisation of Milan begins

The city of Milan underwent significant changes throughout the middle ages, passing between invading rulers and becoming the capital of northern Italy in the process. In 1447 it was named the Ambrosian Republic. After the death of the ruling leader, Filippo Maria Visconti, Francesco Sforza conquered the city and the House of Sforza was established. Sforza was responsible for modernising medieval Milan, making his moderate court the centre of Renaissance philosophy. Many of the buildings constructed during this time still stand, including the impressive (and now much-restored) Sforzesco Castle located within Parco Sempione.

Milan becomes part of the Kingdom of Italy

After many struggles of power and shifting rule between the French, Spanish and Austrians until the late 19th century, Milan would finally become a part of the Kingdom of Italy. The unification of Italy (1815-1871) saw Florence become the capital, and subsequently Rome. However, Milan was always – and is still – considered the financial capital of the country. It is now home to the Borsa Italiana, Italy’s only stock exchange.

The rise and demise of fascism

In 1919, Benito Mussolini, a WWI veteran and socialist newspaper publisher, broke with the Italian socialists to form the Fascist Party (or Fasci di Combattimento, meaning “fighting bands”). This extreme right-wing political organisation would go on to start a reign of terror and intimidation against its left-wing counterparts, promoting Italian nationalism. Hitler’s Nazi Revolution was modelled on Mussolini’s Fascist Party ideals, and once the Nazi Party rose to power, Mussolini joined forces with Nazi Germany and their devastating regime of genocide. With the collapse of Nazi Germany and Italy’s surrender to the Allies, Mussolini was executed. His body and that of his mistress, Clara Petacci, were hanged by the feet in a public square for all to see. What followed was a strong movement in Milan against fascism and the royal family members who supported it.

In 1946, King Victor Emmanuel III formally abdicated, and his son, Umberto II held a brief reign. Then, in the same year, a referendum was held, in which 54 percent of the population voted in favour of a republic. This saw the whole of Italy, including Milan, adopt a system of civil and political rights, an independent judiciary, an anti-fascist constitution and constitutional court. All members of the ruling family were exiled due to their support of Mussolini and the Nazi regime. This ruling was overturned in the early 2000s, but still symbolises a strong will of the Milanese people to move away from this dark past.

In the post-war years, immigration to Milan skyrocketed, with many southern and rural Italians making their way to the economic hub in search of work. This influx of workers saw war-destroyed factories rebuilt and the economic power of the city reinforced. High-rises were constructed to accommodate the growing population and a new financial district – Porta Nuova – was developed. Porta Nuova is a popular Milanese district for both the financial workers of the city and the tourists who come for its trendy cafes, restaurants and boutique hotels.

During the fascist era, the artistic and architectural styles of the city developed and matured. Despite the disruptions of the first and second world wars, the region remained an important trading route with the Mediterranean and the rest of Europe. Because of these strong ties, Milan continued to develop as a cultural hub, turning its sights to fashion. Inspired by the fashion powerhouses of Paris, Milanese designers developed their own unique sense of style – think Prada, Versace and Armani, to name but a few. Milan was instrumental in the rise of prêt-à-porter (ready-to-wear) fashion and has become one of the “big four” fashion centres of the world alongside London, Paris and New York. Nowadays, Milan Fashion Week is one of the most important fashion events held around the world each year.