These Are the Most Magical Islands in the World, and Here's Why 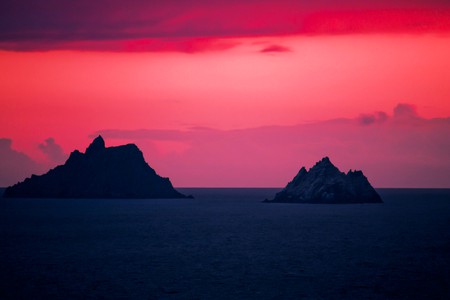 With the 40th anniversary of the Star Wars franchise being celebrated this week, we thought we’d introduce you to one of the most incredible filming locations from the blockbuster series: the magical islands of Skellig Michael and Little Skellig. Located just off the south-west coast of Ireland, the rocky isles have been attracting visitors for centuries.

In September 1910, George Bernard Shaw embarked from the coast of Kerry, south-west Ireland, in an open rowing boat. The five oarsmen plowed the waves for eight miles (12 km) and two hours before landing the playwright on the shore of an island that took his breath away.

In a letter, Shaw described Skellig Michael (Sceilg Mhichil), or the Great Skellig, as “the most fantastic and impossible rock in the world…where in south west gales the spray knocks stones out of the lighthouse keeper’s house, 160 feet above calm sea level. 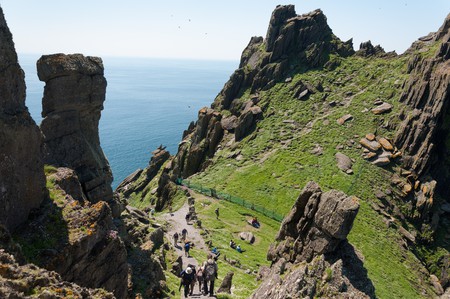 “The Bass Rock [in Scotland’s Firth of Forth] is a mere lump in comparison: both the Skelligs are pinnacled, crocketed, spired, arched, caverned, minaretted; and these gothic extravagances are not curiosities of the islands: they are the islands: there is nothing else.

“I tell you the thing does not belong to any world that you and I have lived and worked in,” Shaw told his correspondent. “It is part of our dream world.”

No wonder the islands have fueled the fantasies of the Star Wars team, no strangers to Ireland. To get a sense of the sights that awed Shaw, anyone contemplating a trip to Skellig Michael need only peruse the ending of Star Wars VII: The Force Awakens (2015).

Rey (Daisy Ridley), accompanied by Chewbacca, sweeps through space to the oceanic planet Ahch-To—”played” in the film by Skellig Michael. Its precipitous crags and crenellations and the luminous seascapes are haunting.

On alighting, she ascends its ancient staircase to the summit, where the hooded figure awaiting her is Luke Skywalker (Mark Hamill). She gives to him the lightsaber that once belonged to his father Anakin.

The Star Wars team returned to Skellig Michael for further filming on The Last Jedi, which opens on December 15.

Rising to 714 feet (218 metres) above sea level, the steps climbed by Ridley were once ascended and descended by Skellig Michael’s ascetic monks; the island was home to St. Fionán’s Christian monastery between the 6th and 13th centuries. Probably no more than 12 monks lived on the island at any one time. The island’s isolation made it perfect for their devotions.

The monks purified water in cisterns and grew vegetables in their gardens, toiling up and down the steps to get their morning catch of fish. 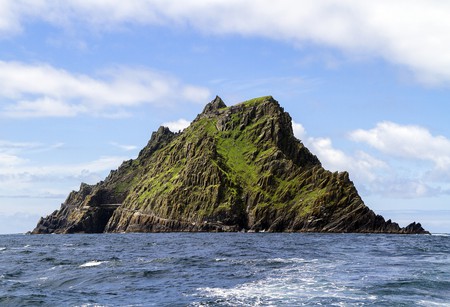 It wasn’t foreign marauders, but harsh weather and changes in the structure of the Irish church that caused Skellig Michael’s monks to relocate to Ballinskelligs Abbey on the Iveragh peninsula in Kerry.

When the monks abandoned Skellig Michael, they effectively returned it to its feathered owners. The islands are home to puffins (in late spring), storm petrels, kittiwakes, Arctic terns, black guillemots, razorbills, cormorants, as well as several species of gulls.

Travelers to the island today can marvel at the six remarkaby well-preserved clochán-style beehive cells in which the monks dwelled. They occupy a terraced shelf 114 feet (34 metres) short of the summit, along with two prayer rooms, oratories, stone crosses, and a church built in medieval times; there is also a hermitage. 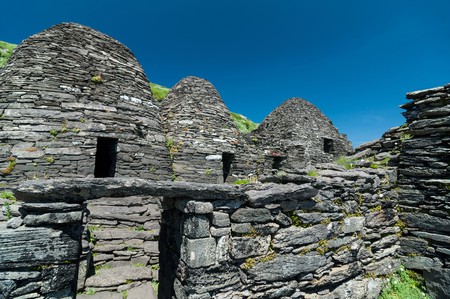 Little Skellig, which does not permit visitors, is the second largest gannet colony in the world. Anyone considering a trip to Skellig Michael should be respectful of the delicate ecosystem that supports the bird life, as well as the fragility of some of the monastic structures.

In 1996, UNESCO inscribed Skellig Michael onto the World Heritage List. It may be visited between May and the end of September, weather conditions permitting. 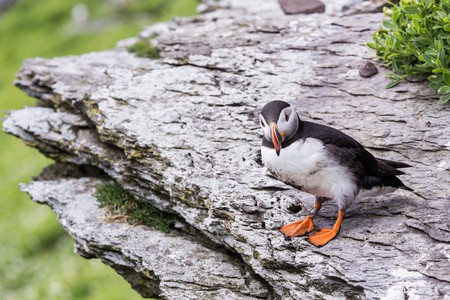 Visiting the monastery requires climbing the 618 uneven steps and ascend over 600 feet (180 metres). No one should attempt the steep gradient when the steps are wet, or stray from the recognized pathways.

Not every one can zoom into Skellig Michael on a space craft. Boats depart from Knightstown, Portmagee, Ballinskelligs and Caherdaniel. Try Skelligs Rock (skelligsrock.com) at Portmagee for 10am departures in season.