The 10 Best Restaurants In Corfu, Greece

An island with a rich and complex cultural heritage that has been ruled by various countries throughout its history, Corfu’s cuisine reflects these outside influences. Mixing the freshest of sea produce with a range of Greek and Italian influences, the dining scene in Corfu is a delicious experience. Here are 10 great restaurants in Corfu that showcase the island’s culture and cuisine.

Situated amidst the magnificent scenery of a grand Venetian fortress built around the sixth century, this restaurant not only offers up traditional Greek dishes but also those stemming from Corfiot cuisine, which is exclusive to the island. With the option of eating on the veranda, guests can dine in the splendidly historical opulence of the Old Fortress while peering out over amazing views of Garitsa Bay and the Ionian Sea. Dining at the Old Fortress Restaurant is a great way to enjoy Corfu’s cultural heritage while also sampling some of the local delicacies on offer.

Being an island, it is perhaps no surprise that the Corfiot diet revolves heavily around fish. There is a wealth of amazing seafood dishes to be had throughout Corfu, and Maistro makes the most of its beachfront location to create a symmetry between the ambience and the gastronomic experience. A particular favorite of many is the seafood pasta. Aside from fish, other house specialties include the gastra, lamb kleftiko and pastitsada which all go hand in hand with one of a rich variety of Greek wines on offer, of which a fair few are organic. 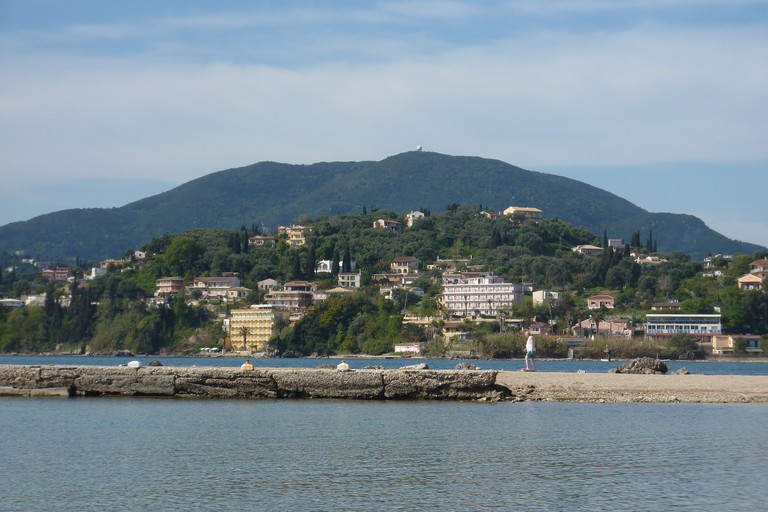 Corfu - Kanoni beach | © muffinn
Ranked at number 13 out of 50 stunning Rooftop Bars & Restaurants selected worldwide by CNN International, it’s easy to see why this restaurant deserves this accolade. In one direction is the ancient Old Fortress, which towers above Corfu town and, in the other, is the unsettled bay speckled by local fishing boats. Serving up the best of international and local cuisine in an atmospheric, lounge style, the Cavalieri Hotel‘s Roof Garden provides dramatic vistas along with fine dining, making it a sensation for the eyes as well as the palate. The building itself, built in the 17th century, also offers a grand sight.
Open In Google Maps
Corfu, 491 00, Greece
+302661039041
Visit Website
Give us feedback

Restaurant, Greek
Facebook
Email
Twitter
Pinterest
Copy link
Share
Map View
Run by the Italian-Corfiot Botrini family, Etrusco showcases their passion for both Italian and Greek cuisine: this award-winning restaurant has won many awards including Best Restaurant in Greece, Best Greek Cuisine and two Golden Chef’s Hat awards. Much of the stock is sourced from the restaurant’s own leafy garden, but the inspiration for dishes comes from all over the Mediterranean. This is evident in the preparation of food, as canapés are presented on top of a map and each one is placed over its country of origin. Dining in the antique courtyard completes the experience, while the range and creativity of dishes offers a great culinary experience.
Open In Google Maps
Kato Korakiana, 490 83, Greece
+302661093342
Visit Website
Give us feedback

Open since 1936 and still owned and operated by the same family, Taverna Tripa is a taste of Corfu in many ways. The fixed price menu has a range of tasty mezes which can be followed by spit roasted lamb or beef baked in parchment and washed down by an unending amount of the delicious house wine. The open courtyard often hosts local dancers who perform traditional Greek dances, and patrons are encouraged to take part and soak up the atmosphere. The proprietors will also take interested parties to the nearby museum. 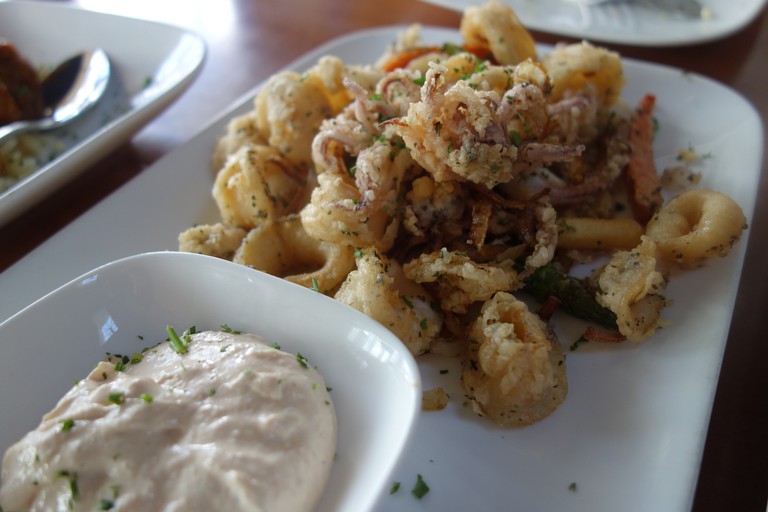 Akrotiri sits at the northwestern end of Corfu, surrounded on all sides by glorious views of sandy beaches and shimmering bays, thus making it the perfect lounge bar after exploring the surroundings or to just soak up the scenery. Atop the highest point of the climb between San Stefanos and Arillas, it is well worth drinking in the views of the surrounding bays at sunset while sipping on a coffee. They have a breakfast/brunch menu and a selection of fresh baguettes throughout the day, as well as draft beers and cocktails, cakes and ice cream.

Taking inspiration from the Greek yogurt that, of course, originates from the country, YogArt serves frozen yogurt made from fresh ingredients from its small store in serene surroundings. The traditionally designed building belies a vibrant and modern interior. There is a variety of conventional flavors, such as strawberry, chocolate and banana, and these can be topped with a range of foodstuffs from sweets, preserves and fruits. Dig a little deeper and you can get a true taste of the island with the flavor of the traditional Corfu sweet/flower koum kouat, which has been cultivated extensively on the island since 1924.

Market, Restaurant, Greek, Seafood, $$$
Facebook
Email
Twitter
Pinterest
Copy link
Share
Map View
A small, family-owned business, Klimataria is a quaint little restaurant in the center of the tiny fishing village of Benitses. With only 11 tables, the restaurant has a calm and intimate atmosphere that is permeated with the unique smells and flavors of each dish. With a heavy emphasis on fresh and seasonal produce, the menu varies depending on what is available from the local market at the time, but specialties include kolokythokeftedes (zucchini balls) and fish bourdetto. It is also possible to call ahead and ask for a specific meal, providing enough time is given to the proprietors to source the ingredients.
Open In Google Maps
Mpenitses, 490 84, Greece
+306972015875
Visit Website
Give us feedback 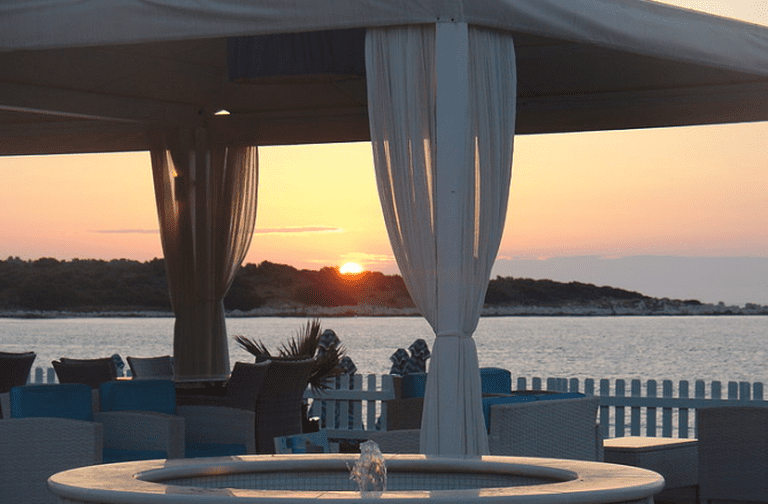 Pyramid Restaurant Cafe, Κερκυρα | Courtesy Pyramid Restaurant
A chic and modern restaurant, built out of stone and marble, Pyramid is a beach side eatery that provides the best in Mediterranean food cooked with the finest Greek produce and olive oil. Many ingredients come from the restaurant’s own garden and the site itself overlooks the sea, and is just a short walk from a natural lagoon. An extensive wine list complements the menu, and evening entertainment is often laid on in the form of musical acts that encourage participation. Late closing times mean that revelers can drink and dine long into the night.
Open In Google Maps
Κερκυρα, 490 81, Greece
+302663098495
Visit Website
Give us feedback

Restaurant, Italian, $$$
Facebook
Email
Twitter
Pinterest
Copy link
Share
Map View
Another restaurant on the island that focuses on the wealth of seafood available in Corfu, Ristorante Del Sole serves up the finest Italian fare, rather than traditional Greek delicacies. Elegant and sophisticated decor provide a relaxed and welcoming atmosphere and carafes of local wine are available to have with your meal. Specials include the scampi sauce risotto or the pergola penne. Open in the evenings down a small cobbled street in Porta Remounda, Ristorante Del Sole is well worth unearthing.
Open In Google Maps
Kerkira, 491 00, Greece
+302661032411
Give us feedback
Give us feedback