Where to Stay in Berlin and Experience It Like a Local 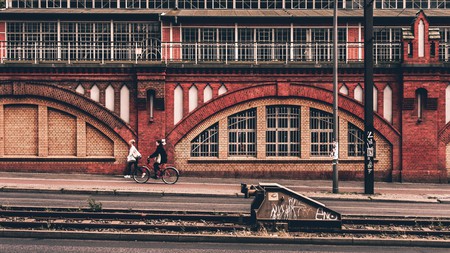 Get into a Berliner state of mind with a stay at one of the city's quirky, artful and design-driven hotels | © Dewang Gupta / Unsplash

Whether it’s the art-filled streets of ultra-hip Kreuzberg or the historical and elegant Charlottenburg – discover our insider’s guide to the best places to stay in Berlin to experience the city like a local, bookable with Culture Trip.

Composer Franz Von Suppé famously said: “You are crazy my child. You must go to Berlin.” So, why stay in a same-same hotel chain when you could be immersing yourself in the quirky, artful, design-driven, slightly mad, creative and open-minded German capital like a true local? Get into the headspace of the most dynamic of urban playgrounds by diving into some of the most colourful, idiosyncratic, welcoming and down-right decadent digs laid on by one of the best cities in the world. 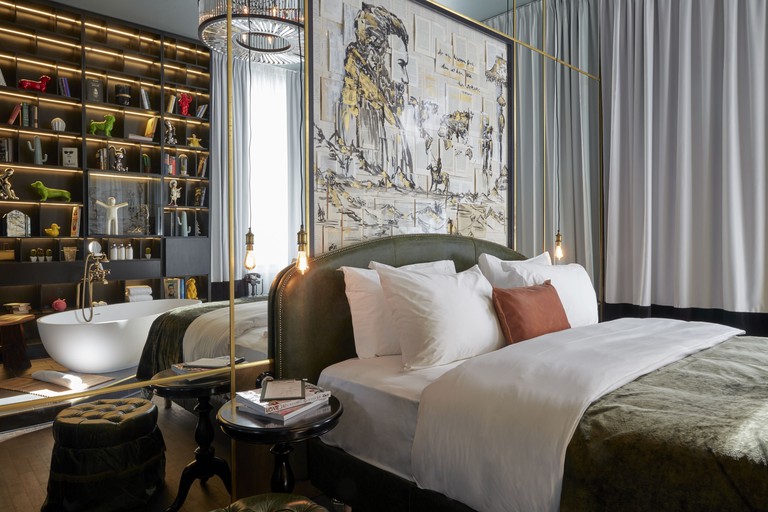 Courtesy of Sir Savigny / Expedia
Set in the old literary district of Charlottenburg, luxurious furnishings meet high design in this smartly besuited hotel, ideal for a romantic Berlin break (yes, Berlin can be romantic) thanks to mood-setting Marshall speakers, tactile velvet touches and come-hither beds in the rooms. There’s a sense of the classical meeting the modern here, and the sumptuous theme continues in the public spaces, too. It’s also close to the Berlin Zoo and within walking distance of wonderful fusion food at the Blend, plus the hotel has a curated programme of specialist tours – including a beard-stroking brewery escapade through crafty Neukölln. 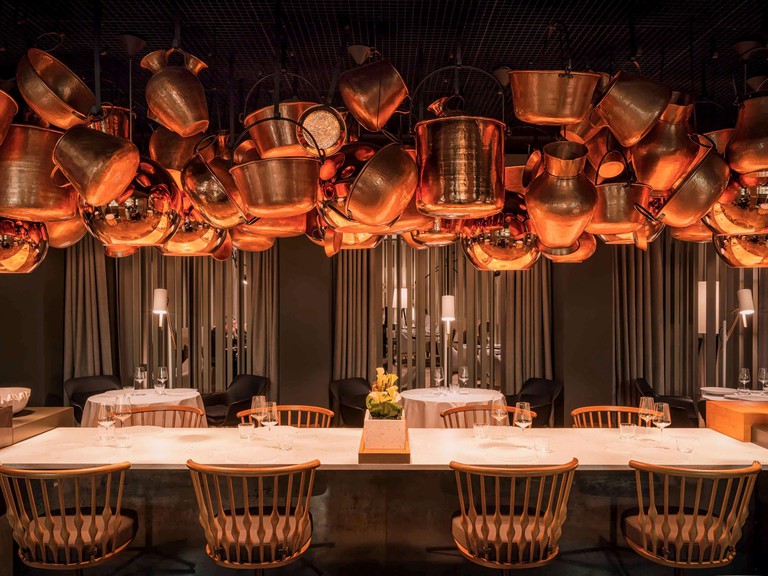 Courtesy of Das Stue Berlin / Expedia
Right on the edge of the Tiergarten, it’s a pleasant walk from Das Stue through the park to the Brandenburg Gate, or to a city river tour down the Spree. In the heart of the diplomatic district (diplomacy has always been important here), this converted building, the former Danish embassy, has a tasteful, restrained Berlin opulence about it. With a Michelin-star chef, a pool, a Finnish sauna and a gym, you’ll be calling it home in no time. Don’t miss fortnightly sessions at the Stue Bar for laid-back local music. 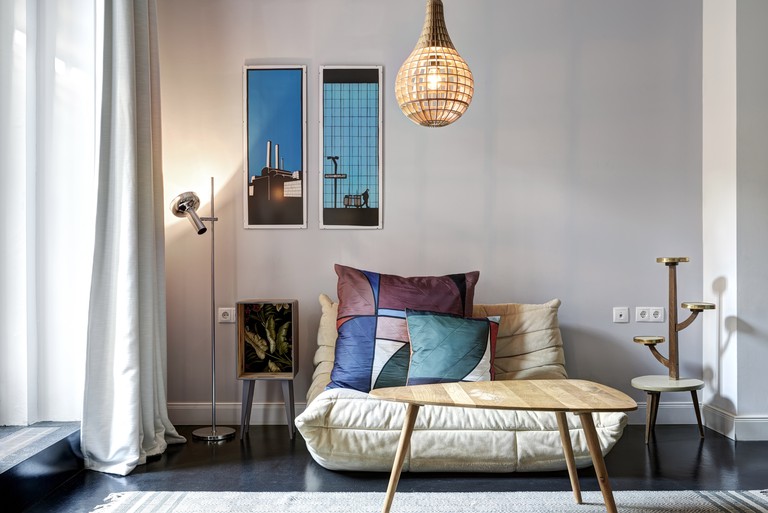 Courtesy of Gorki Apartments, Berlin
There’s a sense of timeless elegance in these high-end apartments, designed by Berlin-based interiors pro Sandra Pauquet and on-the-mark architect Kim Wang. Gründerzeit (wealthy 19th-century style) meets modern Berlin in accommodation that will have you toying with whether to even bother exploring the city at all – or just stay put, in your home away from home. In Mitte, you’re surrounded by restaurants and bars, but you also have a fully stocked kitchen, just in case you do choose to stay in. 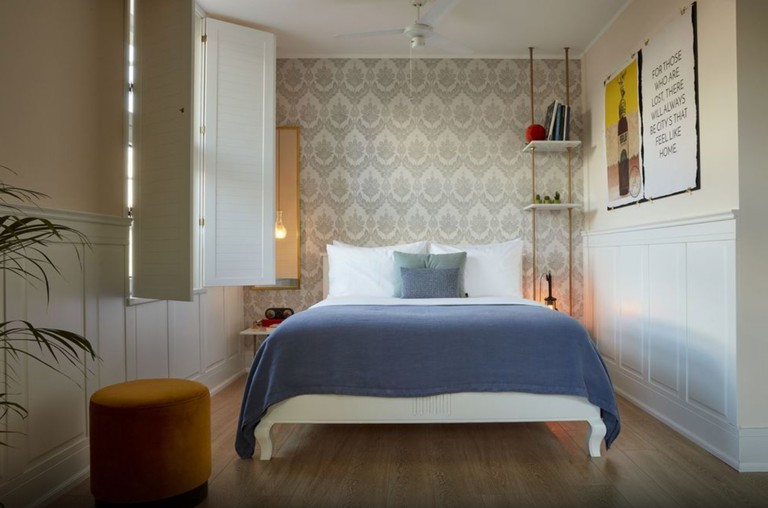 Courtesy of Max Brown Ku’Damm / Hotels.com
There’s an in-house bakery. Oh, you want to know more? Well, straddling the districts of Wilmersdorf and Charlottenburg, the decor in the hotel is an endearing mix of quirky and luxurious, and the aforementioned bakery also serves excellent coffee and an all-day breakfast, too. You’re surrounded by historical monuments, theatre, music and art, and within stumbling distance of legendary Bowie hangout, the Paris Bar, where he and Iggy Pop visited during their 1970s sojourn in Berlin. 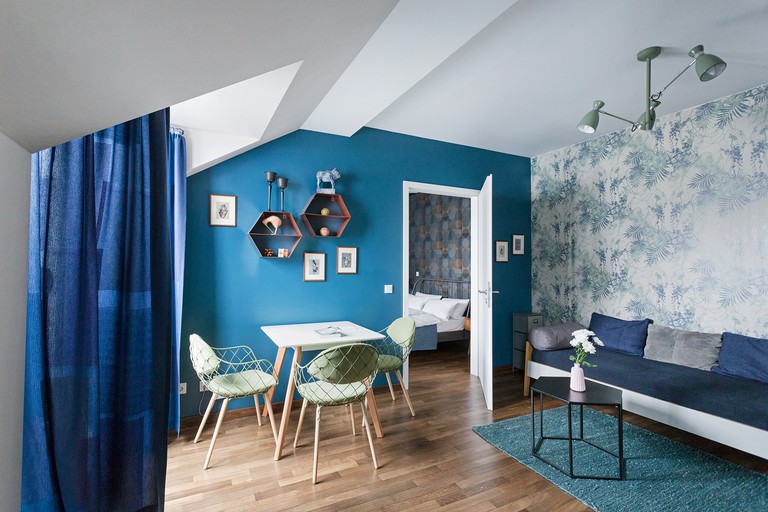 Courtesy of the Circus Hotel, Berlin
Hotel, hostel and apartments – this place has every level of Berlin base covered, from budget right up to luxury. The range of rooms, from classic singles to junior suites and apartments, promise to make your stay as comfy as possible with melt-into mattresses that will have you wanting to join the Circus permanently. Elsewhere, there’s modern German food in the ostPost restaurant-cum-library, a (sometimes) sunny roof terrace and an in-house microbrewery that hosts live music, karaoke and more. 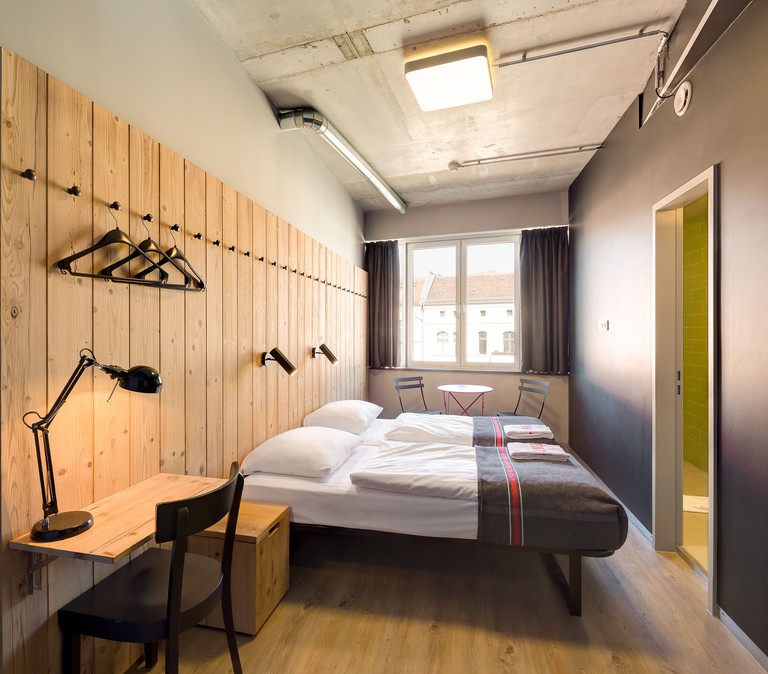 Courtesy of Generator Berlin Mitte / Expedia
This central Generator stay really leans into Berlin’s post-industrial aesthetic – all bare concrete and raw materials that manage to make those on a budget feel as if they are sleeping amid stripped-back luxury. In Mitte, meaning the middle, of Berlin, you’re close to excellent street food, a walk away from the highly recommended DDR Museum and in amongst the city’s legendary nightlife. You have been warned. 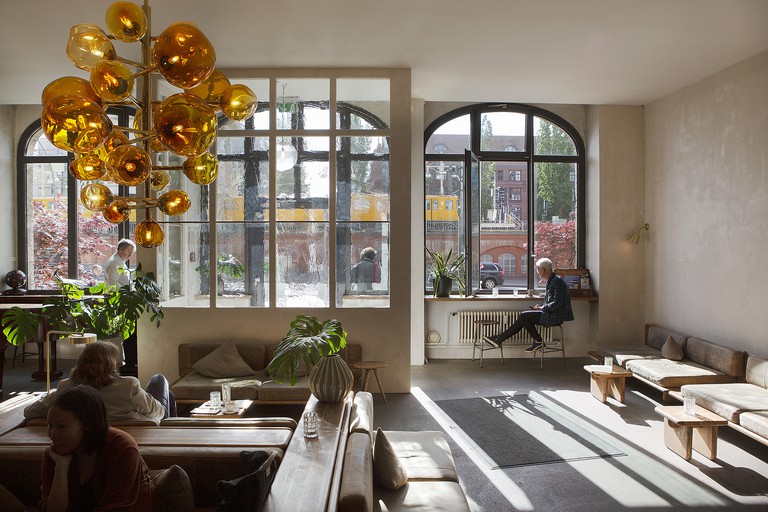 Courtesy of Michelberger Hotel, Berlin
In the buzzing district of Friedrichshain, this boutique hotel is infused with the Berlin spirit of artistic collaboration and offers rooms to suit all tastes – from the solo luxury traveller and couples who crave having a sauna in their room, to families seeking sizeable lofts that mix playground and bedroom in a surprisingly successful way. With a popular bar and courtyard that hosts events, you’re also only a 10-minute walk from the infamous Berghain club and just over the bridge from Watergate. 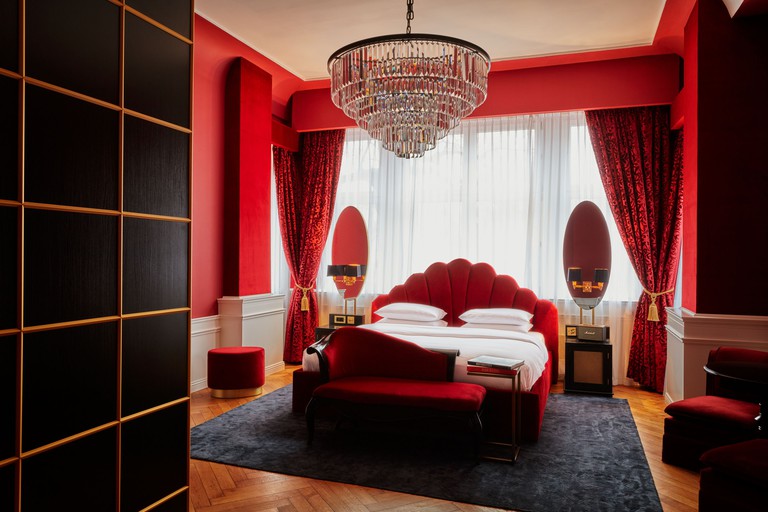 Courtesy of Provocateur Hotel / Expedia
Just down the road from Konstanzer Strasse U-Bahn – worth catching a train from for the retro-tiled platforms alone – this is one for all the lovers out there. Rooms give off an air of old Weimar decadence with sultry lighting and rich colours that will make you want to sling the Do Not Disturb sign over the doorknob – or end your night in the famously naughty KitKat Club. The Chinese-influenced restaurant and excellent bar draw the local crowds, too, so make time to mingle like a true Berliner. 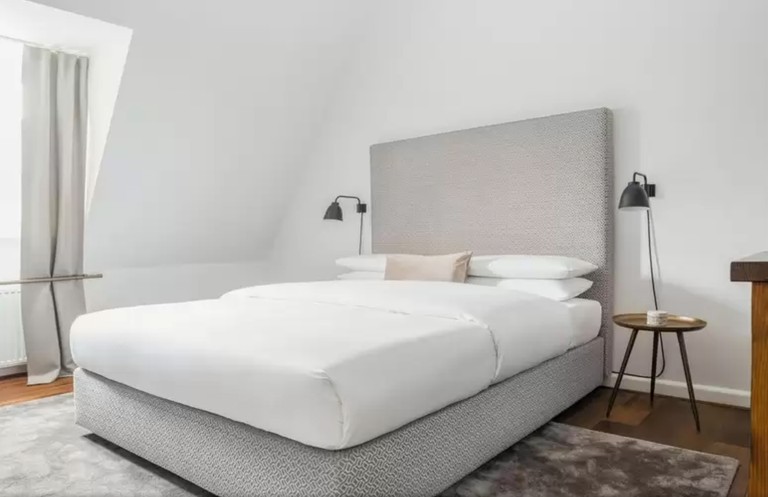 Courtesy of the Dude Berlin / Hotels.com
This laid-back yet luxe 19th-century mansion near edgy Kreuzberg puts you a short walk from Museum Island and a couple of U-Bahn hops from Alexanderplatz. One of the oldest buildings in the city, the rooms are cosy and well-appointed, and the attached Yada Yada breakfast club serves, as you might expect, a darn good breakfast of fruit-piled waffles and coffee from cult Berlin roastery Andraschko. 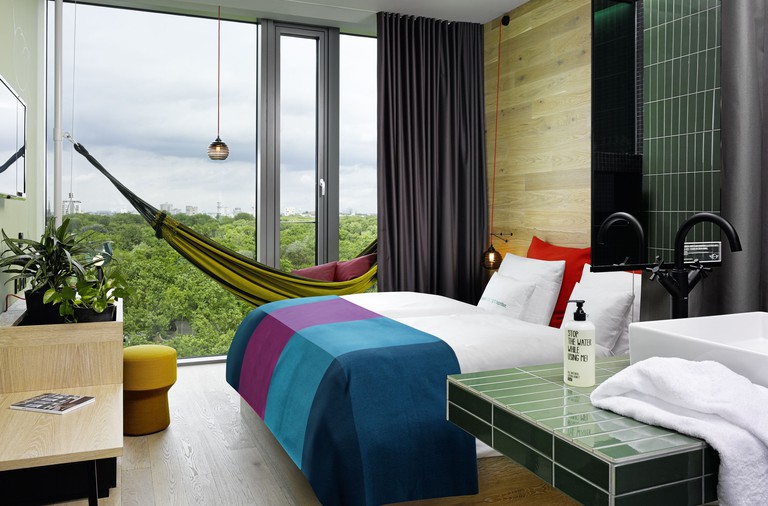 Courtesy of 25hours Hotel Bikini Berlin / Expedia
Monkey bottoms. You don’t expect that to be a selling point of a hotel. But where else in the world could you wake up and a few moments later be on a terrace gazing out at a baboon’s behind from Berlin Zoo? At 25hours, that’s where. Home to one of the best (and most popular) rooftop bars in Berlin, this hotel is all about the high-end quirk, with jungle-themed rooms, a free minibar and even free Mini cars for taking in the city, too.

Looking for more great Berlin hotels? Discover our guide to the best cheap places to stay in Berlin, bookable with Culture Trip.