10 Street Artists to Look for in Berlin

Berlin has long been a global capital of street art. From the murals that covered the west side of the Berlin Wall during the Cold War, to the pieces found across the city today, few creative progressions explore the intersection of art, society and politics quite like graffiti. With a mission to reclaim public space, graffiti transforms this city’s walls into enormous, always-evolving galleries. Here are 10 street artists to look out for in Berlin. 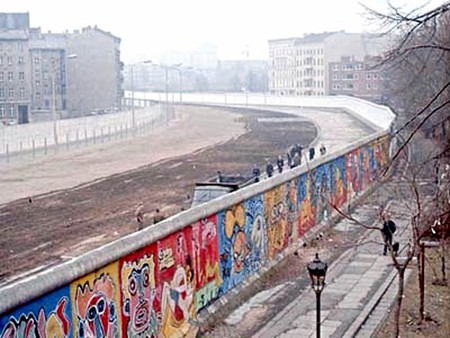 Known for being one of Berlin’s more ‘romantic’ street artists, El Bocho’s brightly colored graffiti is designed to improve upon the beauty of Berlin’s cityscape, rather than to criticize or alter it. Instead of producing his art directly on the city’s walls, he creates painted pieces on brown packing paper before pasting them to an urban surface. This style of paste-up graffiti means that El Bocho’s work doesn’t stay in one place for very long—the designs are often peeled off the wall and secreted away by some of the artist’s admirers. Currently, El Bocho is best known for his paste-up character ‘Little Lucy’, a wide-eyed, helmet-haired girl who is pictured as finding creative and morbidly hilarious ways to kill her pet cat.

This French photographer has recently showcased two series of graffiti artwork in Berlin–Face2Face and The Wrinkles of the City – which feature enormous paste-ups of black-and-white photographs. The Wrinkles of the City acts as a conversation between the dramatic history of Berlin –war, the fall of the Berlin Wall, the reconstruction of this once-divided city –and the residents of Berlin who lived through them. The buildings he displays these pieces on share pasts just as rich as his subjects: boarded-up apartment buildings, red-brick factories in early stages of ruin, a 20th century clock tower, the walls surrounding Checkpoint Charlie. JR’s portraits zoom in on his subjects’ unique facial features: wrinkles, scars, laugh lines, and eyes that hold the stories of a lifetime. 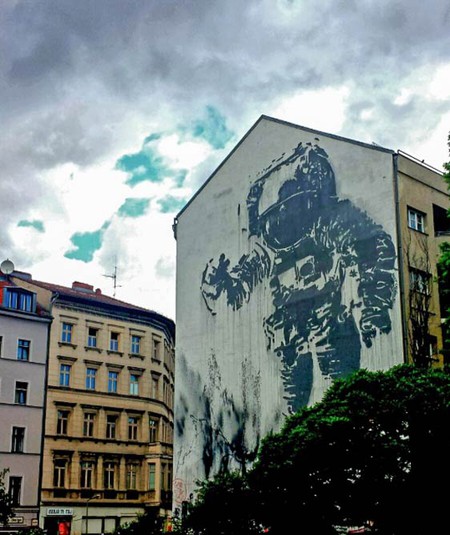 Victor Ash’s ‘Astronaut/Cosmonaut’ might be one of the most recognized works of graffiti art in the world. Reprinted on tee shirts, postcards, poster prints and stickers this mural is prominently displayed on the side of a white cement building in the Kreuzberg district of Berlin. ‘Astronaut/Cosmonaut’ tells the story of a spaceman suspended in both atmosphere and time. His face is obstructed by his helmet and black paint drips past his frame and all the way down the wall. The painter himself has been working in the graffiti art medium since the early 1980s and is considered one of the pioneers of contemporary Berlin street art. His pieces always aim to comment on present-day issues, especially those significant to the city’s youth. 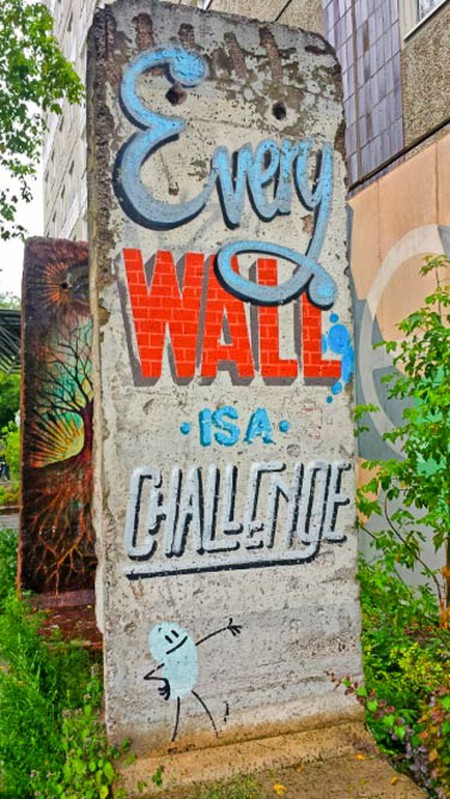 Vhils is one of the more notably aggressive of Berlin’s recent graffiti artists, adopting a ‘creation-via-destruction’ methodology. Vhils physically alters the surface of a building he is working on: using a hammer and chisel, corrosives or explosives to remove parts of the structure itself and repurposing an entire wall of brick, wood or cement into his canvas. He then paints over the undisturbed surfaces in a vibrant, striking white, revealing the etched design of his piece. Footnoted with the words ‘Go Forth’, Vhils’s work features portraits of local figures well-known to Berlin–people who have helped make Berlin the city that it is today.

Recognized by stark black-and-white stencils of young women and bubble-like x’s and o’s that float up around the piece, XOOOOX’s graffiti first appeared on the streets of Berlin in response to the commercial advertising that the artist felt was beginning to overwhelm the visual aesthetic of the city. After pasting advertisements torn directly from the pages of magazines onto walls around the city, XOOOOX transitioned to stenciled work that usually features slender women who appear to have been pulled from fashion advertisements themselves. XOOOOX’s stencils comment on the commercialism of superficial beauty and like much iconic graffiti art, works to reclaim Berlin’s streets from product advertisers.

For years Berlin’s pedestrians asked one another: ‘who is Linda’s ex?’ The question originated from a graffiti series created by the German sketch artist Roland Brückner, who used posters and sketches to document his painful break-up with the now-infamous ‘Linda’. The collection quickly took on a life of its own: other graffiti artists added to the conversation, begging Linda to come forward and reunite with her lovesick boyfriend. ‘Linda’s Ex’ pieces grew in popularity so much that the Berlin Museum für Kommunikation held an exhibition of the work. Today, Bruckner’s talent with street art has evolved into a picture book series, called ‘Mumpelmonster’, which chronicles the childhood adventures of Mumpelmonster and his friends. 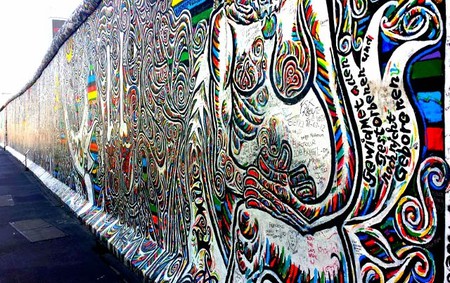 This Berlin-based yoga instructor has been placing small, cork figurines known as ‘street yogis’ in out-of-reach places around Berlin for years – most notably, atop street signs. Inspired by the artist Slinkachu, who places his own small figures (though not yogis) around the streets of London, Josef Foos began constructing tiny cork beings demonstrating different Hatha yoga positions. His mission is to bring the peace and balance of yoga practice into the everyday comings and goings of Berlin – part of the idea behind the street yogis is that anyone who is paying close enough attention can participate in their yoga practice. Stealing or altering a street yogi is discouraged, as to do so would be to work against their collective statement of peace. 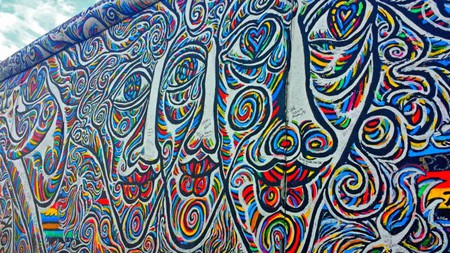 Alias is known for being one of the busiest street artists working in Berlin. At times, his pieces appear on walls around the city more than those of any other graffiti artist. Utilizing both paste-ups and stencils, his graffiti often comments on violence and portrays young men concealing their faces. Alias’s pieces are sometimes confused for those created by the globally-recognized Banksy, and while both artists use their work to engage in social and political criticism, the message of Alias’s designs are not always explicitly clear. Instead, Alias asks viewers to reflect upon his message, even long after they’ve passed by the artwork.

Working primarily in black, blue, white and orange spray paint and stencils, Rome-based street artist AliCé has worked in Berlin several times in recent years, focusing primarily on her mission to reclaim the identity of women from the overly sexualized stereotypes prevalent in modern media. Most of her work features strong women who defy conventional interpretations of beauty and display a clear agency over themselves and the situations around them. One of the most notable features of her subjects is their eyes, which are easily spotted on a wall and often seem to express a challenge to the expectations of onlookers.

BLU’s ‘The Pink Man’ is an enormous mural visible from the Oberbaum Bridge in Berlin’s Kreuzberg district, and one of the most famous works of graffiti art in the city. ‘The Pink Man’ features a building-sized monster made up of hundreds of tiny, naked humans clinging to one another in fear. The monster, mouth gaping, appears ready to consume one of the miniature humans. Recently BLU –who has long been one of Berlin’s top street artists–and his work were at the heart of a heated debate around the question: ‘who owns a city, its financial investors or its people?’ Faced with the threat of gentrification that would result in the destruction of two of BLU’s most celebrated pieces, the artist himself recently painted over the works, citing that he would rather destroy his own art than have it destroyed by the ‘zombification’ of the city. In response to the destruction of these murals, BLU’s co-creator, the artist Lutz Henke, wrote that he hopes the act will function as ‘a wake-up call to the city and its dwellers, a reminder of the necessity to preserve affordable and lively spaces of possibility…stress[ing] the social function of artistic interventions where others fail to advance.’ Although the destruction of such important piece of Berlin’s artistic history was heartbreaking to many, the symbolic removal of this piece may send just as strong a message to the city as the piece itself once did.