Everything You Need to Know About May Day in Berlin 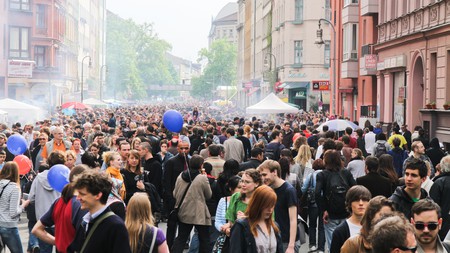 Each year on May 1, Berlin ignites in its annual May Day celebrations. For over two decades, the much-anticipated ritual has seen the city erupt in leftist protests, street parties and open-air raves. Possibly the most ‘Berlin’ day there is, May Day is the bizarre, politically charged celebration that kicks off the start of summer with a literal bang. Here’s everything you need to know about celebrating May Day in Berlin.

How May Day started

On paper, May Day isn’t the most exciting festival in Germany. Official marking Labour Day, it’s a time where trade unions and the Social Democrats organize rallies and protests, often fueled by cheap beer, hearty German food and long speeches. However, in the German capital, they kick this tradition up a notch with massive leftist demonstrations, with oceans of people dancing at open-air parties and an incomparable energy of rebellion, chaos and anarchy. Kreuzberg is the original stomping ground for the day, with the SO 36 district and the Kottbusser Tor area turning into a war zone as protesters clash in violence with police. Much of this revolutionary attitude was born out of the historic events on May 1, 1987.

On this day, the atmosphere in leftist groups was already tense because of a series of crackdowns by the government and police. Initially, the May Day celebrations were peaceful, until the police forced new social groups, mainly those who were perceived as extreme-left, to leave the trade union’s demonstration. A riot broke out, and the police were forced to retreat from the SO36 area, as protesters overturned an empty police car. They then used construction vehicles and parked cars to create barricades in the entire area, which were then set on fire. Anti-fascism and anarchy engulfed the area, marking a turning point in the city’s history. Today, the atmosphere is subdued in comparison, however, there is still an energy of rebellion, violent protest and anti-establishment in the air.

Today, May Day signals two opposing festivals in Kreuzberg. There is May Day of the violent, leftist protests, and Myfest, a peaceful street party, and the two celebrations come together, bringing a day of unrivalled partying and energy to the city. Next to concert stages, Marxist speeches and chants will erupt, and at a few of the local bars you’ll receive a free beer or shot if you’re able to recite one by heart. On this day, locals and visitors take to the streets of Kreuzberg, with a beer in hand and excitement around them to immerse themselves in Berlin’s sought-after edge. Political chants will meld into the melodic thump of techno, as stages, impromptu raves and food vendors set up around the area to help create one huge street party. Attendees can enjoy the best of both festivals by starting out at a protest and ending the night at a rave, or they can opt purely to enjoy the debauchery of Myfest. On May Day, Kreuzberg is yours for the taking, and visitors can immerse themselves in the liberal attitude however they see fit. 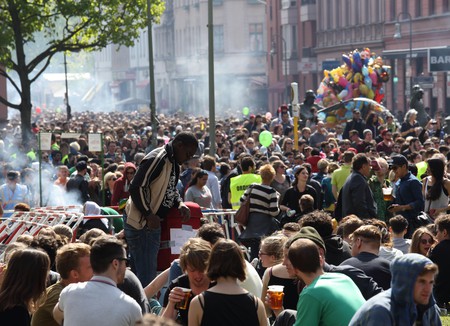 The place to be on May Day is Kreuzberg. If you aren’t interested in protesting, you can head to Oranienstraße or Görlitzer Park to enjoy the open-air raves and the Myfest street party. Otherwise, Kottbusser Tor is a hotspot for protest and anti-establishment attitudes. All are welcome to join in, but remember these groups mean business and the ‘extreme-left’ are there to protest just about everything. So if you want to yell ‘f•ck the system’ at the top of your lungs, head on over; otherwise, enjoy the peaceful parties just a few streets back. However, if large crowds, thumping music and leftism isn’t your thing, it’s best to stay out of the area. Central neighbourhoods of Berlin, like Mitte, will be rather quiet, and you can enjoy the public holiday in your own, relaxed style. 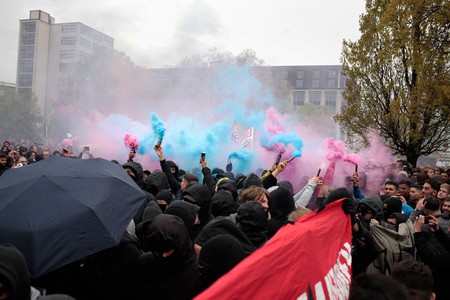 May Day demonstration marching through the quarters of Kreuzberg and Neukolln, Berlin | © LE PICTORIUM / Alamy Stock Photo
Give us feedback