A History Of Berlin's Most Famous Building: The Reichstag

Thanks to its historical significance, the Reichstag building is one of the most famous landmarks in Berlin. What makes the Reichstag so well-known is not merely its architecture, nor the the fact that is the current seat of the German Parliament (the Bundestag). What gathers curious onlookers from around the world has more to do with the dramatic events of its past, including the role it played in the rise of the Nazi regime.

From the time construction began in 1884, the Reichstag reflected the tumultuous nature of German leadership for years to come, almost as if the building itself were a bad omen. Kaiser Wilhelm I, who was the Emperor at the time, was responsible for laying its foundation stone. Yet he tried and failed twice before getting it right. The Kaiser didn’t even like the building to begin with because the Reichstag’s neo-baroque dome would be even greater in stature than the city castle. 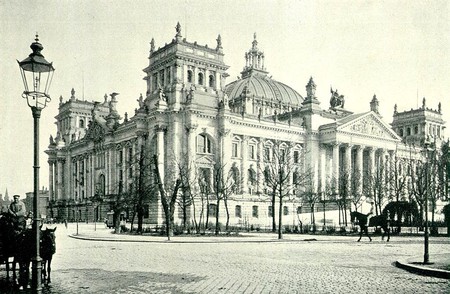 Indeed, the parliamentary rule of the late 19th century was subsuming the control of the monarch, and the Reichstag became an imposing symbol of this fact. Upon its completion ten years later, Kaiser Wilhelm II, who took control after his grandfather died, wouldn’t allow the customary inscription of the words ‘Dem Deutschen Volke’ or ‘To the German People’ to be added to the building. Of course, in hindsight the Kaisers’ disdain for the building was rather petty in comparison to the ways that the Reichstag intertwined itself with German political history in the decades to come.

The building did, however, enjoy a brief interlude of political peace and prosperity when it served as the legislature of the Weimar Republic starting in 1919. Yet, less than 15 years later, the Reichstag rose up in flames under suspicious circumstances that are still contested today. An unemployed, self-proclaimed communist, Marinus van der Lubbe, took responsibility for the arson, but there is much debate about whether he was really the one who committed the crime. There is one thing that historians do know for sure: Hitler used the attack to discredit the communists, resulting in his subsequent seizure of power. 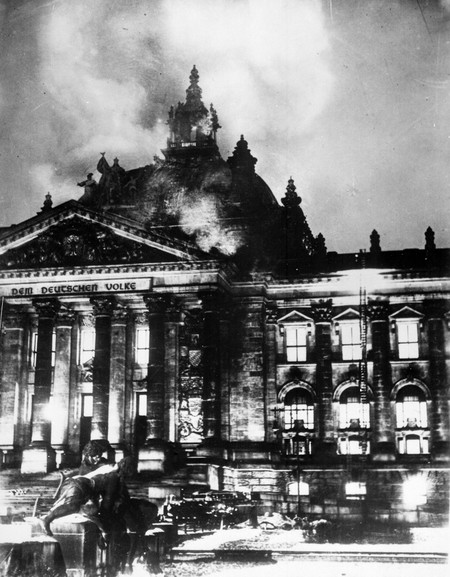 The Reichstag’s dome and chamber were damaged in the fire, and then it was further destroyed during WWII. Repairs were finally completed in 1971, this time, without the lavish dome that defined its structure in its early days. The building wasn’t used as the seat of Parliament until after German reunification in 1990. Throughout the duration of the decade, the Reichstag was subject to continual remodeling efforts. Most notably, a new glass dome was added where the old one used to be, a symbol of a modern beginning for Germany. The dome offers a spectacular 360º view of the city, and allows sunlight to emanate down to the floor of the parliamentary chambers. There are even electric features, which help regulate the amount of sunlight that filters into the space. 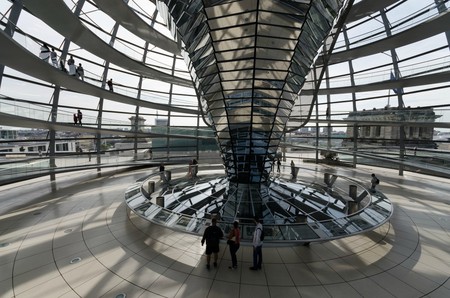 inside the Reichstag dome | © Clément Belleudy/Flickr

Today, it is possible to visit the Reichstag, but for those who would like to have a look inside, it is typically necessary to make an appointment in advance. For more information, click here.