Discover The Delights Of Amano's MANI In Berlin, Germany 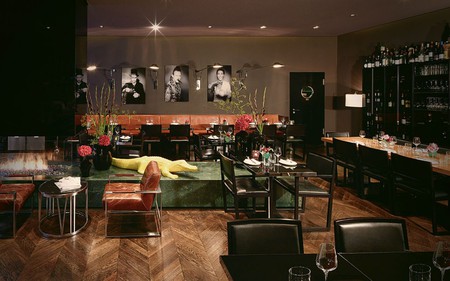 MANI is nestled in Amano’s Group boutique hotel on Torstraße. The restaurant is a momentary escape from Berlin’s central Mitte district. Here patrons enjoy Eastern Mediterranean flavors of Israeli-inspired dishes with a touch of French elegance.

Opened in 2012, MANI restaurant is part of the Amano Group, comprising bars, hotels, and bistros around Berlin. Twice each year, its Argentinian head chef Octavio Oses Bravo travels to Israel where he informs himself about budding culinary trends and tried-and-true traditions, and returns to blend them to create MANI’s signature dishes. While the dinner menu itself is subject to seasonal updates and patrons’ preferences, the lunch menu accommodates biweekly changes. Lighter and faster, the business lunch is more reasonably priced and is created to send the patrons on their way satisfied and yet without traces of midday drowsiness. 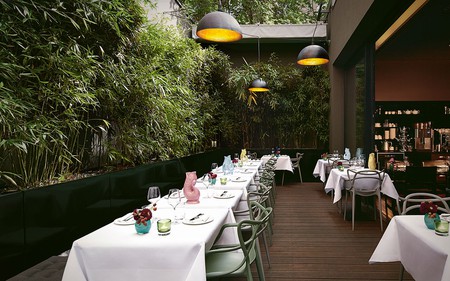 Patrons are often encouraged to order to share from the wide range of MANI’s starter platters, or ‘chuzpeles,‘ which aim not only to create culinary delights in the form of their sophisticated presentation and taste but also boast the familiar casual ambiance of the restaurant. This ranges from the familiar creamy hummus and freshly-baked petite pita bread to the unusual and yet equally delightful taste and texture of baked cauliflower with salted lemon, toasted almonds, and garlic. Oriental and Mediterranean flavors are subtle – an appetizer could carry notes of exotic rosewater, while the lamb meat is tenderized with pomegranate molasses. 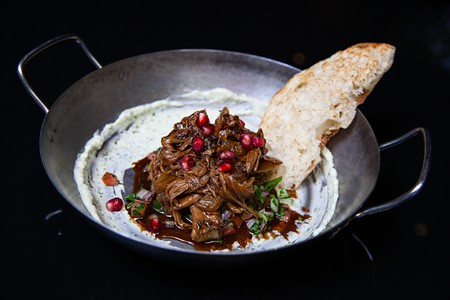 Tenderized and flavorful | Courtesy of MANI

MANI‘s setting and atmosphere reflect both the familiar and forward-thinking philosophy of the Amano Group; guests can choose to sit in the bamboo-adorned courtyard or the soothing softly lit interior, where the ‘at-home’ feeling is heightened through the fully on-view open kitchen. A mix of local and international guests frequent MANI at all times; weekends are the busiest times, although it would be clever to reserve table on any given weeknight.

In line with MANI’s aspiration to a relaxed atmosphere, the wine carte chooses its lot based on their agreement with the served dishes, straying away from pretentious or ‘forced options.’ Patrons might find added delight in the 2015 Riesling ‘Auf der Mauer’ Weingut Bassermann-Jordan, or seek deeper notes in the 2013 ‘Les Grandes Murets.’ The wine menu’s fine selection is the result of Klaudia Boyke’s endeavors, who serves both as the restaurant manager and MANI’s discreet wine connoisseur.

Winner of the ‘Scene Restaurant 2012,’ its refined menu was also celebrated by the renowned gourmet magazine DER FEINSCHMECKER as one of the best destinations for national cuisine in Germany in 2016. Its relaxed ambiance and its dynamic culinary experience have turned MANI to a must-try spot for fine dining in Berlin.