&#xA9; James Fancourt
On foot, Berlin is a city that rewards the curious. Abandoned spaces, forgotten buildings and architectural throwbacks can be found hiding throughout the city. The history of 20th century Berlin and the fall of the Soviet Union have left rich pickings for those who know where to look. Photographer James Fancourt shares some of his finds with us.

Berlin’s unique history is one of the most attractive qualities the city possesses. From the buildings in Mitte peppered with bullet holes from World War II, to the long stretch of the Berlin Wall still intact at East Side Gallery, the city is full of reminders of its rich past. It’s because of this past, most notably the fall of the Soviet Union, that the area is such a great place for those seeking urban exploration opportunities – delving into the many abandoned places that lay in and around the city.

Beelitz Heilstätten is probably the most well-known abandoned location in Berlin. A former sanatorium, it was used as a military hospital during World War I (where Hitler himself was a patient) and World War II. After 1945, it was adopted by the Red Army and served as the biggest Russian military hospital outside of Russia. It was abandoned in 1994.

Stadtbad Lichtenberg (shown above) is an impressive public bath in the east of the city that has been closed since 1991.

As the wallpaper slowly peels away after years of exposure to the elements, Russian newspaper from the USSR is often uncovered – a common sight in the places once occupied by the Red Army around Berlin.

Bahnbetriebswerk Pankow-Heinersdorf (above) was an area used for train maintenance in the days of GDR. It now lies abandoned, with the impressive roundhouse slowly deteriorating.

Heilstätte Grabowsee (above) was a tuberculosis hospital between 1896- 1945. It was then taken over by the Soviet Union’s Red Army and used as a military hospital until it was abandoned in 1995. 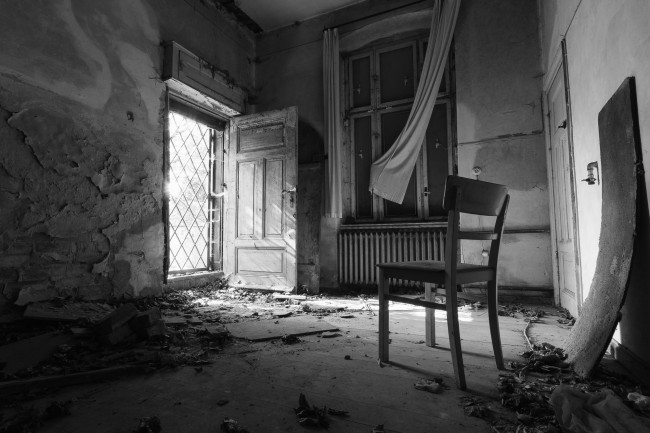 An abandoned house in the northwest of Berlin.

There are also more recently abandoned complexes in Berlin. The photo above shows the swimming pool of an empty hospital in Buch, just outside of the city.

Pictured here is one of the rooms at Wünsdorf-Waldstadt. This military complex served as the Red Army’s headquarters in Germany, and has been slowly succumbing to nature and the elements since it was abandoned in 1994.