Panorama of the Russian War Memorial at Treptower | © Drrcs15 / WikimediaCommons

Seventy-five years ago today, on June 22, 1941, Nazi Germany attacked the Soviet Union – breaking the non-aggression pact between both countries. That date marked the beginning of the Great Patriotic War, as the conflict between the two former allies was termed in the Soviet Union. After the war had ended, the Soviet authorities ordered the construction of three grandiose monuments in Berlin to honor the memory of the roughly 80,000 soldiers of the Red Army who fell in the battle for the city. The largest and most important of these monuments is the one in Treptower Park. Sebastian from Between Distances takes us there.

Berlin occupies a special place in the history of the Great Patriotic War – as the conflagration between Nazi Germany and the Soviet Union is known in Russian historiography. The Battle of Berlin was the last great offensive in the European Theater and saw the Red Army bitterly fighting against not only the leftovers of the Wehrmacht and Waffen SS but also the old men of the Volkssturm and the children of the Hitler Youth. This victory was commemorated with three lavish monuments in Berlin. 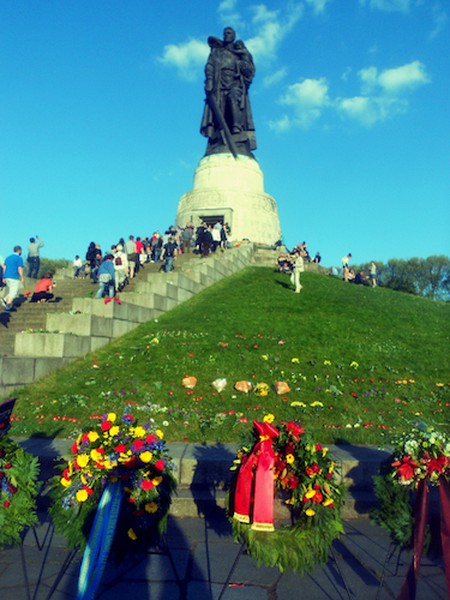 Following the defeat of Nazi Germany, the Soviet Union and the Western Allies occupied the country until 1949 – at which point the German Democratic Republic and the Federal Republic of Germany (East and West Germany) were established. During those four years, the Soviet authorities built three opulent monuments in Berlin dedicated to the memory of the roughly 80,000 soldiers of the Red Army who fell during the final battle for the city. The first one was built so hastily after the end of the war that it found itself in the British sector of Berlin after the city was divided. The other two, in the Pankow and Treptow districts of the Soviet sector of Berlin, were unveiled in 1949 – shortly before the establishment of the German Democratic Republic.

The monument in Treptower Park, built in the Socialist Realist style favored by Stalin, is the largest Soviet war memorial outside of the Soviet Union. It is also the resting place of roughly 7,000 soldiers of the Red Army. Visitors enter the monument in Treptower Park through a stone arch and walk to a small statue of a grieving woman representing the Motherland. A long avenue lined with weeping willows leads up to two giant Soviet flags made of red granite, below which two grieving soldiers stand guard.

Sixteen stone sarcophagi line a huge open area. Each sarcophagus represents a Soviet Republic (SSR) – back then they were 16, but the Karelian SSR was dissolved in 1956, leaving only 15 Republics until the end of the Soviet Union. The sarcophagi are decorated with military reliefs and engraved with quotes of Stalin (in German on one side and Russian on the other) written in gold letters. An imposing statue of a Soviet soldier standing atop a crushed swastika is the centerpiece of the monument. The soldier was immortalized carrying a German child and vigilantly holds a huge sword with his right hand. The statue is 12 meters tall. The base of the statue is also a crypt, which is decorated with an elaborate mosaic showing grieving Soviet soldiers and citizens. 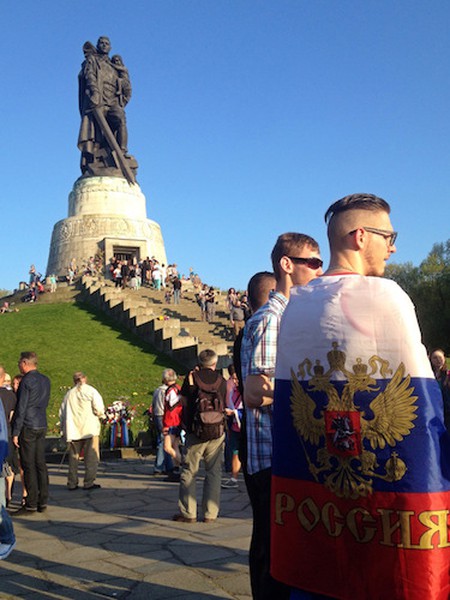 The monument at Treptower Park manages to unite solemnity, grandeur, and kitsch. Its proportions are enormous, which is meant to overwhelm the observer – a typical feature of totalitarian architecture. The combination of military imagery with quotes by one of the worst dictators of the 20th century distracts the visitor from the commemoration of the victory over Nazism – and redirects it toward Stalin’s cult of personality.

The Russian government pays for the expensive upkeep of the monument at Treptower Park. Thousands of people visit the monument every year on May 9th to commemorate the end of the Great Patriotic War. Veterans tell their stories, musicians play Soviet songs, and nostalgia for Communism is given free rein. At the same time, an unhealthy mixture of Russian nationalists, conspiracy theorists, and Stalin admirers also attempt to use the event for their own ends – including the financing of pro-Russian militias in Eastern Ukraine or whitewashing Stalin’s legacy. 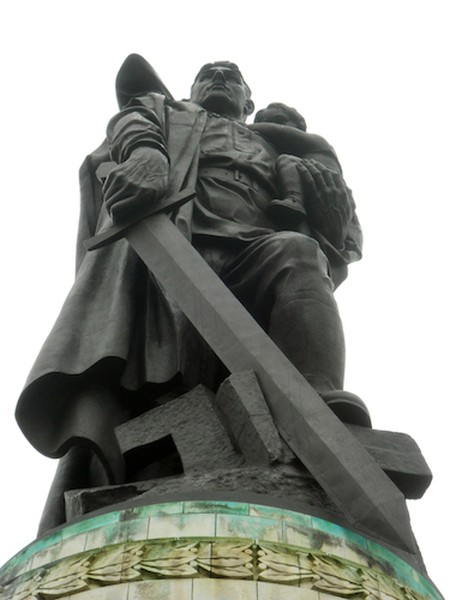 The three Soviet monuments in Berlin are well worth a visit, particularly the one in Treptower Park. The monumental stylization of victory on this gargantuan scale is best witnessed in person – and is nothing short of impressive.