A Tour Of The WW2 and Cold War Relics In Berlin 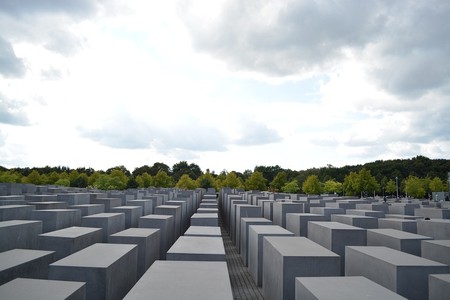 While almost all of Germany was ravaged by the Second World War, few cities have had a history as tumultuous as Berlin’s. While Germany’s capital city has been reconstructed beyond recognition out of the rubble of the war, whichever way you turn in this city, you are bound to come across relics and monuments related to the Second World War and Cold War. Lest We Forget. 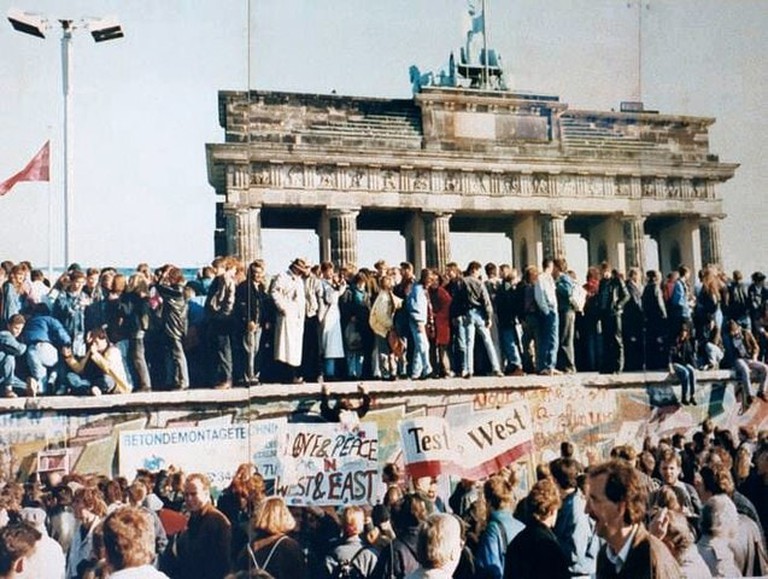 West and East Germans at the Brandenburg Gate | @ wikimedia | @ wikimedia
Brandenburg Gate, the icon of Berlin and one of the most visited sites in Germany, has been through both glorious and tumultuous periods since its construction in the 18th century. When the Nazis rose to power, the gate was used as a party symbol. On 30th January 1933, the Nazis held a torchlit procession through the Gate to mark their supreme power. During the Second World War, the Gate was severely damaged by bullets and bombs. When the war ended, the wall was restored, though signs of the wreckage remained for years afterwards. With the construction of the Berlin Wall, the Gate was closed off in August 1961. With the Revolutions of 1989, the Wall was torn down and the Brandenburg Gate came to be recognized as a symbol of peace and unity. 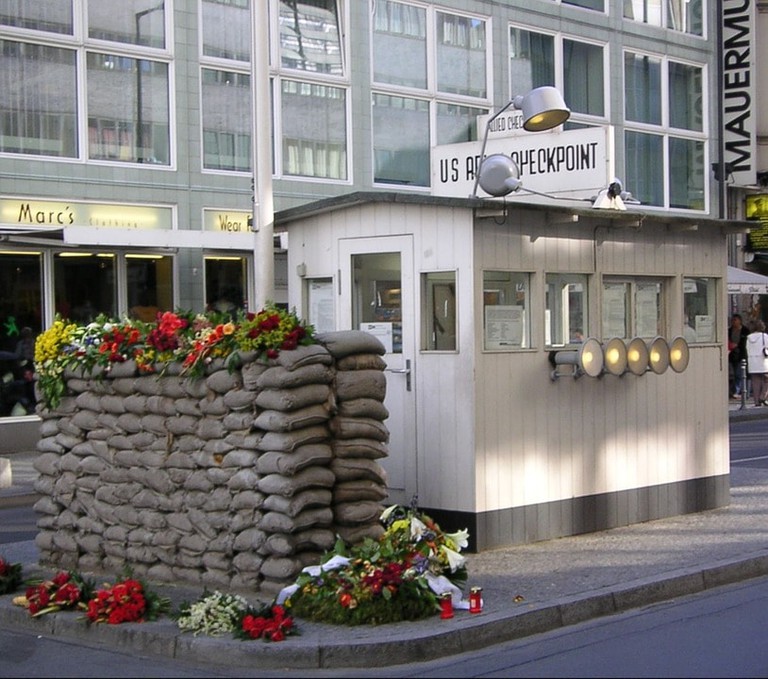 During the Cold War, Checkpoint Charlie served as the crossing point between East and West Berlin. In October 1961, Checkpoint Charlie witnessed a tank confrontation between the American and Soviet armies that lasted over 16 hours. With sandbags and uniformed guards still in place, this is understandably a favorite photo stop for tourists. The adjoining open-air museum documents failed as well as successful escape attempts through Checkpoint Charlie from East Berlin and educates visitors about the restless political conditions of that time. 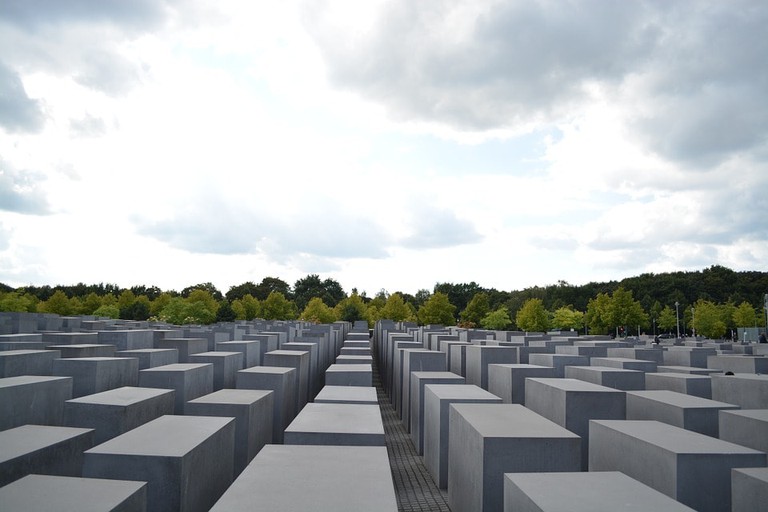 Holocaust Memorial in Berlin | © Meli1670 / Pixabay | © Meli1670 / Pixabay
Holocaust Memorial, or Memorial to the Murdered Jews of Europe, consists of 2711 concrete slabs of varied sizes arranged in a grid covering 19,000 square meters. Though this architecture is not a cemetery, it closely resembles one. The sculpture’s symbolism has been variously interpreted since its inauguration in 2003, and often criticized for commemorating only Jewish victims. This architecture is accompanied by an Information Center, which documents the inhuman cruelty that Jews were subjected to during the Nazi rule. 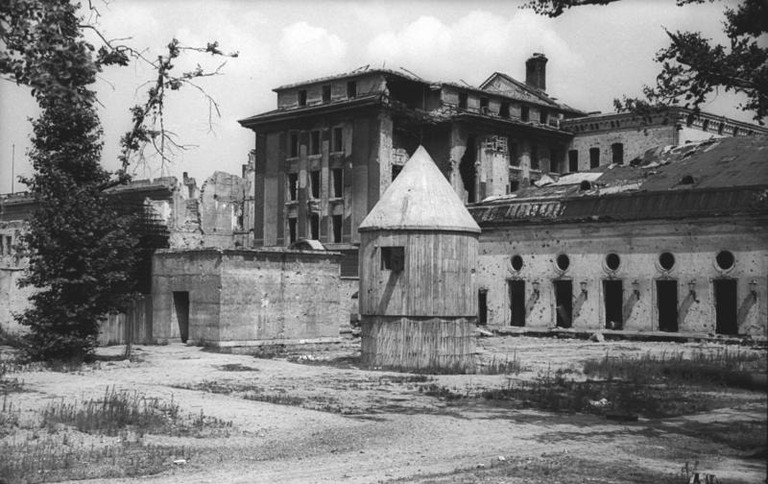 July 1947 photo of the rear entrance to the Führerbunker | © Bundesarchiv, Bild / wikipedia

The Führerbunker was an air raid shelter used by Adolf Hitler and his staff from 16 January 1945 until the very last week of the Second World War. This was also the venue where Hitler and Eva Braun got married, committed suicide soon after and were cremated. The shelter was demolished during the war, though the underground section remained in its original condition until much later. Though this site is today only a parking lot, it attracts visitors because of its immense historical significance. 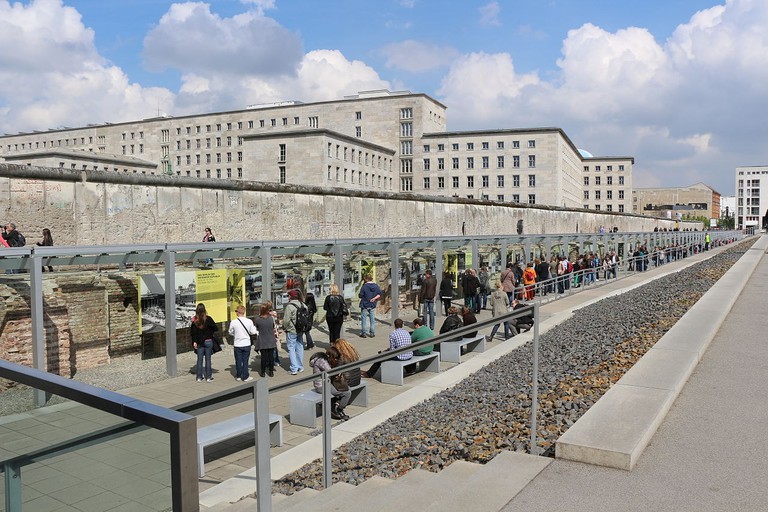 The site of a former office building of the Gestapo is today occupied by an indoor-outdoor history museum called Topography of Terror. Three permanent bilingual (English and German) exhibitions walk visitors through the history of the site and the heinous crimes committed by the Nazis. Visitors must be prepared for an extremely disturbing account of how the building that existed in this site was used for torture and execution, before it was razed to the ground during the Second World War. 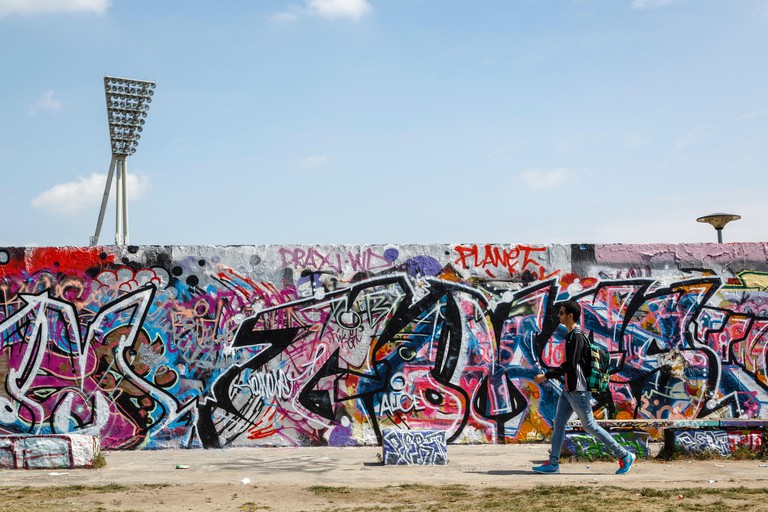 On the morning of 13th August 1961, Berliners woke up to find themselves cut off from friends and family by the infamous Berlin Wall constructed overnight upon the orders of the Communist government of the German Democratic Republic (GDR, or East Germany). The purpose of this wall was to prevent the mass flow of East Germans into West Germany during the Cold War. With barbed wire, layers of nails, strong floodlights and deep trenches in place to prevent escape attempts, the Berlin Wall deserved the name given by the locals – The Death Trap. The wall gates were finally opened in 9 November 1989, the occasion celebrated with revelry that rolled on for days. Over the next few weeks, locals from both sides smashed the wall down bit by bit, making way for the great Reunification of Germany. Ruins of the wall still remain as a stark reminder of the senselessness of war and as a symbol of human rights and freedom. 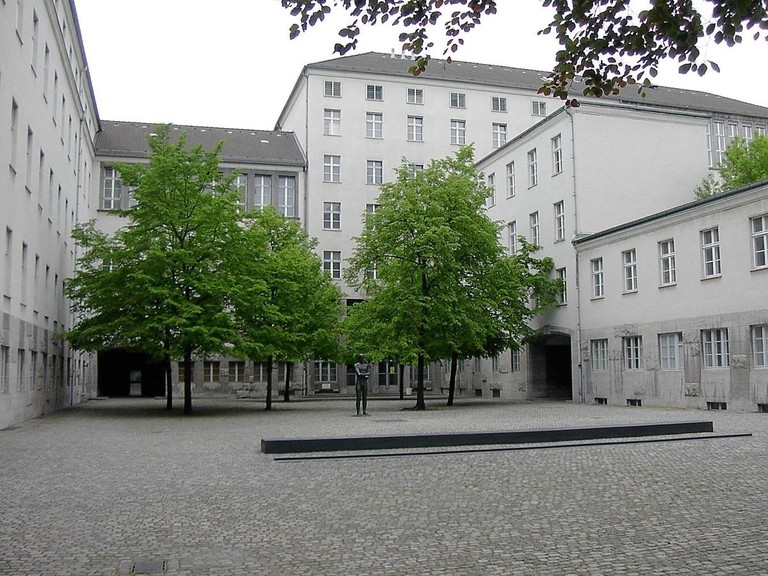 The courtyard in the Bendlerblock where the 20 July conspirators were executed. The Memorial to the German Resistance is located in the buildings to the left of the photo. | © Adam Carr / Wikimedia Commons

The German Resistance Memorial Center is a part of the Bendlerblock (the Ministry of the Reichswehr after World War I and used by several departments of the Nazi army). The memorial commemorates members of the German army who unsuccessfully attempted to assassinate Hitler on 20th July 1944, and were executed by a firing squad at this site. Today, the memorial symbolizes overall German Resistance by individuals and groups against the National Socialist dictatorship between 1933 and 1945 and is also a center of learning. 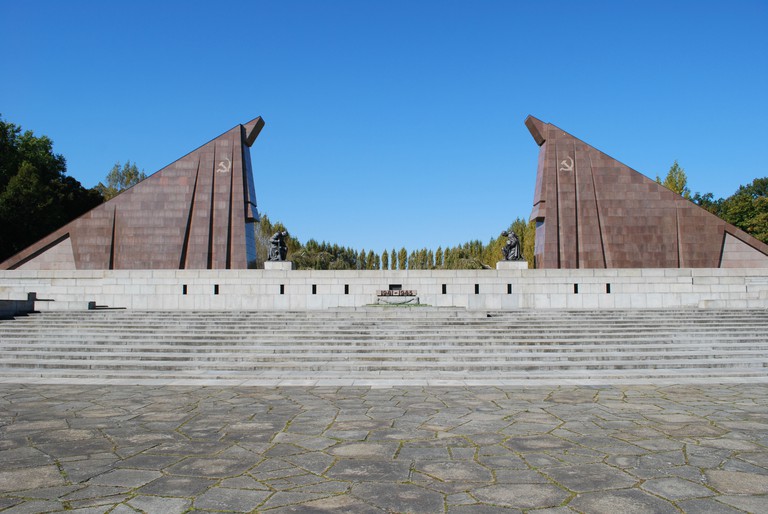 Soviet War Memorial is a massive military cemetery in Berlin’s Treptower Park, and one of the three Soviet memorials in the city. It is the final resting place of 7,000 of the 80,000 Soviet soldiers who were martyred while fighting to capture Berlin in April-May 1945. The memorial was inaugurated four years after the end of the Second World War. The highlight of the memorial is a a 12 meter (3.2 ft) tall sculpture of a soldier holding a sword and a child, erected in honor of Sergeant of Guards Nikolai Masalov who had risked his life to rescue a little German girl.

The Reichstag, constructed in 1894, was the seat of the German Parliament from 1871 to 1918. It is among the most historically significant sites in Germany. On 27 February 1933, the building fell victim to arson, prompting the Nazis to arrest random communists and increase police security throughout the country. On 23 March 1933, the Reichstag surrendered its powers to Hitler, following which the building was heavily used for Nazi propaganda. During the Second World War, it was used for military purposes. It suffered heavy damage during the war, being identified by the Russian army as a major Nazi symbol. The historic photo, Raising a flag over the Reichstag, depicts Meliton Kantaria and Mikhail Yegorov raising the flag of the Soviet Union on the roof of the Reichstag building, symbolizing the victory of USSR over Germany. The Reichstag was also the venue for the official German Reunification ceremony in 1990.