Where To Get Good Sushi In Berlin

Finding good sushi can be pretty difficult in Berlin. The fact that the city doesn’t border any large body of water means that the freshness of the seafood found here can often suffer. Fear not though, there are a number of places that do it right and give you all the freshness and quality in their preparation and ingredients that you’re looking for. Here’s our guide to some of the best, crisp and authentic sushi, Japanese specialties and Asian fusion cuisine in Berlin.
Sushi at Mikoto Prenzlauer Berg © FoodieBerlin

Bar, Japanese, $$$
Sushi at Surf & Sushi | © FoodieBerlin
So good that they made it twice! Mikoto sushi has a reputation for having some of the freshest tasting sushi around. The popular dining spot has two locations — one in Prenzlauer Berg and one in Friedrichshain. Fish here tastes quite fresh, which is nice and not terribly common, as previously mentioned, in a city that is as landlocked as Berlin and, thus, in a sore spot for fresh seafood. Somehow, they manage to get some pretty decent cuts of fish. If you’re looking for a little something extra, Mikoto also has a comprehensive menu that includes traditional Japanese and Vietnamese dishes like pho and don as well as a full bar menu, complete with sake and specialty cocktails. Mikoto really has something for everyone.
More Info
Open In Google Maps
22 Pappelallee, Bezirk Pankow Berlin, Berlin, 10437, Germany
Visit website

Restaurant, Sushi, $$$
Sushi at Onsen | © FoodieBerlin
Surf & Sushi may look like your average run-of-the-mill sushi chain, but it’s so much more than that. First of all, their menu is extensive; there are so many varied options, rolls and menu deals available. Secondly, they are generous with the portion sizes. Their rolls and cuts of fish are larger and thicker than most other sushi restaurants in Berlin. Aside from the traditional ginger and wasabi, they also serve two extra sauces that are both delicious additions to the dishes. You can leave the restaurant satisfied knowing that you got the most bang for your buck. Surf & Sushi also offers other main dishes inspired by modern fused Asian cuisine, especially focusing on foods from Japan and Vietnam.
More Info
Open In Google Maps
17 Oranienburger Straße, Mitte Berlin, Berlin, 10178, Germany
+493028384898
Visit website

Bar, Restaurant, Japanese
Onsen is a little more off the beaten path, a hidden gem if you’d like. Located on the tail-end of the busy and restaurant and bar-heavy Simon-Dach Straße, Onsen offers a little oasis from the hustle and bustle and serves up some tasty food too. Onsen takes inspiration from multiple Asian cuisines and flavors, everything from Thai to Japanese, for their sushi and more substantial (read carbohydrates and meat) main dishes like Udon noodle soups and traditional Thai curries. Located in the trendy neighborhood of Friedrichshain also means that Onsen naturally offers special dishes and rolls for vegans!
Looks like it's closed Hours or services may be impacted due to Covid-19
More Info
Open In Google Maps
Berlin, Germany

Bar, Restaurant, Sushi, $$$
Sushi at Miyabi Mitte | © FoodieBerlin
Izumi is an award-winning restaurant right in the middle of the touristy area around Friedrichshain and one of the most successful and popular sushi restaurants in Berlin. The nigiri (fish served over rice) and sashimi is cut thick, and the rolls are also above the average size.
More Info
Open In Google Maps
66 Kronenstraße, Mitte Berlin, Berlin, 10117, Germany
+493020649938
Visit website

Miyabi Sushi serves a classic sushi menu with all the tradition rolls and cuts. Their menu is extensive and covers flavors from every type of Asian cuisine: Yaki-tori, Woks, pho and various curries. Their lunch menu is much shorter than the dinner option, but offers the sushi dishes at almost half the price. 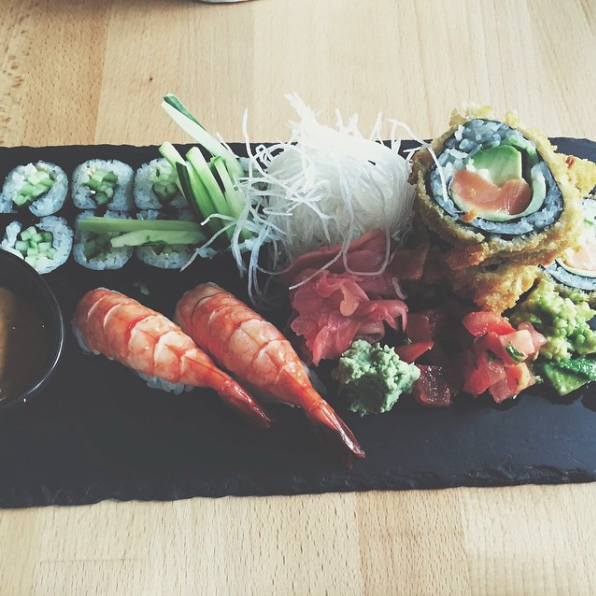 Restaurant, Asian, $$$
Sushi at DUDU | © FoodieBerlin
Cơm Á is an upscale restaurant with a menu boasting tastes from every corner of Asia. There’s Japanese sushi, main grill dishes from Vietnam and Cambodian salads. Keep an eye out for their special beef sushi roll; it’s not traditional (sushi is predominantly vegetables and seafood) but it is one of their best sellers.
More Info
Open In Google Maps
191 Oranienstraße, Bezirk Friedrichshain-Kreuzberg Berlin, Berlin, 10999, Germany
+493091512659
Visit website

Ishin has made a name for itself as the home of fine Japanese dining in Berlin. As a deli and restaurant, diners are treated to some of the freshest fish in the city, including a bi-weekly delivery of tuna fish. The menu is made up of more than 60 types of fish and seafood and a smattering of vegetarian options too. With five locations in Berlin, Ishin is convenient for most Berliners with a craving for sushi and Japanese delights.