The Best Swimming Pools In Berlin 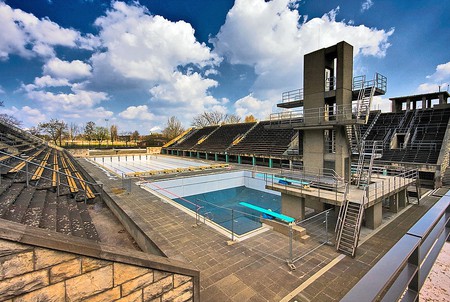 Berlin summers are known for their long stints of stifling heat. Any Berliner would agree that the only way to combat the heat is to find a spot by the waterside and stay there. When a trek to one of the city’s surrounding lakes feels like too much, these pools are here to cool you. 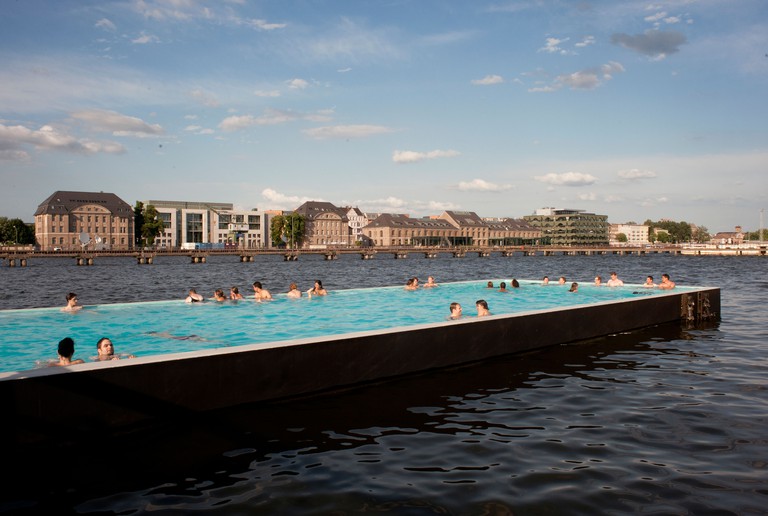 The Badeschiff floating public swimming pool began as an art installation | © Gaia Vittoria Marturano / Alamy Stock Photo
There really isn’t a swim spot that’s more ‘Berlin’ than Badeschiff, in that the people behind the pool decided to infuse it with techno music and clubby vibes. Here, visitors can take a dip in the water situated right inside the Spree where they can also catch views of some of Berlin’s most famous sights, including the TV Tower, Molecule Man, and Oberbaumbrücke. The local Berliner’s favorite time to take a dip? In the morning to conclude a night spent clubbing. Good thing Badeschiff is also located within biking distance from many of the city’s most popular nightlife spots.
Open In Google Maps
4 Eichenstraße, Bezirk Friedrichshain-Kreuzberg Berlin, Berlin, 12435, Germany
+491625451374
Visit Website
Give us feedback

When it’s time to catch a break from the fast paced, 24-hour Berlin lifestyle, many people opt to catch a bit of R&R at one of the city’s many affordable spas. Liquidrom, at the very western edge of Kreuzberg, offers the perfect escape. This pool is filled with warm salt water, meaning that guests can simply lie on their backs and float beneath the cupola ceiling. To create an atmospheric effect inside the hall, soothing sounds and music play from the speakers and a series of changing colored lights fluctuate beneath the water’s surface. Liquidrom truly presents the opportunity to temporarily release yourself from time and space.

Outtake of a shooting for @Michelin. Liquidrom thermal bath inside. #Berlin #berlinstagram_outtakes

Hotel Adlon is probably the ritziest place in all of Berlin, so it would only make sense that its pool would follow suit. Designed much like the thermal baths of ancient Rome, this ethereal pool is clad in mosaic tiling and surrounded with columns interspersed with beautiful wall décor. Next to the pool itself, there is a hot tub and a bar. Not to mention, just around the corner there is a Eucalyptus-infused steam room, Finnish sauna, and relaxation area. Of course, the price for non-guests to enjoy these facilities for the day is quite pricey, around $73, but the experience is truly unforgettable.

While the first three pools on our list are each quite elaborate in their own captivating ways, sometimes we all just want to take a casual dip with friends or get a quick workout in at the spur of the moment. For these purposes, let us suggest the centrally located Schwimmhalle Fischerinsel. Here, guests can enjoy time in the 25-meter pool located in this spacious swim hall for around $4. Schwimmhalle Fischerinsel also offers swim lessons for people of all ages and swim levels, and there is a dry sauna located in the premises. 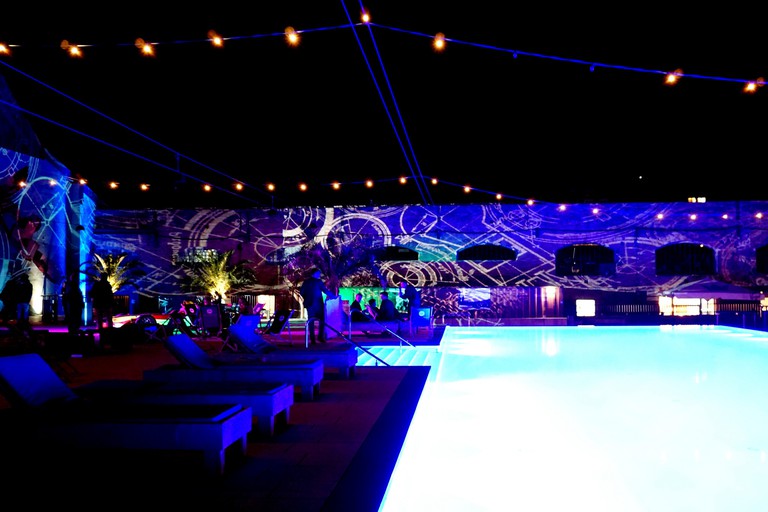 Haubentaucher at night | © Berlin IckLiebeDir / Flickr
Situated within the same RAW building complex as Urban Spree, Suicide Circus, and Neu Heimat, Haubentaucher is one of Berlin’s hippest swim spots. Enclosed within the walls of an old brick railway station, the pool area has everything a person could want from a day spent poolside. In addition to the pool itself, Haubentaucher also has plenty of space for sunning on the surrounding patio. Plus, there are even large swaths of sand for hanging out, along with a bar and a good sound system. Haubentaucher is somewhat of a hidden gem that’s mostly popular with the locals, so there is still space to make this your new haunt.
Open In Google Maps
99 Revaler Straße, Bezirk Friedrichshain-Kreuzberg Berlin, Berlin, 10245, Germany
+4930297766770
Visit Website
Give us feedback

Stadium, Swimming Pool
Facebook
Email
Twitter
Pinterest
Copy link
Share
Map View
Another outdoor pool worth experiencing at least once is Sommerbad Olympiastadion. As its name dictates, this spot is situated within Berlin’s massive, historic Olympic Stadium at the western edge of the city, which was constructed for the infamous 1936 summer Olympics. This enormous pool is stretched across 50 meters and has a diving tower containing springboards fixed up to 10 meters above the water’s surface. For non-swimmers and young children, there are also shallow wading pools at the far end of the main one. On either side of the pool there are also large spectator stands, which function as a reminder of its original purpose.
Open In Google Maps
3 Olympischer Platz, Bezirk Charlottenburg-Wilmersdorf Berlin, Berlin, 14053, Germany
+493066631152
Visit Website
Give us feedback

Swimming Pool
Facebook
Email
Twitter
Pinterest
Copy link
Share
Map View
Stadtbad Neukölln is a truly magical place. First built in 1914, its period décor and architectural style create an ambiance similar to the thermal baths found in Eastern Europe, comprised of labyrinthine corridors, travertine pillars, arched ceilings, and gorgeous patterned tiling. In this way, Stadtbad Neukölln allows people to take a mini vacay to a different time and place. Plus, this place features a 25-meter swimming pool along with a sauna and areas equipped for more leisurely bathing. This pool is no doubt Berlin’s most beautiful pool, and 1000s frequent it on the daily.
Open In Google Maps
3 Ganghoferstraße, Bezirk Neukölln Berlin, Berlin, 12043, Germany
+49306824980
Visit Website
Give us feedback
Give us feedback