10 Iconic German Films You Should Watch 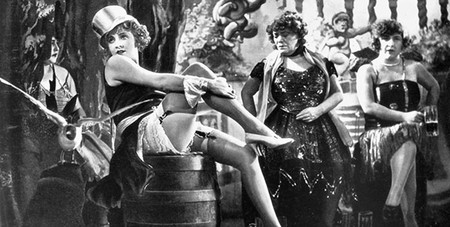 Marlene Dietrich in 'The Blue Angel' - the most famous still in movie history. © UFA/Paramount Pictures

The cataclysms of the 20th century disturbed the visual fabric and moral integrity of German film more radically than that of any other national cinema. It plummeted from the heights of 1920s Expressionism to the nadir of Leni Riefenstahl’s Nazi documentaries and the anti-Semitic screed Jud Süss. It then revived as the New German Cinema (1966-1982) succeeded the French nouvelle vague and the Czech New Wave as the epicentre of European arthouse filmmaking.

The rich tapestry of German cinema is not easily reduced to a thread of 10 iconic movies. On another day our list might have included films directed by Paul Leni, F.W. Murnau, G.W. Pabst, Volker Schlöndorff, Wim Wenders, Rainer Werner Fassbinder, Margarethe von Trotte, or Christian Petzold, but the indisputable classics we’ve selected comprise a cross-section of the best.

Marlene Dietrich was nearly 30 and had appeared in some 18 films when the Austrian-American director Josef von Sternberg, invited to Berlin to direct Germany’s first full-length talkie, cast her in 1930’s The Blue Angel. Dietrich’s portrayal of the seductive Weimar nightclub singer Lola Lola not only established her legend but modernized the femme fatale archetype: the slinky enchantresses of 1940s film noir owe their existence to her as much as they do to hard-boiled fiction. Sternberg’s film, adapted from Heinrich Mann’s 1905 novel Professor Unrat, depicts the willful self-destruction of the aging schoolmaster (Emil Jannings) enslaved by Lola Lola’s languid eroticism. The film is not only a lacerating allegory about bourgeois hypocrisy, but in the professor’s class of odious boys contains the seeds of the Hitler Youth.

Set in East Berlin in 1989, Wolfgang Becker’s social satire Good Bye Lenin! (2003) centers on single mother Christiane, her teenage son Alex, and his sister Ariane, herself a young mother. Ardent socialist Christiane collapses after watching a newscast that shows Alex being arrested for participating in an anti-government protest. By the time she wakes from a coma eight months later, the Berlin Wall has fallen and the ways of capitalism are flooding the east. To protect her from suffering a second heart attack that would likely prove fatal, the kids weave a web of lies to maintain the illusion that Communism has survived. As well as restoring dreary decor in their apartment, Alex is forced to become a propagandist for the “good old days” of food shortages and numbing state television broadcasts.

Wolfgang Petersen’s 1981 World War II classic intimately depicts – from the perspective of a war correspondent (Herbert Grönemeyer) – the grueling existence of a German U-boat crew under the command of a cynical captain (Jurgen Prochnow). The men weather bombardments, a prolonged storm, and long spells of boredom in the submarine’s claustrophobic interior. Some of them are horrified by the fatal burnings they inflict on the crew of a British tanker. The film was based on the 1973 anti-war novel by Lothar-Günther Buchheim, who had himself served as a correspondent on a U-boat. Though impressed by the film’s technical achievement, he criticised it as a Hollywood-style action thriller and nationalistic glorification of war.

Pristinely filmed in black and white, Michael Haneke’s 2009 Palme d’Or-winner chillingly unearths the roots of evil in a remote German village on the cusp of World War I. An elderly teacher (Christian Friedel) recalls in his narration a series of vicious acts that sprang from a well of festering malice to harm some of the weakest locals. He further recounts how the secular and religious leaders lorded it over the women, children, and peasant farmers, using humiliation and terror to keep them in line. The title refers to the emblem of shame that the corrupt martinet pastor (Burghart Klaussner) ties to his kids’ arms when they break his rules. It is a forerunner of the yellow Star of David patches that the Nazis forced Jews to wear after 1939.

Uli Edel’s harrowing 1981 drama is based on musician Christiane Felscherinow’s ghost-written autobiography Christiane F. – Wir Kinder vom Bahnhof Zoo (We Children of Bahnhof Zoo). The book was culled from interviews with Felscherinow in which she recalled her life amid Berlin’s teen junkie culture between 1975 and 1978. The film follows Felscherinow (played by 14-year-old Natja Brunckhorst) as she spirals from her neglected childhood to prostitution after becoming a heroin addict. The evocation of the sordid area at the rear of the Bahnhof Zoo railway station is especially grim. David Bowie, who appears as himself in a concert scene and recorded the soundtrack, took Felscherinow to the film’s premiere.

Fritz Lang’s psychological drama M (1931), which he wrote with his wife Thea von Harbou, was inspired by the serial killings perpetrated by Peter Kürten in and around Düsseldorf in 1929 and 1930. It stars Peter Lorre, hitherto best known as a comedy actor, as the child murderer Hans Beckert, who is eventually caught and tried before a kangaroo court. Lorre’s miraculous performance made the tormented Beckert pitiable, if not sympathetic. Ostensibly a tale warning mothers not to neglect their children, the film more convincingly expresses Lang’s growing disenchantment with Germany’s social and moral malaise on the eve of the Nazis’ assumption of power. Lang’s inventive first talkie uses sound as an important leitmotif throughout. It was his personal favourite of the movies he directed.

Werner Herzog’s 1977 Stroszek, a despairing comedy laden with pathos, follows the fortunes of three social outcasts: the drunken street performer Bruno (Bruno S.), the prostitute Eva (Eva Mattes), and Bruno’s eccentric elderly neighbour Scheitz (Clemens Scheitz). After experiencing harassment in Berlin, they try to start their lives anew by settling in a desolate part of Wisconsin. Their hopes are short-lived. After Bruno and Eva’s money runs out, the bank repossesses their trailer. Eva deserts Bruno, who partners with Scheitz in robbing a barber shop. Bruno’s vain pursuit of the American Dream leaves him holding a frozen turkey, but the film is moving in its despondency. In 1980, Joy Division singer Ian Curtis added to its legend by hanging himself after watching it on TV just before the band was to have embarked on its first American tour.

First-time writer-director Florian Henckel von Donnersmark’s tragic The Lives of Others (2006) lays bare the extent to which East German citizens were spied on by the Stasi (the secret police). In 1984, Stasi agent Captain Gerd Wiesler (Ulrich Mühe) bugs the apartment of a famous playwright, Georg Dreyman (Sebastian Koch), who has written an anonymous article deploring the high rate of suicide in the country. Wiesler gradually realizes that he’s been asked to watch and incriminate Dreyman because the culture minister lusts after Dreyman’s actress girlfriend (Martina Gedeck). Wiesler’s disillusionment with the totalitarian ethos, which humanizes him, mirrors the growing resistance to Communism. Mühe had himself been monitored by the Stasi. He died at 54 shortly after his formidable performance helped The Lives of Others win the Best Foreign Language Film Oscar.

The Cabinet of Dr. Caligari

German Expressionist cinema reached its zenith with Robert Wiene’s 1920 psychological horror movie, truly the stuff of nightmares. The narrator-protagonist Francis (Friedrich Feher) recalls how his fiancée Jane (Lil Dagover) was abducted by the somnambulist Cesare (Conrad Veidt), who had been hypnotised by the murderous fairground showman of the title (Werner Krauss). After Cesare had abandoned the girl, he led Francis to the asylum run apparently by Dr. Caligari himself – in which Francis, Cesare, and Jane are all inmates. The film’s famously distorted, angular sets reflect not only the mad doctor’s psyche, but that of Germany itself during and after World War I. Cesare symbolizes the German soldiers who had been sent by the state to conduct slaughter by remote control.

Fritz Lang’s 1927 silent epic is another masterpiece of German Expressionism and the key film in the evolution of science-fiction film as a tool of social criticism. Based by Lang and von Harbou on the latter’s story, it explores the aimless monotony of citizens’ lives in a futuristic dystopia that reduces individuals to the means of production, as well as the class war waged by the greedy owners on the oppressed workers. Gustav Fröhlich plays Freder, the son of the capitalist master of the city Metropolis. Brigitte Helm plays both Maria, the poor labor activist Freder loves, and the anarchic robot forged in her likeness to discredit the workers’ cause. Lang’s stupendous sets were influenced by the Bauhaus and Cubist movements. The Art Deco buildings originated in his first impressions of Manhattan.