Ladies of the Haus: Forgotten Female Pioneers of the Modern Movement 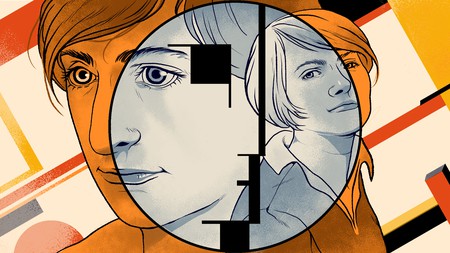 Women have long been written out of the Bauhaus narrative, with the success of Germany’s world-famous Modern art school typically attributed to a handful of celebrated men. To mark the centenary of the institution’s opening, art historians are shining a spotlight on the pioneering creatives who unpicked the prejudices in the industry and shaped the course of design. 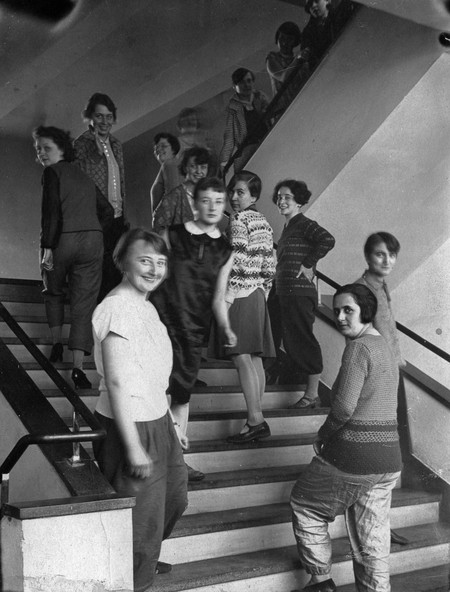 The Bauhaus in Weimar, Germany, promised exciting things for female students who were looking to break the mould – the school was to be the model for equality and progress in education. The school’s founder, Walter Gropius, enrolled 84 women and 79 men when it opened in 1919, declaring there should be “no difference between the beautiful and the strong sex”. Rather than their artistic tutelage being limited to the home, German women finally had the chance to pursue their passions in a professional capacity.

Despite Gropius’s grand gesture, these ‘new women’ with freshly cut bobs and fierce ambition encountered the same old prejudices. Concerned that the Bauhaus wouldn’t be taken seriously with its influx of female students, Gropius swiftly relegated women to the weaving room. Only 11 female students managed to override the school’s decision to prevent women from working in the more ‘challenging’ fields of metalwork and architecture. 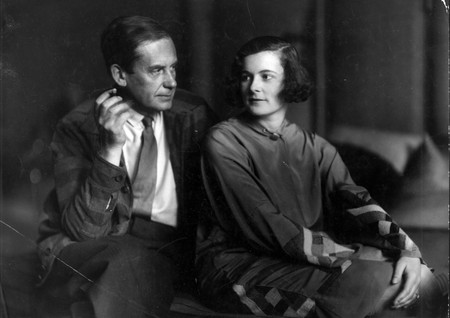 The school’s founder, Walter Gropius (seen here with his wife, Ise, in 1929), admitted an almost equal number of men and women when it opened in 1919 | © Historic New England / Courtesy of Bloomsbury Publishing

Modernism became a male-only club, with the likes of Ludwig Mies van der Rohe, Marcel Breuer and Gropius defining the Bauhaus style. Architecture dominated as the ultimate goal of Bauhaus under Gropius’s lead, and so it followed that the men did too, while the art produced by women was dismissed as ‘feminine’ or ‘handicrafts’. As a result, women were marginalised at Bauhaus and beyond, struggling to establish the careers they set out to achieve.

However, despite Gropius’s confinement of women to arts deemed more domestic, the female Bauhauslers created an artistic legacy, producing some of the school’s most commercially successful collaborations during its 14-year existence. The Bauhaus’s only female master, Gunta Stölzl, transformed the unpopular weaving school into one of the most prosperous departments, reaching a level of productivity previously unseen at the Bauhaus. 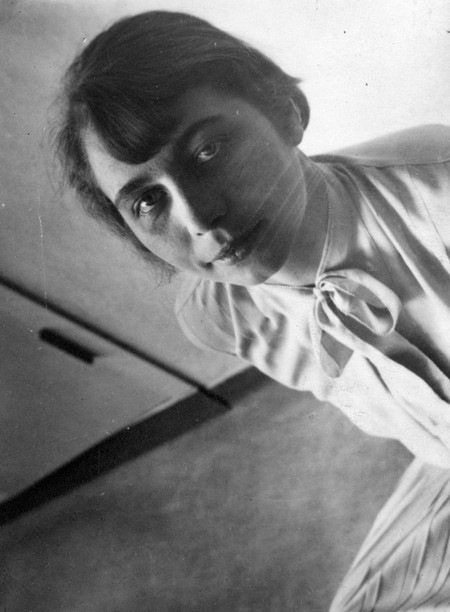 “[Stölzl] paved the way for a series of weavers and textile designers who went on to achieve international success,” write Elizabeth Otto and Patrick Rössler in Bauhaus Women: A Global Perspective (2019). “She elevated improvisation and experimentation … and consistently motivated her students to grab hold of the ‘rope of industriousness’ with team spirit and passion.”

One of the workshop’s most prolific designers, Anni Albers, initially branded weaving as “sissy”, but found herself at the loom rather than studying painting as she’d hoped when she joined in 1922. She went on to become one of Stölzl’s most successful students. 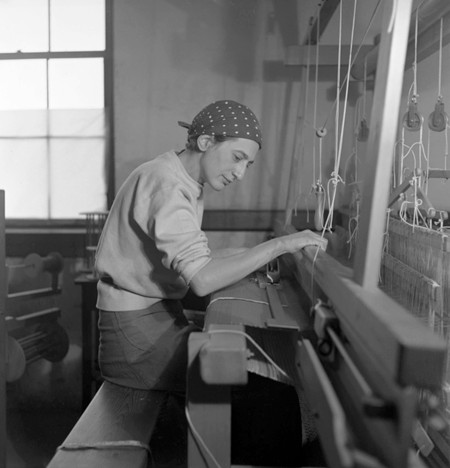 Albers said that “gradually threads caught [her] imagination”, and she incorporated painterly qualities into her textile work, influenced by the work of her husband, Josef Albers, and teacher Paul Klee. Her groundbreaking art displayed a distinctive vocabulary of symmetrical motifs and abstract patterns, juxtaposing natural yarns and synthetic fibres in a new way. One of her most fruitful designs was a commission for the auditorium of a German Trade Union school – an innovative two-sided fabric that absorbed sound on one side and reflected light on the other.

While weaving was inevitably a central focus for the women of the school, it wasn’t the only area in which they excelled. Margarete Heymann-Loebenstein was admitted to the ceramics workshop on a trial basis after the masters noticed her talent. She was taken under the wing of Gertrud Grunow, who famously invited students to ”dance to the colour blue”, encouraging them to engage all their senses when working with a material. Influenced by Grunow, Heymann-Loebenstein’s pottery took on a unique, playful style that deviated from the linear and geometric aesthetics that came to define the Bauhaus movement.

However, her provisional time in the workshop ended as the male leaders remained unconvinced she belonged in their domain.

After some years away from the school, Heymann-Loebenstein set up Haël ceramics factory in partnership with her husband, Gustav Loebenstein. Haël’s smart branding and great design under her creative vision wooed critics and consumers. At its peak in the early 1930s, the factory had more than 120 staff and Heymann-Loebenstein’s products brought the Modern vernacular to the masses – something many of her male counterparts failed to achieve, instead creating costly prototypes that were often never produced. 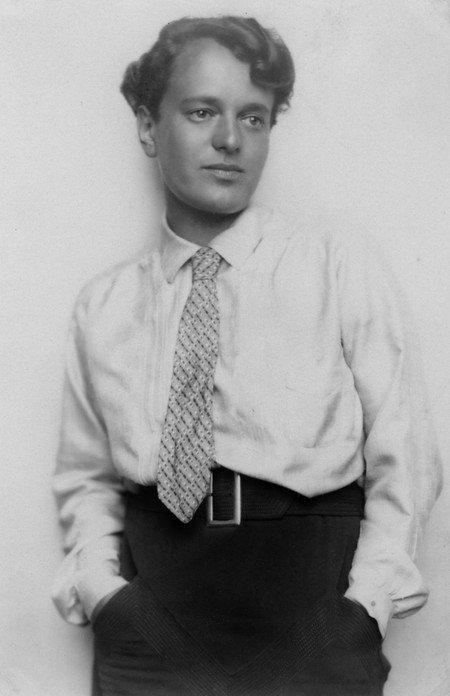 Despite the relative success of women like Heymann-Loebenstein, Stölzl and Albers, these male-dominated industries were still incredibly hard to break into. Even those who did progress beyond the Bauhaus weren’t fully respected by their male colleagues. Marianne Brandt, for example, one of the rare exceptions who had the good fortune and tenacity to find her way into the metal workshop, felt this keenly throughout her career.

“They expressed their displeasure by giving me all sorts of dull, dreary work,” recalled Brandt. “How many little hemispheres did I most patiently hammer out of brittle new silver, thinking that was the way it had to be and all beginnings are hard.” But it paid off – her beautifully simple geometric silverware made her one of the most commissioned metal artists. She was even appointed head of design in the prestigious Ruppelwerk metal factory in Gotha, one of the first women to accept such a position, but sadly failed to win the respect of the technicians on the floor who were stuck in their conventional, discriminatory ways. 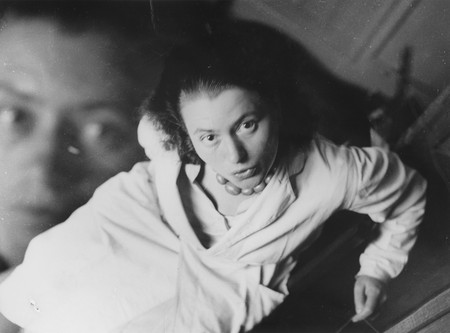 The other issue that both women and men of the school faced was horrific persecution from the Nazis. Many were driven out of Germany to escape the anti-Semitic regime, which deemed anything Modern to be ‘degenerate’. Stölzl, for example, was forced to leave in 1931 after being hounded by Nazi sympathisers within the Bauhaus for marrying Jewish-Palestinian architect Arieh Sharon.

Others followed suit after the Bauhaus was abruptly shut down in 1933 by the Nazis, who accused it of printing anti-Nazi propaganda and having Communist sympathies. The Alberses headed to North Carolina to take over Black Mountain College, which became something of a haven for fellow Bauhauslers.

“Under Nazism it became starkly evident that Bauhaus women … had a significantly more difficult time finding work and safe haven,” write Otto and Rössler in Bauhaus Women. “They were more vulnerable than their male peers no matter how successful they had been during the vibrant interwar years.” 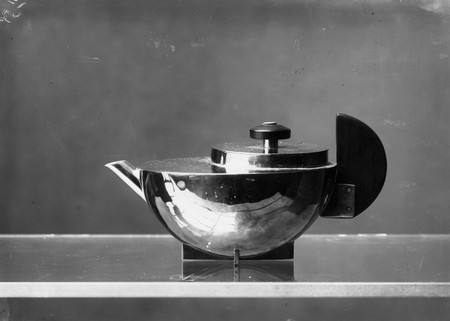 In addition, many of the school’s greatest women were written out of history. They were marginalised not just by the Bauhaus men but also by society. Only recently has there been a rise in appreciation for the Bauhaus’s female collective, with institutions including the Tate Modern celebrating pioneering female figures; the gallery staged a “long overdue recognition of Anni Albers’s pivotal contribution to modern art and design” in the first-ever UK retrospective of her work in 2018.

“Historians and commentators of the era, eager to emphasise Modernism’s love affair with architecture and industrial design, often did so at the expense of other disciplines,” explains Libby Sellers, author of Women Design (2018). “Consequently, many designers working in the fields of textiles, ceramics, toy design, set design and interiors – who were predominantly women – were often overlooked from contemporary accounts. These oversights have created blind spots in both our understanding and interpretation of design. The centenary of the Bauhaus is a wonderful opportunity for all this slight to be redressed.” 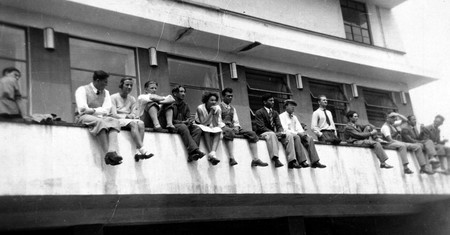 Bauhaus students sit on the balustrade of the canteen terrace in Dessau, circa 1931 | © Stiftung Bauhaus Dessau / Courtesy of Bloomsbury Publishing