What to Know About Kölsch, Cologne's Beloved Dialect 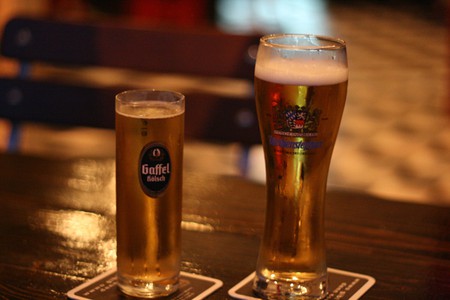 Kölsch, the much beloved dialect of Cologne, is spoken in one way or another by 25% of the city’s population and understood by many more. Unless you are talking with someone’s grandmother or engaging a tradesman, you’re mostly likely to hear Kölsch at Carnival or in the pub. Sound-wise, it’s a sort of slow, Dutchified German. Here’s what you need to know about Kölsch. The game is not so much to build Kölsch words from standard Deutsch but to try and figure out what you might be singing during Carnival.

Right this second – standard German doesn’t have any continuous tenses. I walk means I walk sometimes and I am walking right now, the right now meaning comes from context. Kölners have gotten around this problem by using gerade, which means just. You might hear – Ich gehe gerade zur Bibliotek, for example – I go now to library.

French – Charlemagne was in Cologne for a while and, more recently, Cologne was occupied by the Napolean’s troops from 1794-1815. Some notable words and expressions include parapluie for umbrella, portmonnaie for wallet (money carrier) and plümo for duvet (plume being French for feather).

Kölle Alaaf! – the classic Carnival phrase, shouted by hundreds of thousands of tourists in the street at all hours of the day and night. Kölle is the Kölsch word for Cologne and Alaaf is a contraction of all af or alles ab/weg, which means everything gone. A perfectly sensible thing to shout during the massive party in the days before Lenten fasting begins.

Et es wie et es – it is how it is – in standard German: Es ist wie est ist. This is the foundation of the basic Cologne life philosophy and one of the basic 13 Rules of Cologne Life. Whatever happens, there’s not much to be done about it, so we may as well have a beer and a laugh.

As with any language learning, the best thing to do is listen, listen, listen. Learn a little bit more with Konrad Adenauer, Cologne native and former Chancellor of Germany.