Top 10 Things to See and Do in Augsburg, Germany

Augsburg is only half an hour’s drive west of Munich and a fantastic destination for a day trip. The city wows with a 2000-year-long history and not only is it one of Germany’s oldest cities, but it also holds several Rococo and Renaissance masterpieces that can still be visited today. Here’s our list of the top 10 things to see and do in Ausburg.

In 1521, the renowned merchant Jakob Fugger created the social housing complex which today is the world’s oldest still in use. 140 flats are spread across the 67 buildings of the picturesque enclave and, with its church and administrative buildings, forms somewhat of a village in its own merit. The rules and conditions have not changed in the nearly 500 years of its operation. Inhabitants are in need but debt-free and of the Catholic faith. In return, they pay no more than €0,88 in rent a year – yes, 88 cents – and are required to pray for the salvation of the benefactor family three times a day. A small onsite museum recounts the history of the complex with a film, texts and exhibits. 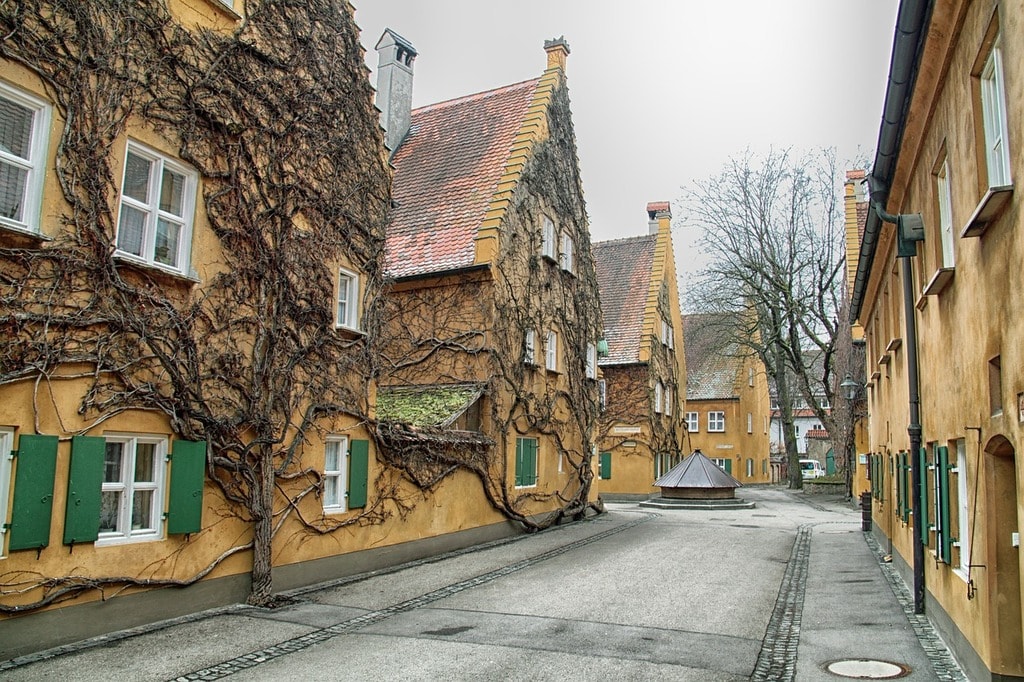 The construction of Augsburg’s cathedral began in the 11th century, though archaeological excavations unearthed the foundations of a 4th-century church on the site in 1978. Considering that Augsburg is one of Germany’s oldest cities and was an important Roman provincial capital, the find was not surprising. Today’s cathedral was built in a Romanesque style, but Gothic elements were added later. Some of the highlights are the 11th-century bronze door, the figurative stained glass windows and paintings by Hans Holbein.

More swank and splendour await at the ‘golden hall’ of Augsburg’s town hall. The grand room has its origin in the Renaissance period and is one of the most impressive examples of the era. The interior almost blinds visitors with the sprawling gold elements that clad the walls and ceiling, alongside the detailed murals and frescoes. Other notable elements include the vaulted ceiling and marble columns in the Lower Fletz and the panelled walls and wood-carved furniture of the four Prince’s Rooms. 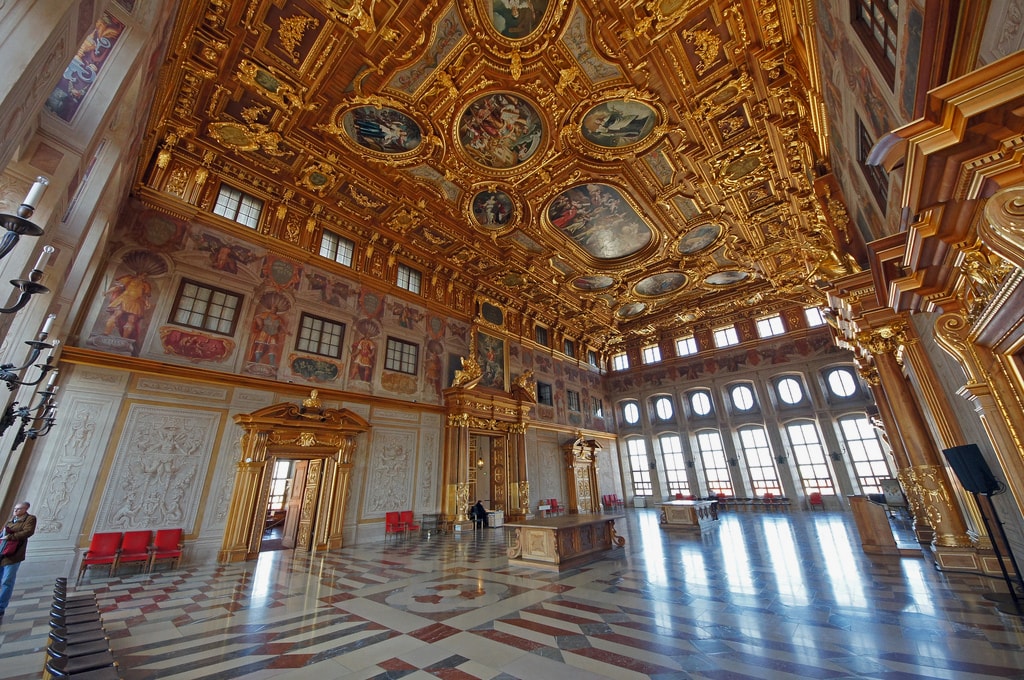 The 70-metre-high tower punctuates the sky of Augsburg’s city centre and, together with the adjacent town hall, forms Augsburg’s most prominent landmark. When it was built in the 10th century, the Perlachturm stood only half as tall and served as a watchtower. Over the centuries, the tower was gradually heightened. The onion-shaped roof and the figure of the Suebian goddess were added in the early 17th century. If you decide to climb the 261 steps all the way to the top, you’ll be rewarded with panoramic views of the city.

The Schaezlerpalais palace houses several art collections, including Albrecht Dürer’s famous portrait of Jakob Fugger. But the absolute highlight is the ballroom, which is widely considered a masterpiece of Rococo architecture. The opulent interior is composed of large mirrors, stucco elements, gold ornaments, wood carvings and an impressive ceiling fresco which depicts the four then-known continents. To round off your visit, spend some time strolling around the palace gardens, parks and courtyards. 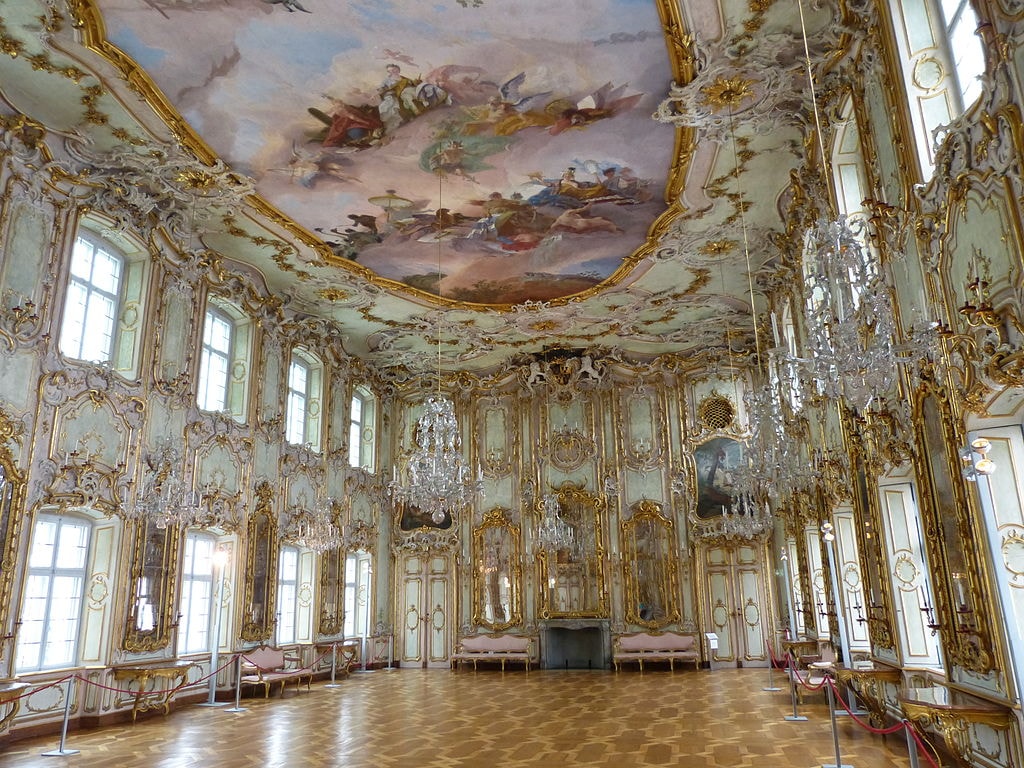 When the 1972 Summer Olympics in Munich rolled on, the Augsburg Eiskanal made the news as the world’s first artificially-created whitewater river. It was the venue of the kayak slalom and canoeing events and has since been hosting numerous championships. The stream flows through a green part of Augsburg, great for an afternoon stroll. Swimming here is incredibly dangerous and prohibited in most regions, so do your research in advance if you want to go for a dip.

One thing often associated with Augsburg is the Augsburger Puppenkiste. The famous marionette theatre shot to fame when its productions started to be broadcast on German television in the 1950s. Past performances include all kinds of fairy-tales and children’s stories from Hansel and Gretel and Sleeping Beauty to Aladdin and the Wizard of Oz. 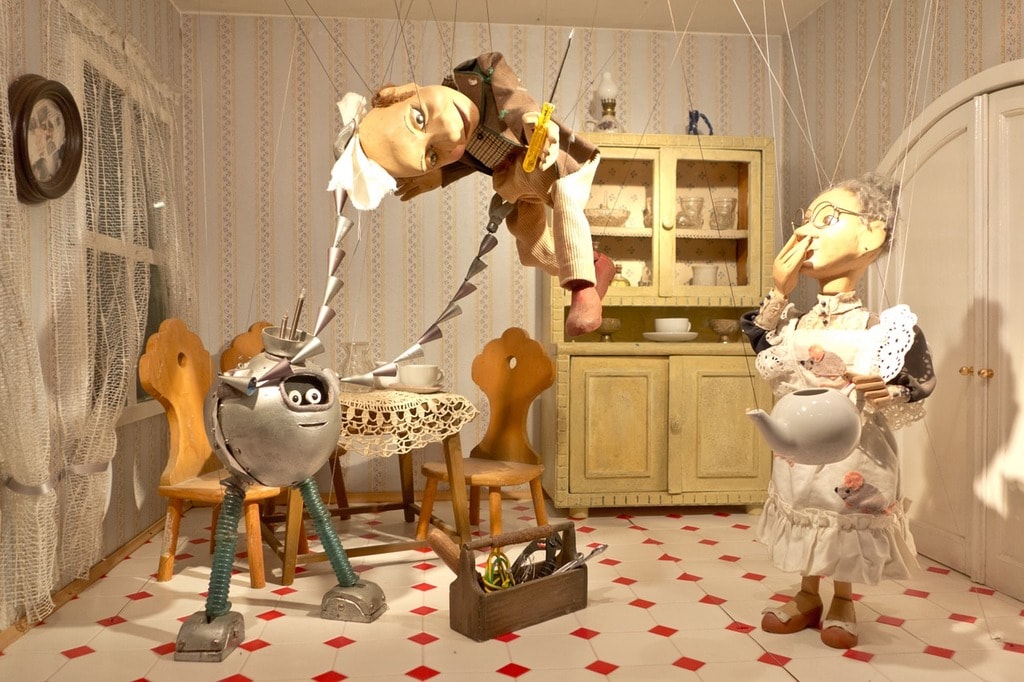 The famous German poet and playwright Bertolt Brecht was born in Augsburg in 1998. To mark his 100th birthday, a museum dedicated to the life and works of the late writer opened in his birthplace. Though Brecht only spent a couple of years at this address before he and his family moved across town, city officials agreed that the house in the Lech quarter was more symbolic. The collection encompasses pictures, video installations and audio files as well as some first edition of Brecht’s writings.

Walking or driving up and town the centrally-located Maximilianstraße is like travelling through the ages. Back in 15 BC, the Via Claudia Augusta was established to connect the Roman settlement with Italy and grew to be one of the most important trade routes of the time. With Gothic, Renaissance, Rococo, neo-classicist and post-war buildings that seam the road, Maximilianstraße is considered a notable example of art history. 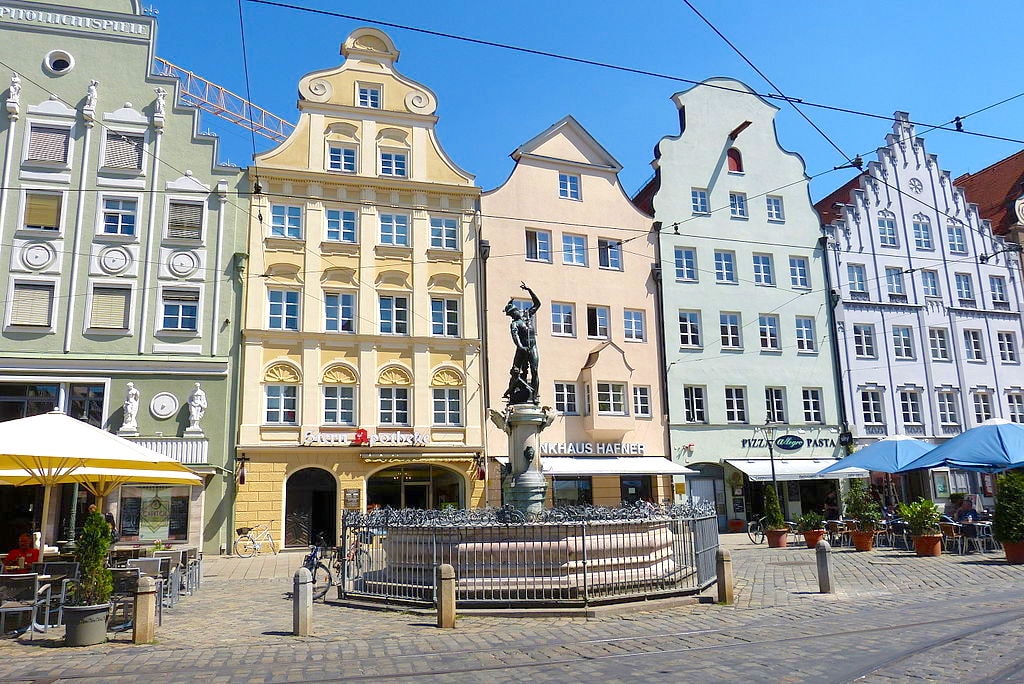 You don’t need to travel to Prague or Salzburg to gain insight into the life of one of the world’s most famous composers. Ludwig Mozart, the father of Wolfgang Amadeus Mozart, was born in Augsburg in 1719 and being a composer and music teacher himself, discovered his son’s talent early on and continued to manage him throughout his career. The museum displays books, handwritten letters, musical instruments and multiple audio files that lead through the exhibition.