The World's Biggest Boat Party: What to Do at Kieler Woche 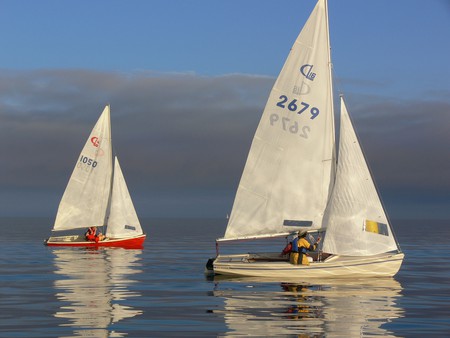 Every June since 1882, thousands of sail boats and tall ships have descended on Kiel, a city in the north of Germany, for Kieler Woche, the largest sailing event in the world. The city has a long maritime history, protected as it is from the ravages of the North Sea by Denmark and the bottom part of Sweden. But as with most stories involving the sea, it’s not always been smooth sailing. Trading made Kiel rich, but in 1518, the city was kicked out of the Hanseatic League, after 400 years of membership, for harbouring pirates. There are fewer pirates to be seen in the marina these days, but there’s still plenty of fun to be had. Here’s our guide on what to do at Kieler Woche.

During Kieler Woche, 4,000 sailors from all over the world race 800 boats in over 50 classes, ranging from tiny single-sailor dinghies to te massive yachts. Some races are against the clock around a course, but the most exciting ones take place with two boats going head to head. Most of the races are difficult or impossible to see from the shore, but there are plenty of screens set up around town, with chairs and beer close at hand.

It’s not just sleek, modern craft that get their week in the spotlight. More than 100 windjammers and other traditional craft are also moored in the firth waiting to take part in the windjammer parade on the second Saturday of the week.

For those who feel that it’s not really a ship unless there’s a gun attached, the destroyers, frigates, corvettes and minesweepers from several countries hang out at the mouth of the Nord Ostsee Kanal in Tirpitz Harbour for the meeting of navy fleets. Navy cutter regattas take place in the inner firth.

There are many things to do at Kieler Woche, aside from watching hundreds of boats tacking and jibing around the firth. The many music stages around town host concerts from bands representing all genres of music, and the Kiel opera house, theatres and dance companies all have shows on. Most of the stages can be found at the Kiellinie, the Germania harbour and the Hörn area, as well as in the city centre around Rathausplatz and Holstenbrücke.

Boats are cool, but so is the Spiellinie at the Krusenkoppel, Germany’s biggest cultural children’s attraction. It’s a huge kids’ wonderland, with a full slate of activities for children of all ages along with ample space to run, tumble, hammer and explore. Oh, and a pirate ship.

Stilt artists, comedians, clowns, magicians, fire-breathers, acrobats and pantomimes perform all around the city and in the harbour. Some put on organised shows at museums and galleries, and others just wander about performing as the spirit moves them.

If thousands of ships weren’t enough, Kieler Woche happens at the same time as the Internationalen Willer Balloon Sail, which takes place on the Nordmarksportfeld. More than 70 balloon teams from all over Europe come together to create nightly show complete with lasers, fireworks and choreography.