The Top 10 Things to See and Do in Worms and Speyer, Germany

Speyer Cathedral | © Harro52/Wikimedia Commons
Worms and Speyer are only a 40-minute drive apart and can be easily combined into one trip: both cities rank among Germany’s oldest and boast some fascinating sites dating from the early Roman settlement to modern times. From awe-inspiring churches to exciting museum exhibitions and medieval sites, these are the top 10 things to do in Worms and Speyer.

Cathedral
Speyer Cathedral | © Harro52/Wikimedia Commons
The imposing red sandstone facade and the four green-shingled towers of Speyer Cathedral are quite a sight, and the cathedral’s history is just as gripping. Construction began under Conrad II in the 11th century and over time, the cathedral was reshaped and expanded, all while preserving its Romanesque features. Today, it’s the world’s largest remaining Romanesque Cathedral. Pope Pius XI awarded it the honorary title of Basilica minor in 1925 and in 1981, UNESCO made it a World Heritage Site.
More Info
Open In Google Maps
Domplatz, Speyer, Rheinland-Pfalz, 67346, Germany
+4962321020
View menu
Visit website
Visit Facebook page
Send an Email
Give us feedback

Museum
If there’s one thing usually associated with Worms, it’s the Nibelung saga. The renowned medieval epic poem Song of the Nibelungs, which revolves around the dragon slayer Siegfried, is set in and around Worms and tells of love, death and vengefulness. The museum occupies two towers of Worms’ ancient city walls and is equipped with audio guides. Visitors can delve into Nibelung’s origin, reception and motifs.
More Info
Open In Google Maps
10 Fischerpförtchen, Worms, Rheinland-Pfalz, 67547, Germany
+4962418534120
View menu
Visit website
Visit Facebook page
Send an Email
Give us feedback

Museum
Technic Museum | © Pxhere
For technology enthusiasts, this museum is a can’t-miss attraction. With 150,000 square metres (almost 1,614,600 square feet) of indoor and outdoor space, the Technic Museum boasts a jaw-dropping collection of everything from submarines and jumbo jets to a Chinese steam locomotive. In 2008, the museum added Europe’s largest space exhibition with the prototype of the Soviet/Russian space shuttle, Buran. And, the best part of the Technic? You can explore most of the transportation vehicles from the inside as well.
More Info
Open In Google Maps
1 Am Technik Museum, Speyer, Rheinland-Pfalz, 67346, Germany
+49623267080
View menu
Visit website
Visit Facebook page
Send an Email
Give us feedback

Historical Museum of the Palatinate

Museum
If you want to learn more about the history of the Palatinate, this museum should go on your list. Five sections will guide you through the cultural history of Speyer and the surrounding region. You’ll also learn about the life of the first humans who settled there and about the arrival of the Romans in 12 BC, the Germanic looting, ecclesial treasures, Martin Luther and the Protestant revolution, the region’s 2,000-year long history of winemaking and a lot more.
More Info
Open In Google Maps
4 Domplatz, Speyer, Rheinland-Pfalz, 67346, Germany
+496232620222
View menu
Visit website
Visit Facebook page
Send an Email
Give us feedback

Once serving as Speyer’s western city gate, the so-called Altpörtel is the most notable remnant of the city’s medieval fortification. Even when compared to other town gates in Germany, the Old Gate stands out with its soaring height of 55 metres (180 feet) and its well-preserved structure. A closer look will reveal a couple of interesting details: each of the tower’s eastern and western sides show two clocks and the northern side features an iron bar that was once called the ‘Calibration Shoe of Speyer’, which was used as a measuring unit until the early 19th century. 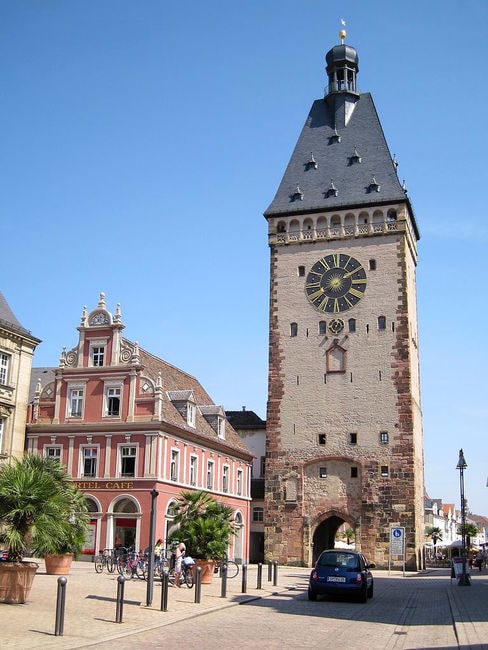 In the Middle Ages, Speyer was home to one of Germany’s most important Jewish communities. The remains of a men’s and women’s synagogue, along with the Mikveh (a ritual bath), are the oldest and among the most important Jewish sites in Germany and northern Europe. The ruins date back to the early 1100s, but the underground section of the Mikveh has survived the past centuries and is virtually unchanged. Visitors can climb down the vaulted stairwell into the bathrooms that lie 10 metres (33 feet) underground.

Worms’ cathedral is perched on the city’s highest hill, safe from the floodings that used to trouble the area. Just like its counterpart in Speyer, the Worms Imperial Cathedral was also honoured with the Basilica minor title in 1925, but is smaller and about 100 years younger. The main construction phase of the Romanesque church stretched from 1130 through to 1181 and not much has changed since. In the summer, the cathedral serves as the backdrop for the annual Nibelung Festival when a programme of concerts, lectures and debates celebrate the renowned saga. 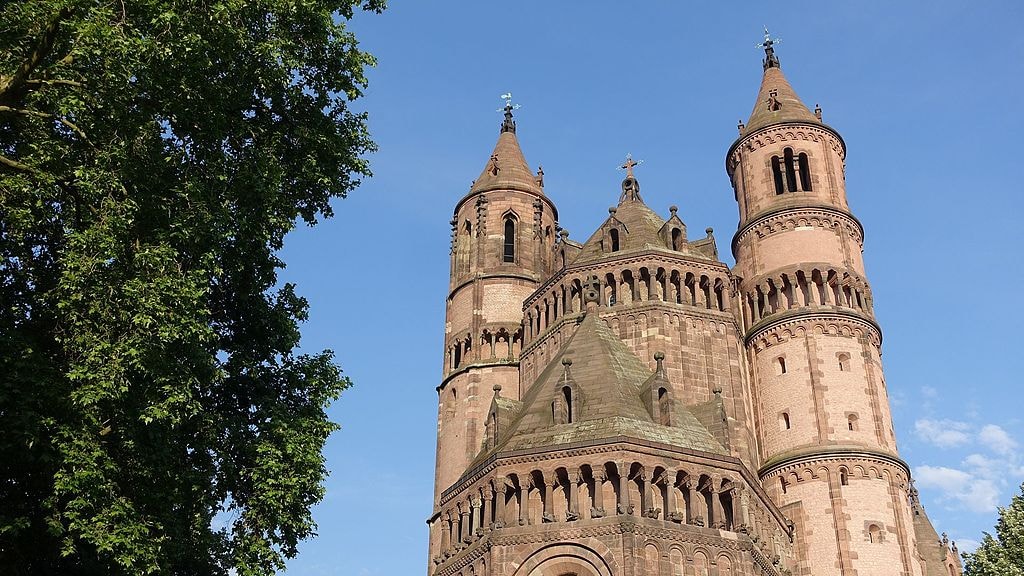 Church
Speyer’s Memorial Church boasts the highest tower—100 metres (330 feet)—in the entire Palatinate region and was built to commemorate a landmark event in the history of the Protestant confession. In 1529, six princes and official representatives of the Imperial Free Cities protested the ban of Martin Luther and his revolutionary teachings. Statues of the father of Protestantism and his supporters can be found inside. Another highlight is the colourfully stained glass window of the apse, a gift by the German Emperor Wilhelm II.
More Info
Open In Google Maps
1 Martin-Luther-King-Weg, Speyer, Rheinland-Pfalz, 67346, Germany
+4962322890077
View menu
Visit website
Visit Facebook page
Send an Email
Give us feedback

Church
Art in the Trinity Church | © Eva Kurila/Wikimedia Commons
Architecture fans are in for another treat—and another church. Speyer’s Trinity Church, built in 1701 in the Baroque and ecclesiastical style, is the city’s oldest Protestant church with an interior that survived all the quarrels and wars since its construction. The church’s interior features dark wood adorned with intricate carvings, a biblical dome fresco and an altar built in 1716.
More Info
Open In Google Maps
3A Große Himmelsgasse, Speyer, Rheinland-Pfalz, 67346, Germany
+496232640618
View menu
Visit website
Visit Facebook page
Send an Email
Give us feedback

The region around Worms and Speyer is not only known for its award-winning wines, but also for its regional specialities like Pfälzer Saumagen or Handkäse mit Musik (a handmade cheese made of sour milk). The cute and cosy Rabennest winery in Speyer’s city centre is an excellent place to dive into the culinary world of the Palatinate and sample some of the fantastic wines the region has to offer.