The Radical Poetry Of Ashraf Fayadh 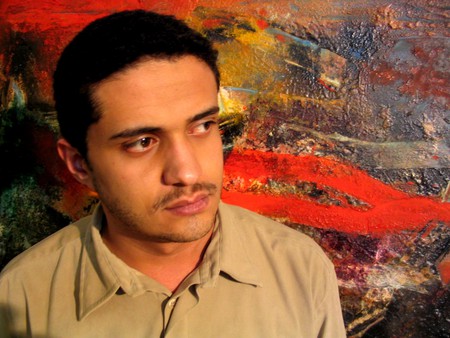 Image courtesy of an unnamed photographer

In January 2016 the International literature festival of Berlin (otherwise known as ilb) called on individuals, institutions, schools, and media outlets to stage a series of literature readings in protest of poet Ashraf Fayadh’s death sentence in Saudi Arabia. Fayadh has been accused of promoting atheism and blasphemy, both charges he has categorically denied since his arrest in 2014.

Image courtesy of an unnamed photographer

Originally sentenced to four years imprisonment and 800 lashes, his sentence was later changed to death following a retrial. On 2 February 2016, the sentence was quashed in a Saudi court, something for which the ilb can credibly claim a significant contribution. Ashraf Fayadh has been sentenced to eight years in prison and 800 lashes as the court upheld the charge of apostasy while overturning the sentence, and he will also be required to renounce his poetry through Saudi Arabia’s official media channels.

The ilb’s campaign has reached 47 countries across the world and attracted literary stars like Irvine Welsh and AL Kennedy. Over 350 writers and numerous PEN Centers have signed the appeal, including Nobel laureates Orhan Pamuk and Mario Vargas Llosa. The appeal was sent to Barack Obama, David Cameron, and to the German foreign ministry.

On January 14th 2016, 128 confirmed readings took place in protest of Ashraf Fayadh’s death sentence. They were organized by PEN centers and other writers associations and organizations as well as individuals. Some of the events were readings with writers, while others included readings of Ashraf Fayadh’s poems both in the Arabic original and other languages as well as other texts and poems relating to the topic. Several readings involved music. Some focused more on a discussion with human rights experts and people involved in the debate. Some were organized as protests — for example, in front of the Saudi Arabian Embassies. Some took place at schools and universities.

Born in Palestine in 1980, Ashraf Fayadh and his family fled the country to Saudi Arabia, although owing to Saudi Arabia’s nationality laws, Fayadh has never been allowed to claim nationality. For many international literature fans and critics, Ashraf Fayadh is among the leading Saudi voices in contemporary literature. He is perhaps most famous for his collection of poems Instructions Within and for his meditation of lost love in Frida Kahlo’s Mustache. Instructions Within was published in 2008 by a Beirut-based publishing house Dar al-Farabi, and was later banned in Saudi Arabia. His works are largely untranslated from the Arabic originals.

Extract from Ashraf Fayadh's Disputed poems from Instructions Within. Translated by Mona Kareem

Fayadh’s connection with European arts and culture runs deep. In 2013, he curated a collection of Saudi art for the Venice Biennale, and became an honorary member of the German chapter of PEN.

The battle to free Fayadh continues. Jo Glanville, the director of English PEN, which joined the fight for his appeal, said: ‘It is a relief that Ashraf Fayadh no longer faces execution, but this is a wholly disproportionate and shocking sentence. It will cause dismay around the world for all Ashraf’s many supporters. The charges against him should have been dropped and he should be a free man today. We will continue to campaign for his release.’