The Most Beautiful Buildings in Düsseldorf

Building
Neuer Zollhof | Neuer Zollhof
Neuer Zollhof, by the Rhine harbor, is probably the most unique component of the modern and redeveloped Düsseldorf skyline. It is made of three buildings designed by American architect Frank O. Gehry. The curving façade of the buildings lend them the look and feel of giant sculptures, while the stainless steel exterior of the middle building reflects the white plaster and red brick façades of the its counterparts. Overall, the Gehry buildings make for an exciting backdrop for holiday photos.
More Info
Open In Google Maps
Neuer Zollhof, Stadtbezirk 3 Düsseldorf, Nordrhein-Westfalen, 40221, Germany
View menu
Visit website
Visit Facebook page
Send an Email
Give us feedback

Ruins
Kaiserpfalz, the ruins of Emperor Friedrich Barbarossa’s ‘Royal Palace’, is an exciting place to explore. The thick historic walls of the palace can be traced back to the 10th century, and even today makes for an impressive sight, complemented by the lush greenery of its surroundings.
More Info
Open In Google Maps
Burgallee, Stadtbezirk 5 Düsseldorf, Nordrhein-Westfalen, 40489, Germany
+4921122973077
View menu
Visit website
Visit Facebook page
Send an Email
Give us feedback

Museum
The elegant Schloss Jägerhof, with a tower and two wings, adorns a corner of one of the most beautiful gardens in the city, Hofgarten. The earliest existence of the castle can be traced back to the mid-18th century. Today, the castle houses the Goethe Museum, displaying a comprehensive collection of artefacts from the life and era of legendary literary figure, Goethe.
More Info
Open In Google Maps
2 Jacobistraße, Stadtbezirk 1 Düsseldorf, Nordrhein-Westfalen, 40211, Germany
+492118996262
View menu
Visit website
Visit Facebook page
Send an Email
Give us feedback

Museum
Schlossturm | © QuidoX/Flickr
This castle tower has stood witness to centuries of history. Its existence as a simpler castle than it is today can be traced back to 1288. As the city of Düsseldorf grew steadily over the following century, the castle came to occupy its position in the heart of the town. In the 16th century, during the era of the dukes of Jülich-Kleve-Berg, it was rebuilt into a splendid three-winged castle with two towers. The following two centuries saw a complete renovation of the interiors in Baroque style. The castle fell victim to French bombing in 1794, a devastating fire in 1872 and an air attack in 1943. Each time, it was rebuilt out of its ashes. Today, the castle tower houses an interesting maritime museum open to the public.
More Info
Open In Google Maps
30 Burgplatz, Stadtbezirk 1 Düsseldorf, Nordrhein-Westfalen, 40213, Germany
+492118994195
View menu
Visit website
Visit Facebook page
Send an Email
Give us feedback

The Rathaus, or City Hall, was built between 1570 and 1573 by architect H. Tussmann, and redesigned and reconstructed over the following centuries. One of the oldest buildings in the city, it stands a proud witness to devastating wars and centuries of history. The gorgeous Renaissance complex, made of unpaved brick walls, consists of five wings and sprawls to the bank of the River Rhine. 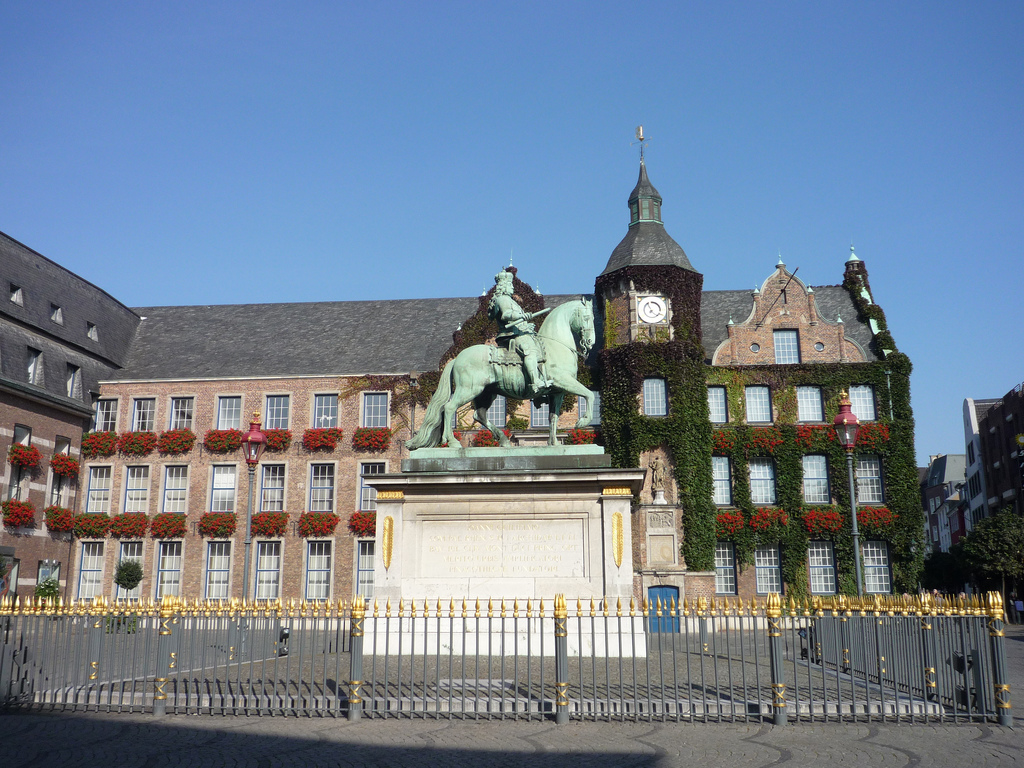 Building of the Regional Government

Home to the president of the regional government of Düsseldorf, this building is a gem of the Düsseldorf skyline. This stunning neo-Baroque style building was constructed in the early 20th century.
Cecilienallee 2, Düsseldorf, Germany

Building, Library, Shopping Mall, Theater
The Carsch Haus, a gorgeous building with a neoclassical sandstone facade and a distinct Art Nouveau influence, is a popular shopping center. The building was heavily damaged during World War II. After its reconstruction, it housed a community college library and later a theater, before being converted to a shopping mall once again. In recent times, the interior has been thoroughly modernized, while the exterior still retains its historic charm.
Looks like it's closed Hours or services may be impacted due to Covid-19
More Info
Open In Google Maps
1 Heinrich-Heine-Platz, Stadtbezirk 1 Düsseldorf, Nordrhein-Westfalen, 40213, Germany
+492112107410
View menu
Visit website
Visit Facebook page
Send an Email
Give us feedback
Give us feedback