The History of Asam Church in One Minute 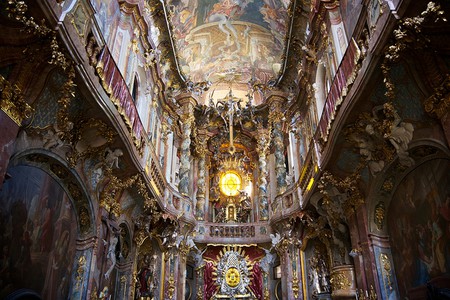 Tucked in between the buildings on Sendlingerstraße in the heart of the shopping district, you’d never expect to find one of the most important late-Baroque buildings in southern Germany. This elaborate personal chapel has a rich history. Built between 1733 and 1746 by two brothers hoping to secure their salvation, they could even see the altar from their neighbouring house.

Egid Quirin Asam was a sculptor and his brother Cosmas was a painter. They used their skills to cover every inch of the 22m by 8m chapel with allegorical paintings and statues intended to bring the youth of Munich back to the right path; despite limited space, there are seven confessional areas. 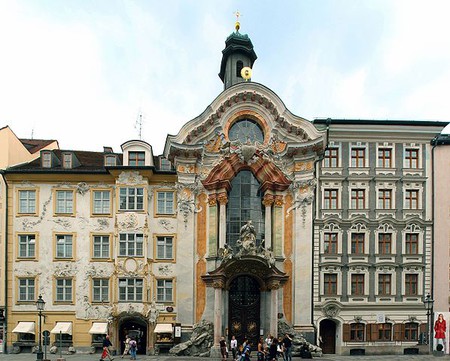 Even the lighting is used to send a message. While the pews are in darkness symbolising suffering on earth, the middle section (mostly in white) was for the Emperor, and the light flooding in from above represents God and the light of heaven. It also illuminates a beautiful ceiling fresco by Cosmas, considered to be one of his finest works. 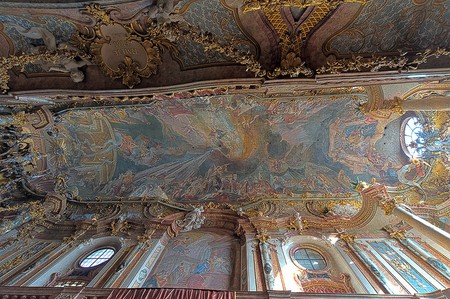 Light is also used carefully in the choir area; hidden windows backlight the three figures of the trinity, so that they appear to glow. This part of the church, however, was badly damaged by a bomb in 1944, so today’s choir area is a 1980s reconstruction of how it might have looked.

Both brothers honed their crafts in Italy, and the altar area stresses the brothers’ Italian links. The four columns framing the altar are a reference to the columns over St. Peter’s grave in Rome. It’s also said to contain a relic of St. John of Nepomuk to whom the chapel is dedicated.

There are different views as to why the brothers chose St. John of Nepomuk. Though his role as Protector of Bavaria may have been enough, some think it was because the foundation stone was laid on his saint’s day. Others trace the dedication back to a stormy journey where the brothers were transporting valuable sculptures by river and prayed to John of Nepomuk for protection.

Though the brothers intended to keep the church for personal use, reluctance from the neighbours meant they were forced to promise it would open to the public. Sadly, neither brother lived to see the church’s inauguration in 1746.

Nowadays, tourists can visit the church for free, but are only able to access the lobby area; the main body of the building is gated except for services. Through the wrought iron gates, however, you can easily see and admire the many sculptures and attempt to take in all the artistic nuances of this incredibly ornate church.