© bri-klenner/Pixabay
From delectable foods and adorable locally-made toys, to historic figurines and irresistible stationery, each of these items are deeply rooted in the city’s identity. Acting as gifts or personal indulgences, these souvenirs are sure to peak anyone’s interest. Read on to discover the best places to pick them up in Nuremberg.

Nuremberg is known for an astounding variety of mustards, locally produced across big and small mills throughout the city. Arguably the best place to buy mustard is Der Senftladen, which spoils costumers with around 230 locally-made varieties, each with their own unique blend of spices. 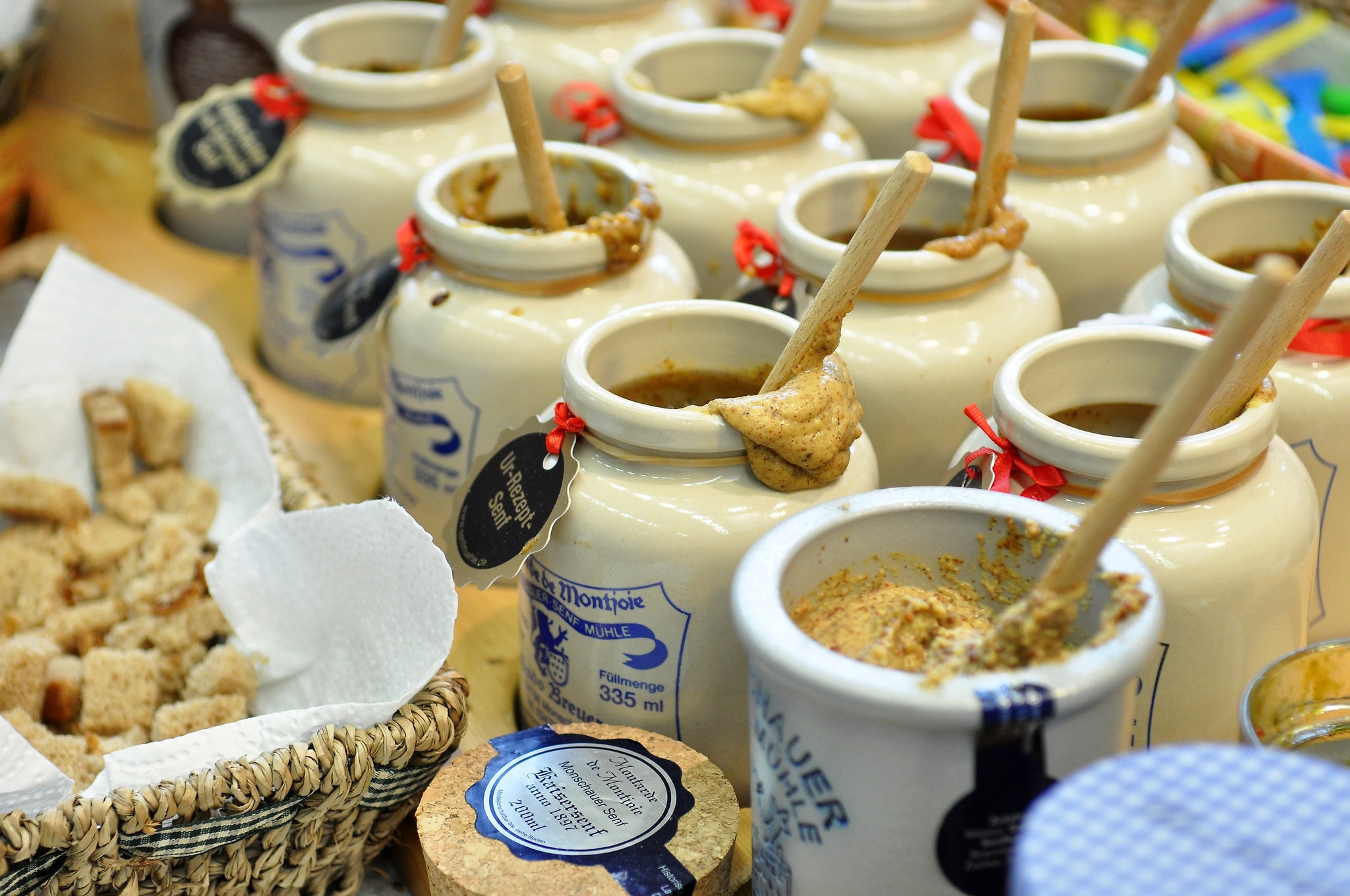 Nuremberg Christmas Market is a treasure-trove of Christmas decorations, with the usual ornaments jostling for space with traditional, regional German decorations from all corners of the country. Käthe Wohlfahrt, the internationally-reputed Christmas ornament specialist from Rothenburg ob der Tauber, has a magical store in Nuremberg that basks in Christmas cheer all year long. The quaint shop is chock full of Christmas figurines, pyramids, smokers, and a wealth of other Christmas gifts. 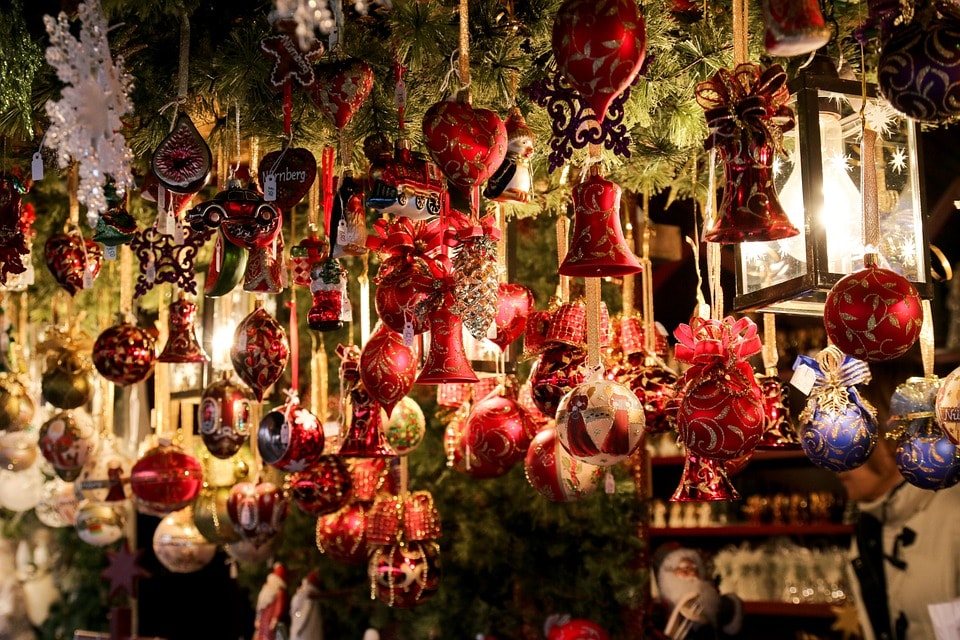 Franconian lebkuchen (gingerbread) has been delighting taste-buds since the 13th century. Nuremberg lebkuchen, a harmony of ginger, cloves, cinnamon, flour, and lots of nuts, has a unique flavor that is not found anywhere else in the world. Lebkuchen Schmidt is the perfect place to try this melt-in-your-mouth delectable, but also consider gifting their lebkuchen, as it comes in a gift box that’ll impress the recipient almost as much as the lebkuchen itself. 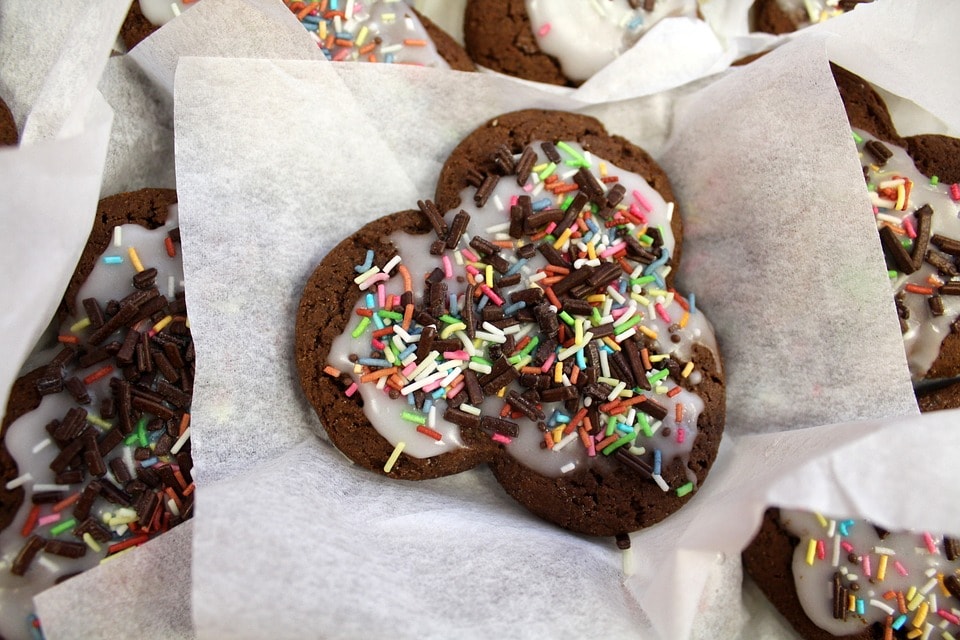 Purchasing a Nuremberg prune man (Zwetschgenmännle) means taking home a little bit of Nuremberg itself. Legend has it that a poor man had nothing to give his children for Christmas, so he improvised with a bit of wire and prunes from a tree in his backyard. A prune man’s structure is made up of wire and birchwood, while a smooth walnut acts as the head; the arms and legs are made of dried prunes and the body is made of figs – altogether an immensely labor-intensive and time-consuming process. These adorable figurines are between 9 cm and 22 cm in height, and are available as a few different hundred avatars: waiters, doctors, chimney-sweeps, loving couples, a dude on bike, and much more. They are the star attraction at the Christmas Market, and can be found year round at Käthe Wohlfahrt. 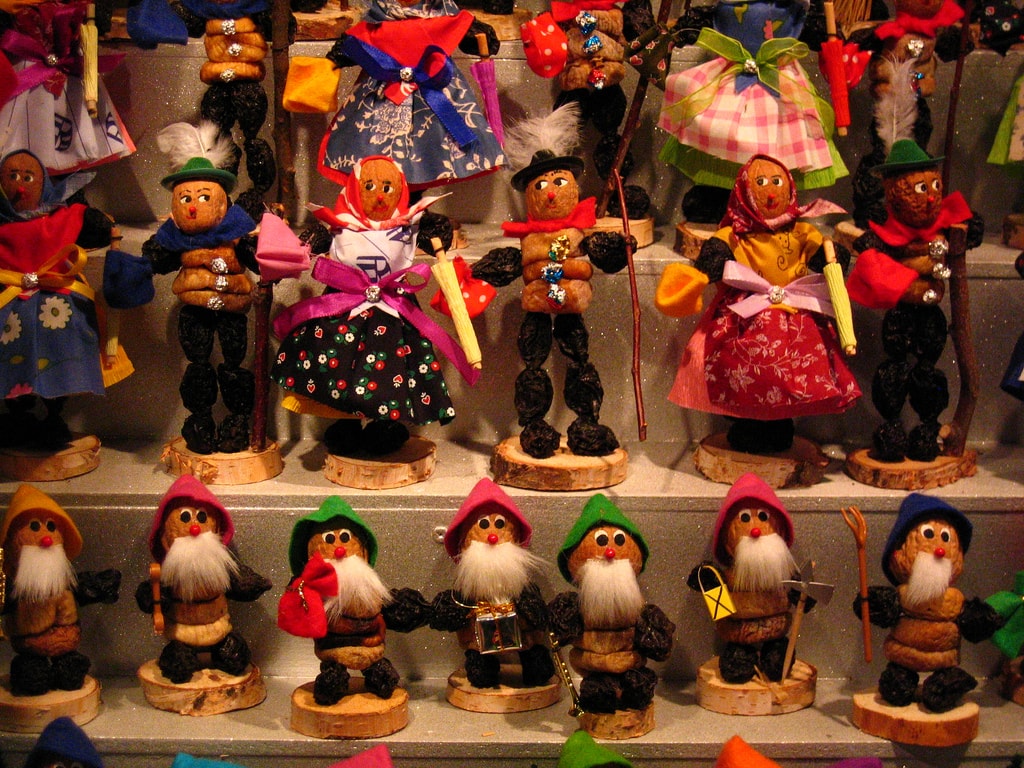 Nuremberg is affectionately known as the Toy City because of its history of toy makers. The Nuremberg Toy Museum shows the city’s love of toys, as does the fact that Nuremberg has hosted the annual International Toy Fair since 1949, the largest of its kind in the world. There’s no better way to commemorate time spent in Nuremberg than by buying a traditional, locally-made toy. Alexander Baier’s Tiny Tin Shop at Handwerkerhof (Craftsmen’s Courtyard) and the workshop of Annegret Frank (next door to Alexander’s) have endless choices on offer. 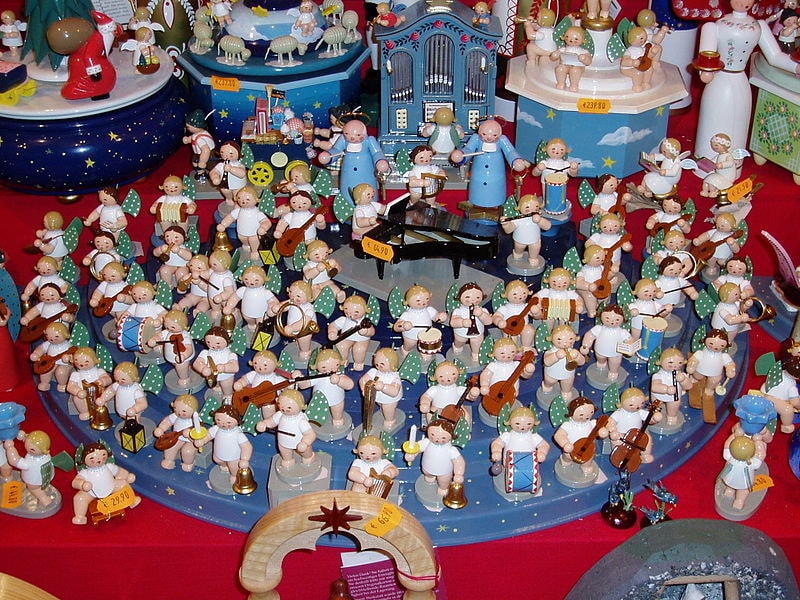 Being in Germany means being close to beer. Like most regions in Germany, Nuremberg also boasts a regional specialty. This should come as no surprise given its proximity to Upper Franconia, which has the highest density of breweries on earth. Hausbrauerei Altstadthof, a craft brewery in Nuremberg’s Old Town, is a perfect place to chill over delectable Franconian cuisine and several kinds of brews, before selecting some beer for the journey home. 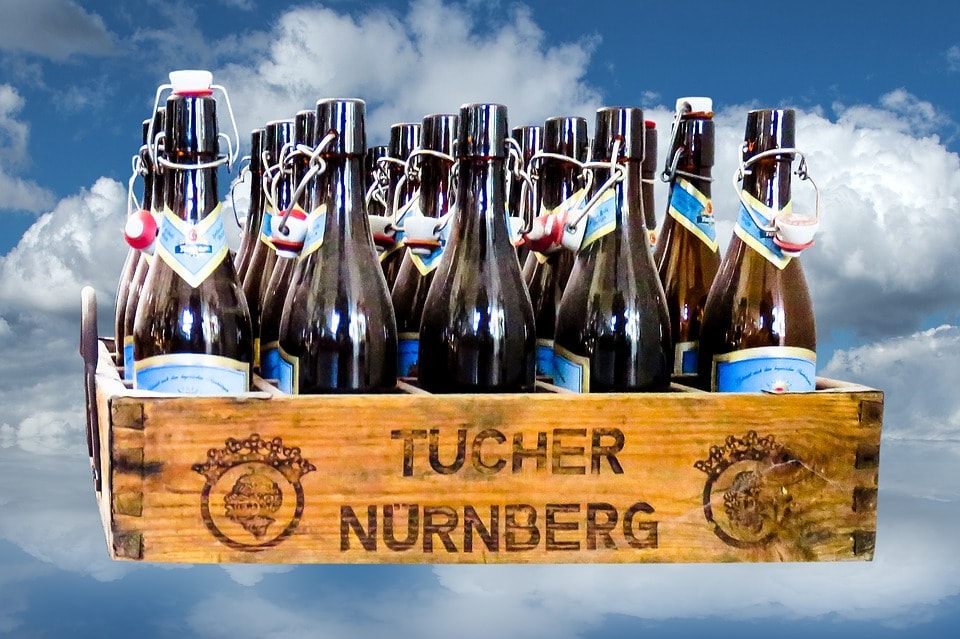 Can’t holiday in Nuremberg without trying one of these ever present bad boys. Available nearly everywhere in Nuremberg, it is now also possible for some to take these home as souvenirs thanks to their Protected Geographical Indication (PGI) status. A small restaurant called Bratwursthausle sells vacuum-packed bratwurst that are perfect souvenirs. Like the bratwurst at any other particular restaurant? Feel free to ask if they sell travel packs. 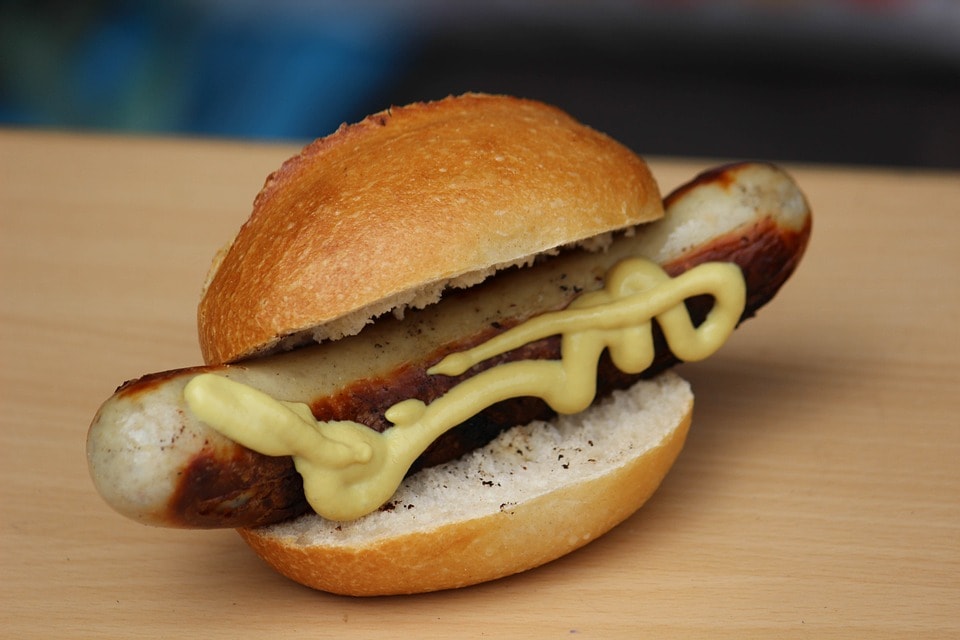 Back in the 17th century, the Germans invented the modern graphite pencils, a more convenient upgrade to their predecessors. Nuremberg, owing to its closeness to graphite mines, played a huge role in the manufacturing process. Staedtler and Faber-Castell are two internationally-famous pencil manufacturing companies located in Nuremberg. Visit the Staedtler flagship store to be amazed by its riotous display of colours. Travel back in time to build a DIY set with a graphite rod, wooden-pencil casings, glue, string and a seal, and write like it’s 1780! 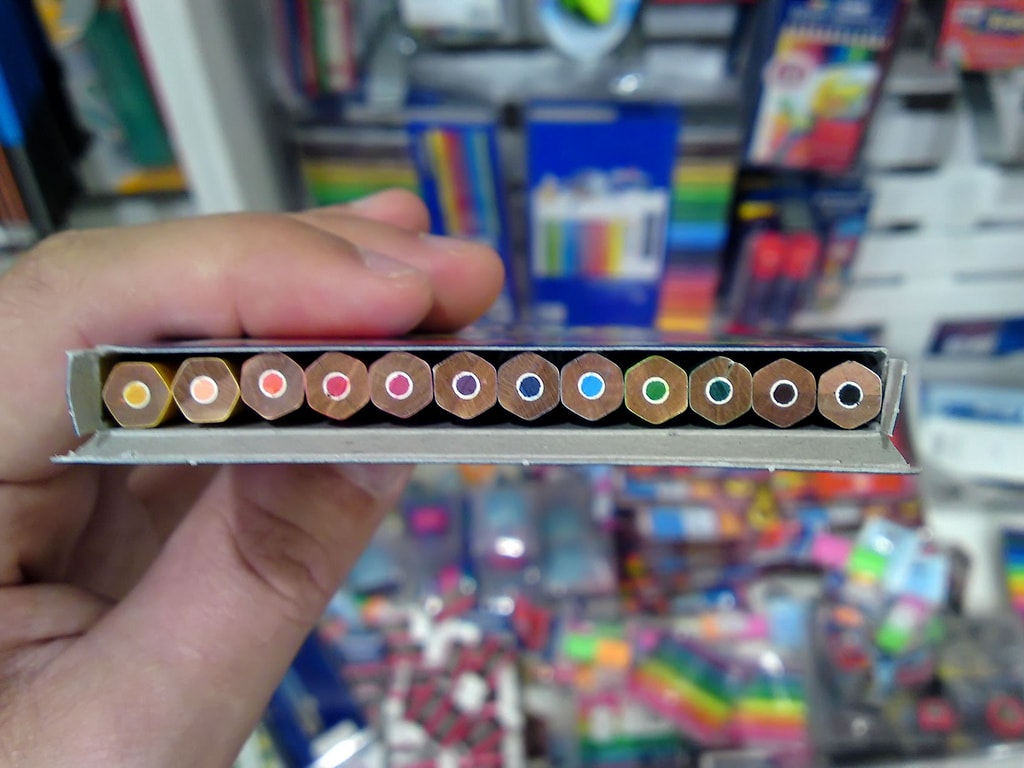