The Best Christmas Markets in Bavaria 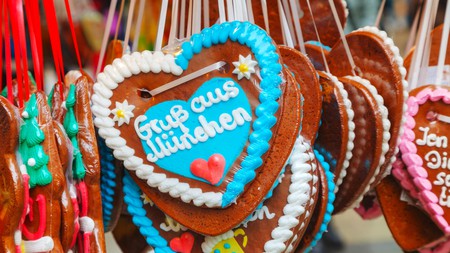 All fairytale castles and snow-topped mountains in the winter, Bavaria, Germany is an easy place to get into the Christmas spirit (once you’ve recovered from Oktoberfest). Here are the best Christmas markets to visit in this state that’s rich in culture and tradition.

Christmas markets, or Christkindlmarkt, originated in Germany in the 15th century, and the southern state of Bavaria offers no shortage of charming options. This landlocked region is known for its fairytale architecture that’s even more spectacular when snow-capped and illuminated with twinkling lights. Here are some favourites guaranteed to get you into the yuletide spirit, with many more not mentioned here, such as the picturesque, lakeside Lindau and Chiemsee. Just follow the scent of roasted almonds and mulled wine. (Note: German markets tend to follow the Catholic Advent calendar, opening from late November until 23 December). 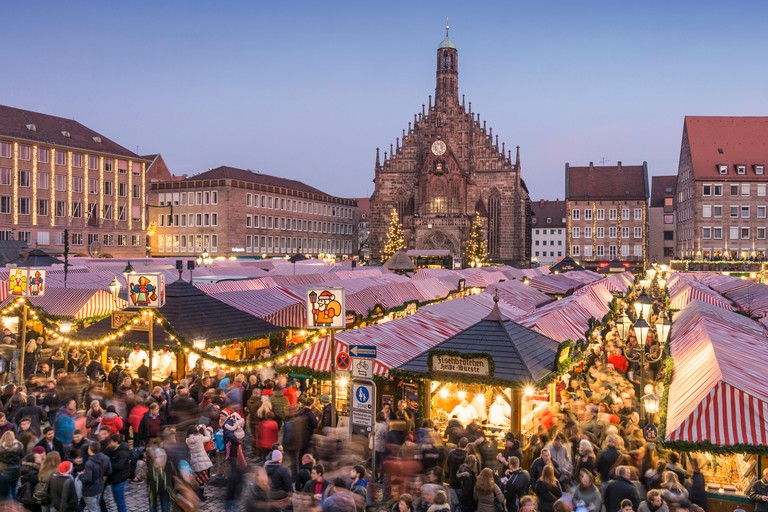 © travelstock44 / Alamy
On the Friday before the first Sunday of Advent, Nuremberg kicks off the Christmas season with an opening ceremony revealing Christkind – the traditional gift-bearer of Germany. The market is actually five markets in one, spread out around the Old Town’s Main Market Square. But the central one is hard to miss, with 180 wooden booths bearing red-and-white roofs that sell traditional food and drink, decorative ornaments and Zwetschgenmännle (figurines made out of prunes). Keep an eye out for the local Lebkuchen gingerbread, made without flour to aid digestion from a recipe that’s tightly guarded and only produced in Nuremberg. This should mean you can fit several in, to fuel your exploration around the different markets on foot or a yellow, horse-led stagecoach. 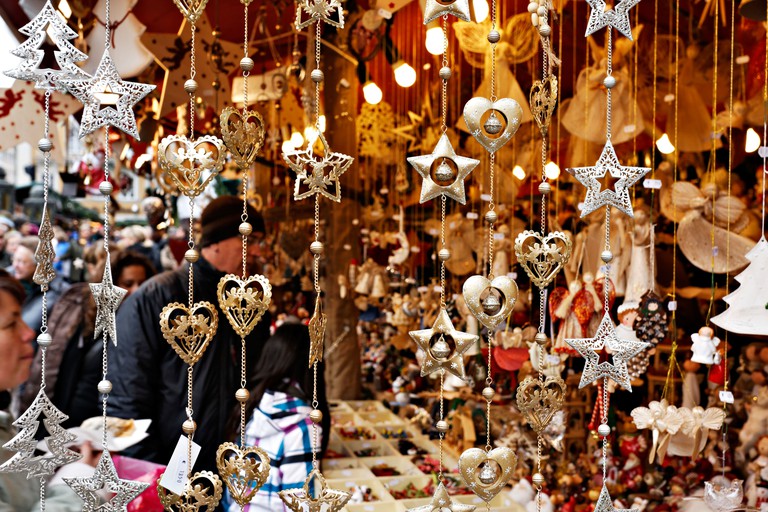 © Paul Mayall Germany / Alamy
The capital of Bavaria has several holiday markets throughout the city, but the original takes place in Marienplatz, the Old Town’s main square. This popular meeting place draws citizens and tourists to marvel at an impressive Christmas tree in front of the Neo-Gothic Town Hall, as well as unique events such as the spooky Krampus Run, which stars Saint Nicholas’s evil twin. You’ll also find daily performances of Bavarian music by choirs and wind instruments; booths laden with Nativity figurines and German gifts; and plenty of mulled wine and culinary delicacies. Guided tours are provided for those interested in learning more about the history of this world-famous market. 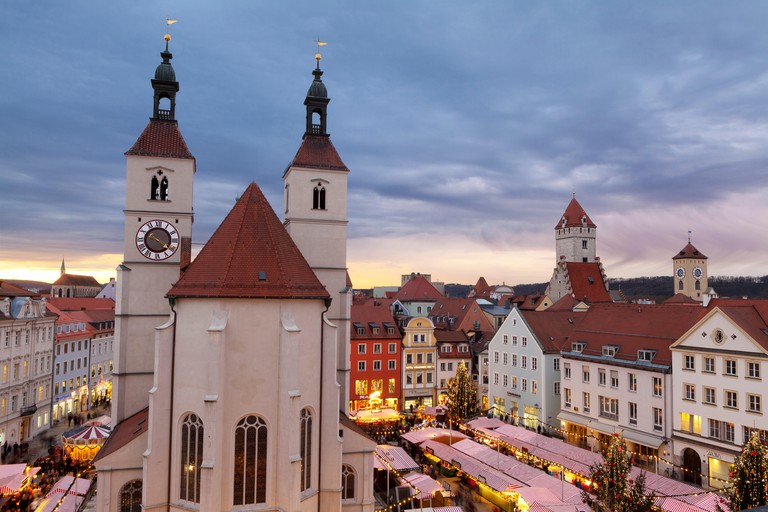 © All Canada Photos / Alamy
Lesser-known Regensburg happens to be one of Germany’s best preserved medieval cities, and it’s easy to get to by train from both Munich and Nuremberg. The city’s compact Old Town is a Unesco World Heritage Site thanks in part to the 12th-century Stone Bridge, crossing the Danube River. Each Advent season, Regensburg hosts four Christmas markets about 20 minutes’ walking distance from each other, but the main one is located on Neupfarrplatz, with a merry-go-round and stands selling marionette dolls and hand-blown glass – as well as an impressive variety of mulled wines. 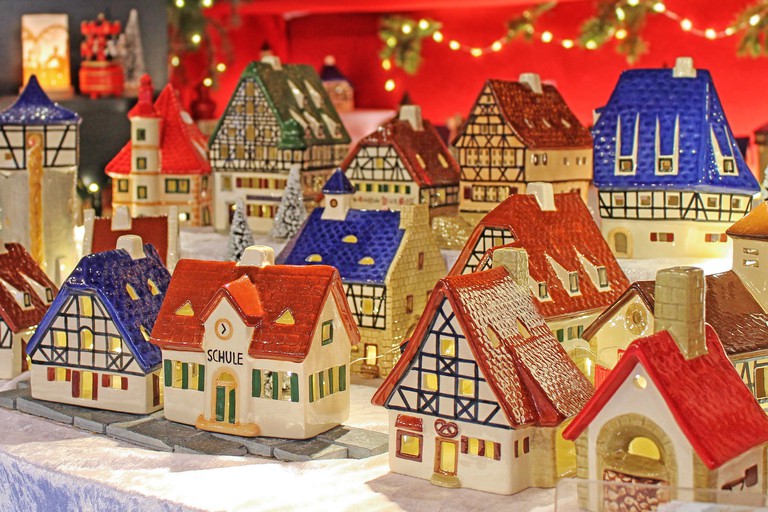 © Sergey Trifonov / Alamy
This Upper Bavarian town along Germany’s Romantic Road is loved for its cobbled lanes and half-timbered houses. It’s also one of only three remaining medieval walled towns in Germany, and it comes to life during the annual Christmas Market, called Reiterlesmarkt. Festive booths wrap around the town’s Christmas Tree, selling the usual assortment of gifts and decorations – though you’ll want to keep an eye out for Schneeballen, a deep-fried pastry covered in powdered sugar that resembles a snowball. The sweet treat comes in many variations including chocolate and marzipan. Or simply order a mug of white mulled wine while enjoying a scene that hasn’t changed much since the Middle Ages. 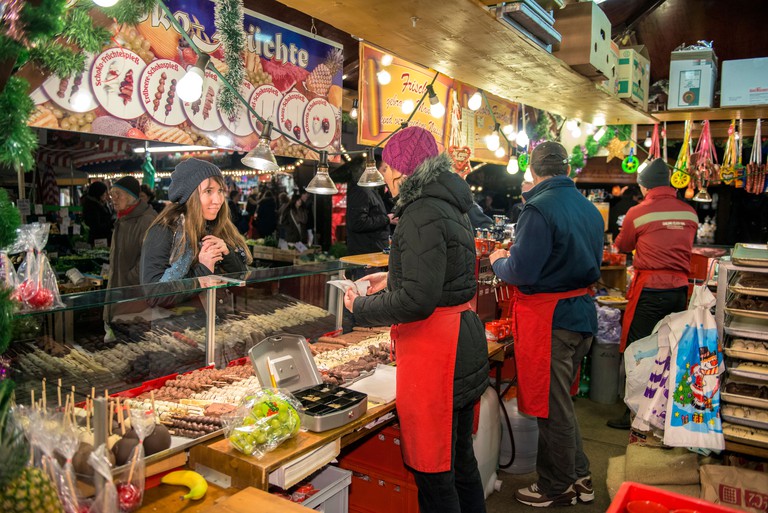 © Danita Delimont / Alamy
Drawing thousands of visitors each year, the college town of Wurzburg offers the perfect backdrop for an annual Christmas market thanks to its exquisite baroque and rococo architecture. In the town hall’s square, visitors will find 100 wooden booths selling artisan wares and crafts, plus quality food and drink options produced in the region. Every Saturday of the Advent season there’s a special addition to the market, displaying different artists selling handmade wares such as pottery and jewellery. Don’t miss the unmistakable weekend tram called the Christmas Express that will take you to various shopping areas around town. 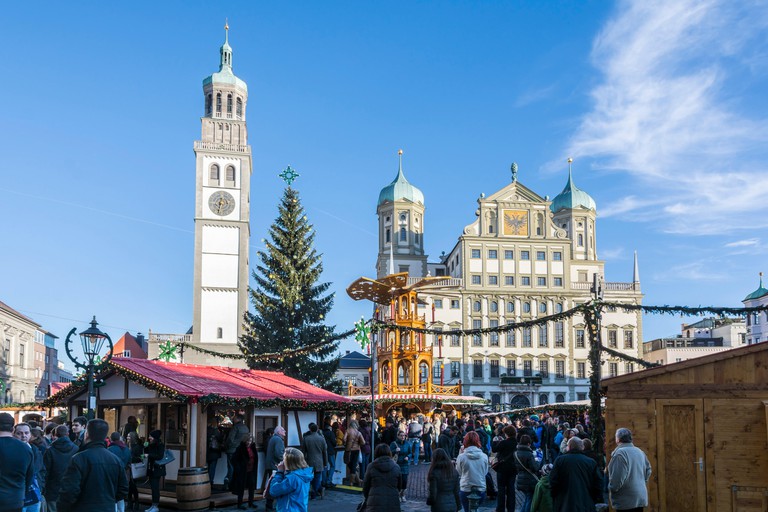 © Panther Media GmbH / Alamy
This market began a half a millennia ago, when gingerbread makers gathered here before Christmas. After centuries of evolution, Augsburg’s Christmas market now delights visitors with what seems like an entire village of booths, forming one of the most beautiful and popular Christmas markets in Germany. Stroll between them for hours, making time for the special performance called Engelsspiel, which sees 24 angels (young ladies from Augsburg) appear on the facade of City Hall and transform the building into a living Advent calendar (every Friday, Saturday and Sunday evenings during Advent, plus December 23). Little ones will also be enchanted by the fantastical scenes along Fairytale Lane. 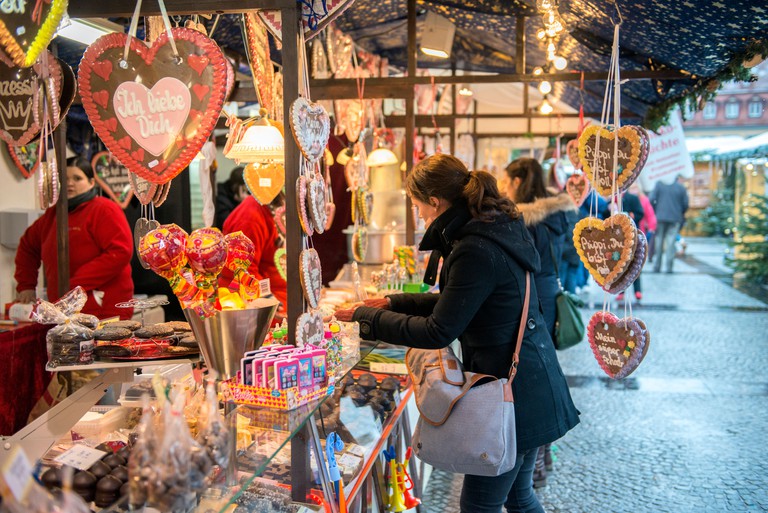 © Danita Delimont / Alamy
The historic and hilly town of Bamberg is yet another Unesco World Heritage Site, celebrated for its picture-postcard views and intimate Christmas market on the charming Maxplatz Square. Visitors will find festive booths and a large, half-timber Nativity scene, depicting various scenes from the Christmas story. Those who have the time can follow the Route of Nativity Scenes, which links together dozens of decorated public buildings, churches and museums. Be on the lookout for regular live performances all season, culminating with the New Year’s Eve concert by the Bamberg Symphony Orchestra. 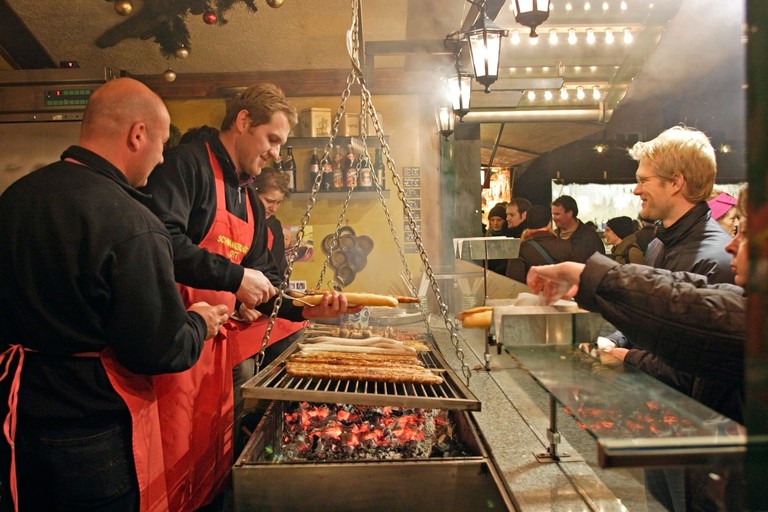 © Kevin Galvin / Alamy
Set against a stunning Baroque structure called St. Stephen’s Cathedral, the Passau Christmas Market offers 70 booths selling authentic gifts, and festive food and drink. Look for the annual Christmas concert held in the cathedral (usually in early December) with a famous choral performance – if you miss it, the cathedral also hosts twice-weekly concerts on one of the largest pipe organs in the world. Meanwhile, kids can partake in a range of activities that include candle-dipping or making homemade decorations for the Christmas tree. 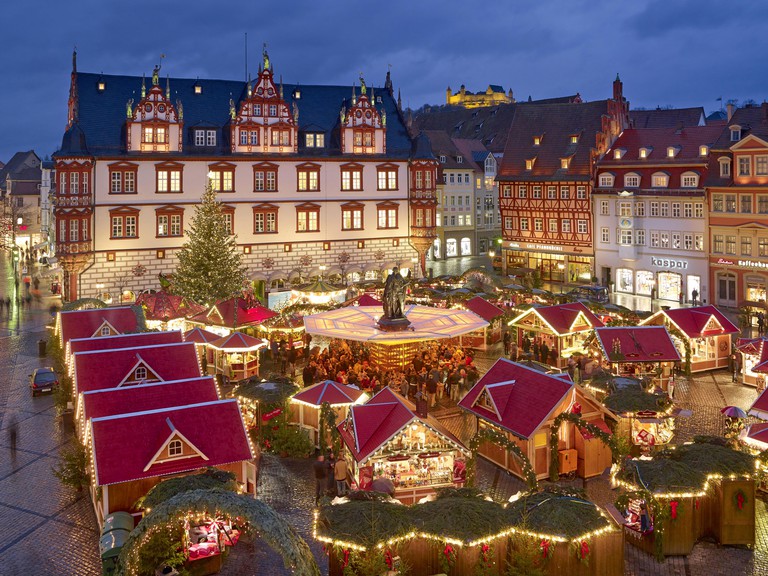 © mauritius images GmbH / Alamy
Tourists are drawn to Coburg during the summer months for the castles and cycling trails in the surrounding countryside. During the Christmas season, though, Coburg puts on a notable market with traditional booths showcasing local arts and crafts against a backdrop of historic architecture. There’s even a live workshop, where artisans show off their trade – whether that’s painting, glassblowing or basket weaving (items are available for purchase once complete). Fun fact: Coburg is the hometown of Prince Albert, former resident Queen Victoria’s husband, who brought Franconian Christmas traditions to England. Look for his prominent statue, which is the site of many festivities at this time of year. 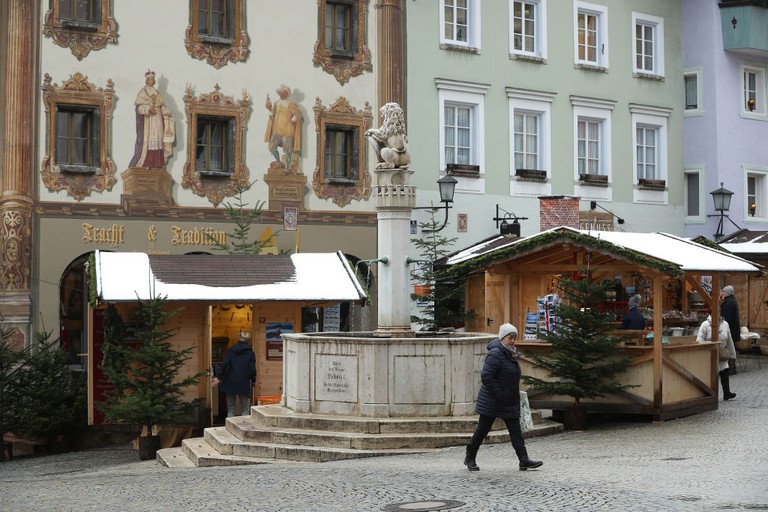 © Sean Gallup / Getty
The enchanting town of Berchtesgaden is high in the Bavarian Alps, not far from Austria. Visitors there during the month of December will find a charming Christmas market and a whole slew of events showcasing rich customs and traditions. The town centre is the place to be, thanks to its decorated market stalls selling original Berchtesgaden Christmas tree decorations that have been crafted according to the region’s centuries-old folk art traditions. A live Nativity scene and stable with real animals adds to the festivities, with daily horse-drawn carriage rides and regular performances by a local brass ensemble keeping up the tempo. If that’s not enough, there are also historic market tours, a Christmas tree labyrinth, painting workshops and a children’s bakery to be tracked down.

If you’re not yet sold, find out why you should visit Bavaria, Germany’s classical heartland. Choose Munich to experience the year-round beer gardens in Bavaria, while staying in one of the best hotels catered for every traveller.

This is a rewrite of an article originally by Marion Kutter.