Lederhosen, Breasts and Beauty: This New Book Celebrates the Eroticism of Bavarian Style 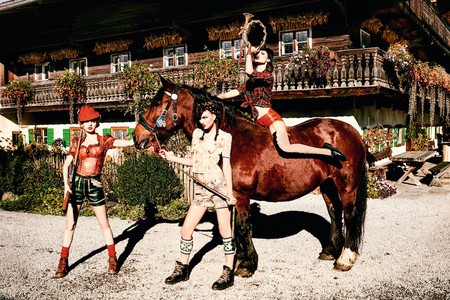 Cue picture of the three women in micro-lederhosen atop of a horse… and that’s just the beginning. Readers are swiftly invited to be in on the joke though, as three models masquerading as ‘Hilda’, ‘Traudel’ and ‘Heidi’ pose provocatively with reams of sausage, peel potatoes in their underwear and compete in naked sack-races through the Bavarian countryside, taking clichés to their most unbelievable, exaggerated extreme. As a rebuttal to stereotypes, it’s almost aggressive, but that’s photographer Ellen von Unwerth’s style. It’s a highly sexual series of portraits – bare breasts in the cow shed, and more in the haystacks. It’s also riotously funny, a sort of visual cabaret – one can only imagine the high jinks that took place during the shoot. 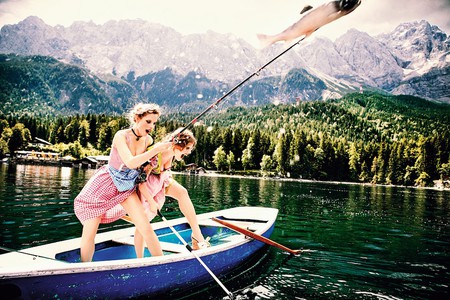 To take a trope as clichéd as the German milkmaid and make it feel fresh is no small feat, and for all it’s eroticism, this isn’t a canon of work that’s inviting you to leer. It’s not pornographic, quite the opposite. Here women are in total control of their own sexuality, and the frequent reversal of gender roles within their portraits only serves to emphasise this. In some images, women are included in the shots as voyeurs, while in others the assumption is more explicit: the women saw wood, spank men with pretzels and go shooting.

Having begun as a model, Ellen von Unwerth quickly moved to the other side of the camera, photographing for the likes of Vogue, Interview and Vanity Fair alongside shooting major advertising campaigns for Chanel, Dior, John Galliano, Ralph Lauren, Victoria’s Secret, Agent Provocateur and Diesel. Aged 63, she’s adept at commanding the feminist narrative. As she noted in a recent Guardian interview, ‘you see so many images that are dark and depressing at the moment. All these sad women being sad! So I figured, let’s show girls having fun and enjoying life’. 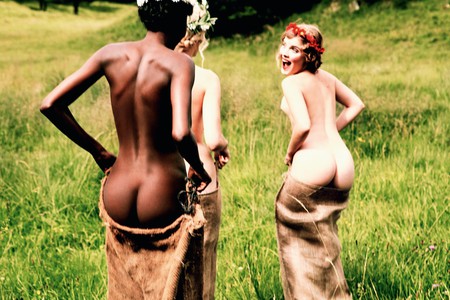 Ellen von Unwerth is famous for her über feminine portraits and adept at subverting the ‘male gaze’. The release of Heimat comes in the wake of a new movement to claim the ‘female gaze’ with a new generation of photographers such as Petra Collins, Olivia Bee, Francesca Allen, Maisie Cousins, Mayan Toledano – and many more. The Guardian’s Richard Godwin notes von Unwerth isn’t that interested in being political about what she’s doing, but it’s hard not to view this portfolio through a feminist lens.

In German, ‘Heimat’ refers to a place where one feels a special sense of belonging. For von Unwerth, it’s Bavaria, and the countryside is also central to the narratives here. Whether it’s the rolling, verdant fields, opulent lakes, lush forests or snowy peaks – the beauty of the region is hard to ignore. The landscapes emphasise the sense of nostalgia and joy taking place within the images, and highlight the affection Ellen feels for the region.

In short, a thrilling, immersive and beautifully composed collection of images; ‘Heimat’ is only a book away. 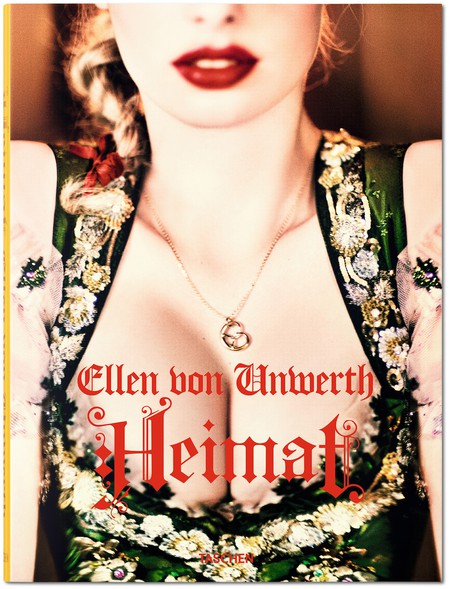 Heimat is available from Taschen now, £650