How to Spend 24 Hours in Wiesbaden 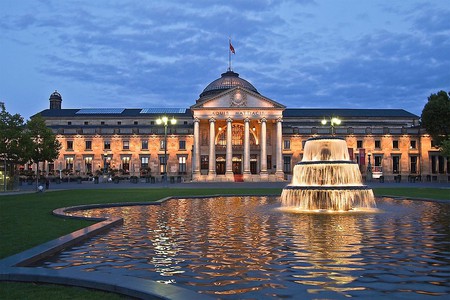 Being only 40 minutes away from Frankfurt and across the river from Mainz, Wiesbaden makes for a fantastic day trip if you’re in the area. The cityscape of Hesse’s state capital is shaped by Neoclassicist and neo-Gothic buildings, beautiful churches and vast parks and gardens. We’ve created a 24-hour itinerary that takes you along all the not-to-miss sights.

Assuming that you’ll arrive by train, take a moment to glance at the newly renovated neo-Baroque central station before you kick off the day with a yummy breakfast at Heimathafen Wiesbaden. On the menu are typically German baked goods, from fresh bread rolls to soft pretzels, as well as croissants and chocolate buns, cheese and sandwich meat platters, all kinds of spreads, muesli, vegan pancakes and a whole lot more. 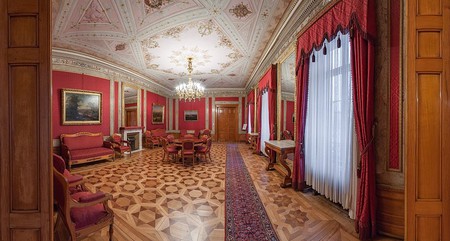 Many of Wiesbaden’s attractions rally around the Palace Square at the heart of the historic Old Town, most importantly the City Palace itself. Built between 1837 and 1841, as the residence of the Dukes of Nassau, the Classicist palace is now the seat of the Hessian parliament. Guided tours are free of charge and announced on the Stadtschloss website if you’re interested in having a peek at the lavishly decorated rooms inside. Next door is the Old City Hall, Wiesbaden’s oldest building which today houses a wine tavern in its vaulted cellar. Its 1884 counterpart on the other side of the road is home to some administrative offices upstairs, and a restaurant in the basement.

Amid the cluster of beautiful historical buildings rises the impressive rusty-red Market Church. The main spires of Wiesbaden’s largest Protestant church soar 98 metres into the sky, and every 15 minutes a carillon of 45 bronze bells sounds over the plaza.

Make your way down to the Schillerplatz and take a left onto Wilhemstraße from here. The wide boulevard is lined with upscale shops, boutiques and arcades on one side, and beautiful parks and villas on the other. Stroll along until you reach the 1894 State Theatre on the northern end of the strip. The grand building that stages classical music concerts, operas, ballets, plays and musicals was initiated by the German Emperor William I, and its architects took inspiration from the theatres in Prague and Zurich.

Tucked away behind the theatre is another one of Wiesbaden’s highlights – the Bowling Green on which sits the imposing Kurhaus at one end. This Art Nouveau building was inaugurated in 1907, and today the complex encompasses restaurants, a casino, a convention centre that sees all kinds of events throughout the year and a beautiful park that extends from the back of the building.

Käfer’s Bistro at the Kurhaus is a great and chic spot to get some lunch. The furniture and décor were brought in from Parisian restaurants and create a classic charm, but if it’s sunny, it’s worth checking if you can grab a spot in the beer garden instead. The menu changes monthly but always lists a mix of regional cuisine and French specialities. 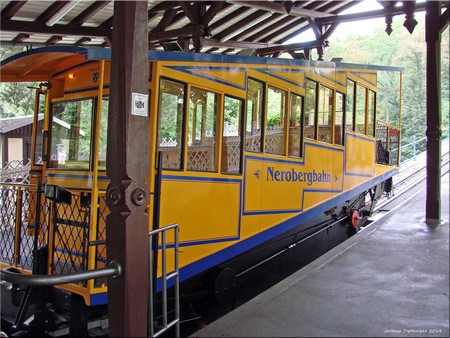 Refreshed, get on bus 1 towards Nerotal for your next destination – the Neroberg hill. You can either take a 25-minute walk up the hill or opt for a short ride in the water-powered funicular railway that started its operation in 1888 and has taken people up the hill ever since. Either way, you’ll be rewarded with spectacular views of Wiesbaden and the surrounding area.

Whether you want to explore one of the hiking trails that start up here, lounge in the vast meadows or, on a warm summer day, go for a swim in the region’s most scenic lidos, the Neroberg hill boasts panoramic vistas of the hilltop vineyards around you. Should the weather not play along, you can always head on over to the Der Turm restaurant and enjoy the views over a glass of chilled local Riesling.

Take the footpath down the hill past the beautiful Russian Orthodox church whose five gold onion-domed towers pop up between the treetops. The church was constructed between 1847 and 1855 and is the last resting place of the Russian Princess Elisabeth Michailovna, the daughter of Michael Romanov.

By the time you get back to the city centre, it’s almost time for dinner. If you’re not hungry yet, spend the rest of the afternoon browsing the shops and boutiques of the Old Town. 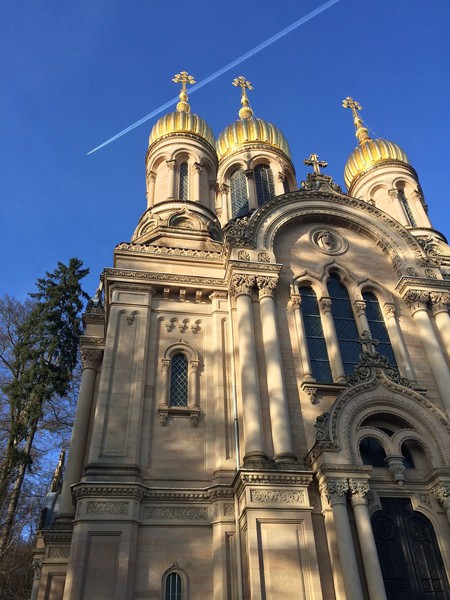 Finding a restaurant in Wiesbaden is relatively easy, and the centrally located Goldgasse is a great place to start looking. The alley is lined with fabulous eateries: Ristorante Comeback is an authentic Italian place that serves all the best the Mediterranean cuisine has to offer – beef carpaccio, oven-baked pizzas, homemade pasta with truffle sauce and tiramisu. Viva Los Tioz lures with fantastic tapas and great wine, and the Scotch ‘n’ Soda pub dishes up some impressive burgers, steaks and schnitzel, topped off with a few British-style meals, including chicken pie and Haggis.

Wiesbaden was once the place to go for people from across the region, and students from Mainz would come here for a night out. Even though locals have seen more and more bars and pubs shut down over the years, the area around Taunusstrasse and Nerostrasse, the so-called Bermuda Triangle, still has some vibrant nightlife where you can down a few beers or dance the night away. Have a look at the places that are open and see where the night takes you.