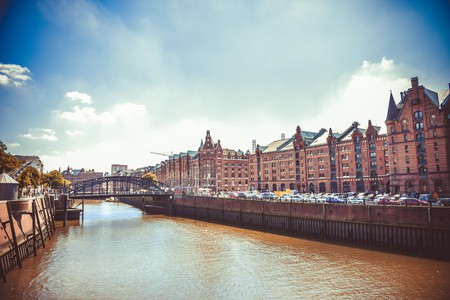 The people of Hamburg love to call their home “the most beautiful city in the world”. Are they correct? This 5-km-long walking tour will take you from the historic harbour to the heart of the city, showing you Hamburg’s most famous sights along the way, letting you decide for yourself.

Opened in 1911, after only three years of construction, this tunnel under the Elbe river was an engineering marvel of its time. The 426-metre-long tunnel connects the city centre to the southern banks of the river. Today mainly a tourist attraction, the Old Elbe Tunnel once considerably shortened the route to work for thousands of dock and shipyard workers. Descend into the tunnel using one the large lifts, and enjoy the unique atmosphere created by the tiled arches, the lamps that light them, and the glazed terra cotta decorations. Walk through the tunnel to the observation platform on the other side of the river for gorgeous views across Hamburg.

Nearby food and drinks: grab a traditional fischbrötchen (fish sandwich) at Brücke 10 or sit down for a local beer and a meal at Blockbräu. 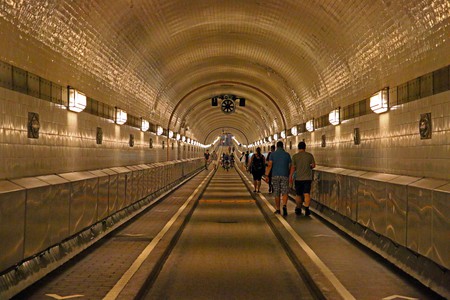 St. Michael’s Church, usually referred to simply as Michel, is Hamburg’s largest and most famous church. Built in 1912 after fire had destroyed its predecessor, today Michel is among the finest examples of Protestant baroque churches. The 132-meter-tall (433 ft.) copper steeple has long served as an orientation mark for ships on the Elbe river. Admire the grandeur of the church, its large altar and five organs, then take the elevator to the observation platform for the best panorama views across Hamburg.

Nearby food and drinks: visit the Old Commercial Room for a traditional North German meal or the Cafe am Michel next door for a lighter snack. 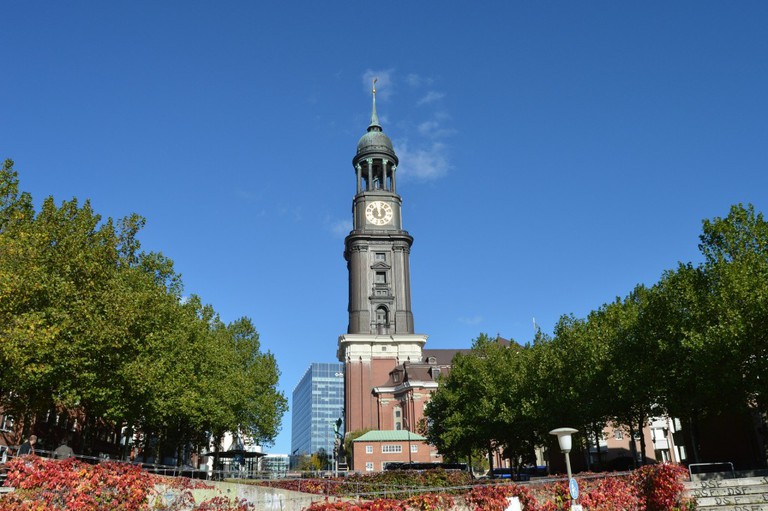 Next to St. Michael’s Church you can find the Krameramtsstuben, also known as the Kramer-Witwen-Wohnungen, the oldest assembly of townhouses in Europe. These 17th-century timber-framed houses were built for the widows of deceased members of the Guild of Shopkeepers. Keep an eye out, as it’s easy to miss these small houses, surrounded by taller and newer buildings. Walking through the narrow alleyways and courtyard, you will find small shops and galleries. The oldest building houses a museum with original furnishings from the middle of the 19th century.

Nearby food and drinks: sit down at the Restaurant Krameramtsstuben to enjoy traditional atmosphere and local delicacies. 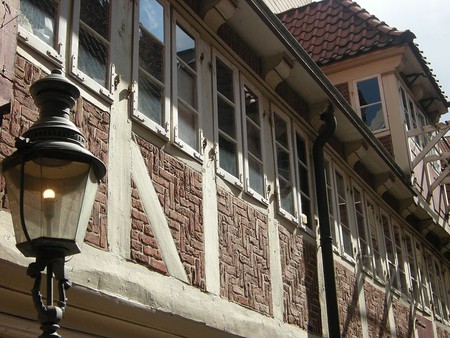 Hamburg’s newest architectural landmark – the Elbphilharmonie – may have just opened in January 2017, but it can already be counted among the city’s iconic sights. This building, designed by Herzog & de Meuron, is among the best examples of contemporary architecture in Europe. What was once a mid-century red brick warehouse now serves as the foundation for two concert venues hidden behind a dazzling glass façade. These two parts of the building are connected by the Plaza – a wraparound public viewing platform accessible to everyone. Enjoy the views across the river and the harbour, the nearby Speicherstadt warehouses and the newly built HafenCity district.

Nearby food and drinks: visit one of the three floors of the Störtebeker Elbphilharmonie for anything from a small snack to a gourmet meal. 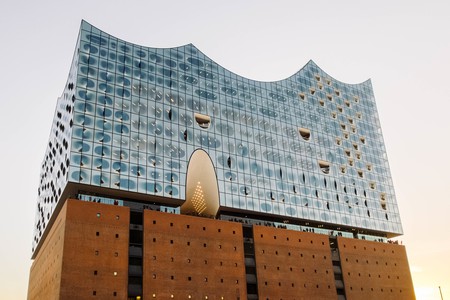 Next to the modern steel and glass architecture of the HafenCity lies the historic Speicherstadt – the world’s largest warehouse complex. The neo-gothic red brick warehouses were constructed between 1883 and 1927, and are part of the UNESCO World Heritage. This picturesque district encompasses a whole network of tall warehouses, canals, streets, and bridges. You can also enjoy various museums, take a boat tour, or simply walk around and enjoy the atmosphere.

Nearby food and drinks: sample freshly roasted coffee at the Speicherstadt Kaffeerösterei or enjoy tea at one of the iconic photo locations Teekontor Wasserschloß.

The view across Speicherstadt | Pixabay

Together with the Speicherstadt, the Chilehaus is part of Hamburg’s UNESCO World Heritage. Completed in 1924, the ten-storey office building designed by Fritz Höger is an example of the so-called Brick Expressionism style. The Chilehaus is constructed from 4.8 million bricks and has 2,800 windows, but its most distinct features are the curved facades and the sharped-angled top, reminiscent of a ship’s prow. Explore also the surrounding Kontorhaus district to gain an impression of Hamburg’s historic commercial centre.

Hamburg’s gorgeous neo-Renaissance City Hall was completed in 1897, half a century after the Great Fire of Hamburg had destroyed the old city hall. The opulent building on the shore of the Alster Lake is supported by 4,000 wooden poles, nowadays invisible to the eye. The Rathaus still serves as the city’s seat of government but is open to visitors, and daily guided tours are available. Explore also the beautiful Italian-style courtyard that connects the building to the neoclassical Chamber of Commerce.

Nearby food and drinks: enjoy a meal at the Parlament Restaurant in the old wine cellars underneath the City Hall, or have a coffee in one of the coffee shops across the Rathausmarkt. 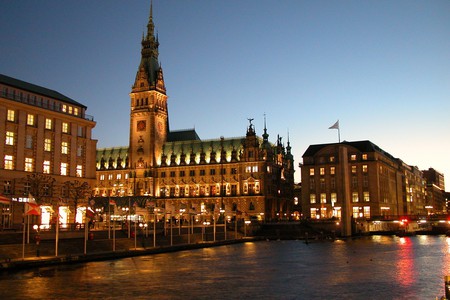 The white shopping arcades by the Alster lake were designed by Alexis de Chateauneuf, architect and city planner who gave Hamburg a new image after the Great Fire of 1842. Stroll along the outside cafes, luxury stores, and galleries, and enjoy the Italian charm of the Alsterarkaden. Finally, walk through the Mellin Passage – Hamburg’s oldest shopping arcade – that connects the arcades to the Neuer Wall shopping street.

Nearby food and drinks: have a coffee and cake at the Arkaden Cafe or sample a Syrian meal at Saliba Alsterarkaden. Or walk around the corner for Hamburg’s most beloved curry sausage at Mö-Grill. 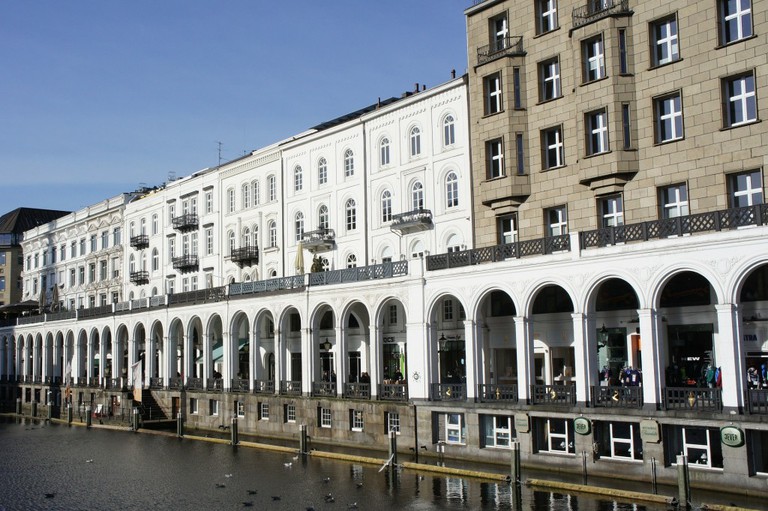 Check out this map to plan your route for a tour of Hamburg’s best architectural landmarks.