The notoriously over-crowded, over-priced, and insanely popular festival known as Oktoberfest attracts visitors from all over the world. Held every year in Munich, it is such an institution that travel companies don’t bat an eye at telling you that it just has to be on your bucket list. However, the chances of actually getting a seat at the famed beer festival is thought unrealistic by some and delusional by many. But don’t panic! Our guide may not ensure you a seat at the table, but it will prepare you for what to expect. 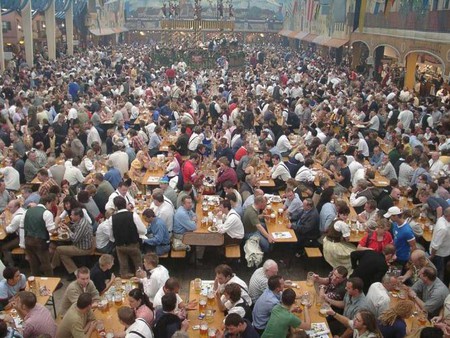 The origins of this strange festivity

Although you could be forgiven for thinking that the festival is a clever ploy to stimulate Germany’s aging population, providing a slight bump to the amount of births precisely nine months post-festival, Oktoberfest originally started out as a celebration of the royal wedding between King Ludwig I and Princess Therese of Saxony Hildburghausen on October 12, 1810. They set up a few tents in a meadow bordering the city and the townsfolk celebrated, eating and drinking in their honor, in the name of the newlyweds. Thanks to history’s continuity, we can now look back on nearly 180 Oktoberfests and uncountable liters of beer.

Today the festival has been transformed into an incommensurately large, alcohol-fueled affair. The former tents are actually the size of car parks, with ceilings painted in bright colors and motifs. Electronic versions of traditional South-German music permeate the air like a hysterical mantra. The recommendation therefore is not to visit on consecutive days, with some advice going as far as to limit attendance to three days per year. 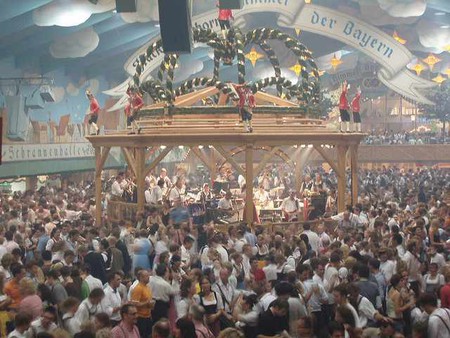 One of the biggest tents in the festival, decorated with cloud like shapes, called Schottenhamel | © Mahmut/Flickr

Despite being called Oktoberfest, it is held during the three weeks preceding October. The festival takes place on the ‘Theresienweise’, or ‘Festweise’ for the locals, and preparations start as early as June – an indication of the size of the event. This year it begins on September 19th, ceremoniously announced by Munich’s mayor, Dieter Rieter, with a loud “O’zapft is!” (“It is open!”) to the Schottenhamel tent’s crowd.

The festival itself is free, and you can walk around the stalls and soak up the atmosphere at no extra cost. But a warning must be issued: last year’s festival made headlines because the famed Maß (one liter glass of Bier) hit the €10 mark, and meals within the tents average €20, although small snacks are sold throughout the festival at lower prices. We advise attending with around €50 cash in your pocket, depending on how thirsty you are. 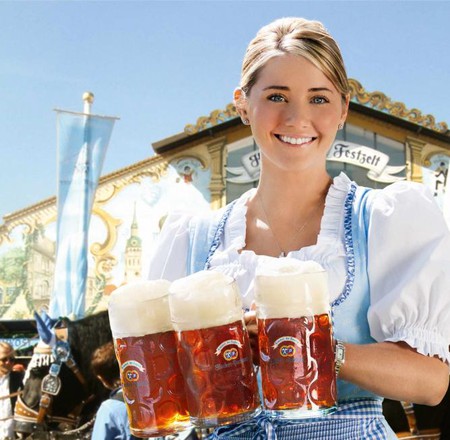 A serving maid in the wild. They expertly navigate the crowds with the help of surprisingly loud whistles | © Wikicommons

This question hardly needs answering; drinking of course, as most of Germany is famous for. But unfortunately it’s not so simple. Oktoberfest’s renown has made it incredibly popular, not only with locals, but also with many hoards of tourists. This makes it difficult to find a seat at a table within the tents, especially on the weekends and the evenings. The catch is that without a table you can’t be served. This technicality requires a strategic approach: either turn up sufficiently early or avoid busy times of the week, or hover uncomfortably behind guests that seem to be finishing their meals… Reservations, though possible, are first and foremost for the ‘faithful’ members of the festival and are made as early as a year in advance.

Aside from, of course, enjoying inhuman amounts of beer, the festival has rides, music, and food. A lively atmosphere that promotes inter-generational bonding has made it a favorite event among Munich’s young and old, and people-watching will definitely provide an interesting perspective into the city’s culture.

We all understand the temptation of dressing like a 19th century peasant. Despite its temptations however, it is important to keep in mind that the fancifully colored, short versions of a maid’s dress, and the extra-tight lederhosen are rather less traditional than you may think. What is traditional dress then? It includes southern German garments such as the dirndl.

For the men: a checkered shirt (without a scarf), traditional Lederhosen (with suspenders), off-white socks rolled down, and traditional Haferl shoes. The women’s dress (a Dirndl) is long, but ends above the ankles. On top of a short-sleeved Trachtenblusen, the dress sits an apron which should be precisely as long as the dress. Not longer, and not shorter, warn the experts. Footwear is recommended to be flat but elegant; possibly because after two Maß of beer, walking elegantly is no longer an option.