7 Reasons To Cruise The Rhine – Germany's Most Romantic River 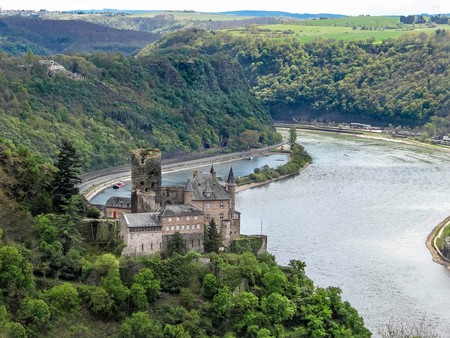 The Rhine is the river of 19th century neo-gothic paintings and bildungsroman – moody, romantic and a little bit violent, chock full of castles, vineyards and the iconic Loreley Rock, it is also home to the Rhine Maidens – Germany’s answer to the Sirens – just waiting to tempt lusty sailors ashore. If that’s not enough – Rhine cruising has gotten much more glamorous in recent years – here are 7 reasons why you should enjoy 7-10 days of sheer boat-based luxury and cruise the Rhine. 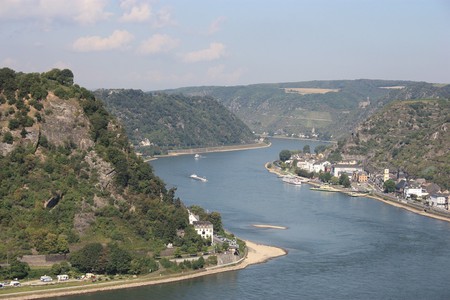 The Rhine river via Pixabay

The Rhine has inspired and featured in all sorts of Romantic stories. Not small r Hallmark romance, it is important to note, with its chocolates, teddy bears and champagne. Big R Romance with the sort of intense, violent and tragic experience so overwrought with feelings that even our hero or the object of his affection, or both, will end up dead.

Take for example the legend of Lorelei, a beautiful maiden who threw herself in the river because her beloved loved several others. Spared death, she transformed into a Siren (or mermaid) and lured many sailors to their death at the big rock near St Goarshausen.

Big R romance is not obligatory on a Rhine cruise, it should be noted, but it is easy to imagine when you’re on the water how the landscape inspired such a mania. If you prefer small r romance, cruise staff will more than likely be happy to provide you with all the chocolate-dipped fruit you and your love require.

For most of its length, the Rhine is not real big on beaches. The river carves its way through steep hills some 130m high, which made them perfect locations for Medieval fortresses and castles. The British craze for engravings of castles high on a craggy hill in the first half of the 19th century cemented this part of the river as a mystical, moody place in the minds of people in the English-speaking world. A connection cruise lines – eager to show you some of the 66 surviving specimens that are packed into the stretch of the river between Bonn and Bingen – are more than happy to keep making. 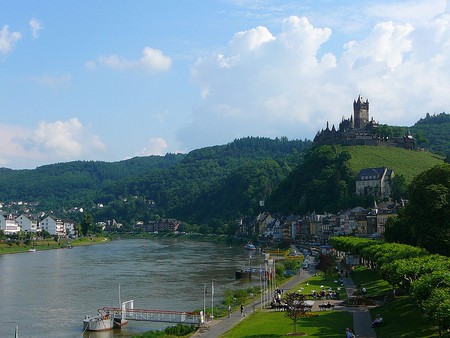 Part of the fun of a river cruise is the ease with which the boat can stop for a shore excursion. No time wasted chugging into port and waiting for a tug into the quay, the boat simply pulls over at the nearest available gangway and off you get. This is especially convenient when the boat arrives in vineyard country. Wine has been grown on the banks of the Rhine since Roman times, more than 60% of Germany’s wine is produced along the river, 2/3 of which is white. Most cruises stop at at least one vineyard, but if wine is a special area of interest, it’s possible to book a cruise dedicated mostly, or even entirely, to the grapeful arts. Reislings ho!

See life on a working river

The Ring from a popular recent film marathon is resting at the bottom of the Rhine somewhere. Though it may be tempting to bring your goggles and recover the treasure, there are several reasons bringing your goggles is not advisable. Putting aside the fact that the Ring is not actually a real thing, the Rhine is a working river traversed each day by more than 1600 barges carrying about 500 million tonnes of cargo.

Watch six countries float by in between

The Rhine begins at the Rheinwaldhorn Glacier high in the Swiss Alps, blossoming into a river proper at Reichenau and emptying into Lake Constance (Bodensee) and continuing to Basel, where it first becomes navigable. Rhine cruises can begin in Basel, Strasbourg, Cologne, Koblenz, Amsterdam, Rotterdam and many cities in between depending on how many days you want to be afloat. Travelling from one end to the other will take you through Switzerland, Liechtenstein, Austria, Germany, France and the Netherlands. 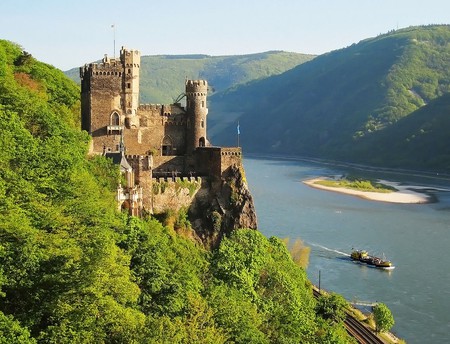 You can go pretty well anywhere else in Europe from there

The Rhine is long and also well-connected, which means river boats can easily switch between without going through locks or dealing with other tricky navigation issues. Many cruise companies combine Rhine cruises with excursions or extensions into the Moselle, the Neckar, the Main as well including the Seine, Elbe, Rhone, and Saone and eventually the Danube. A 22-night North Sea to Black Sea cruise for example leaves from Amsterdam and travels through Germany, Austria, Slovakia, Hungary, Slovenia, Serbia and Bulgaria before arriving in Giurgiu, Romania.

Travelling the actual length of the Rhine from Basel to Amsterdam can be done by train in about 8 hours for 70€ if you buy ahead and it is easy enough to break up the trip, book hotels on your own and explore the sights along the way. But that’s not really the point. The height of luxury is choosing to do something much more time-consuming than required and paying with pleasure for the privilege. Besides, trains don’t have shuffleboard pitches and putting ranges and castles (no matter how charmingly crumbled) and generally do not have indoor pools. Beside, how much fun to shout, “I’m on a boat!”.