Iconic Murals on the Berlin Wall 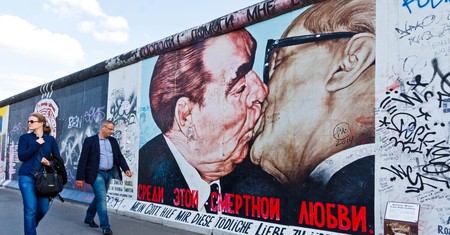 The Berlin Wall, once a symbol of division, now forms a large open-air gallery featuring 105 murals by artists from across the globe. Many were painted in 1990, the year after the wall fell, and the artworks that line the banks of the River Spree stand as a memorial to the reunification of Germany and to a broader moment of globally significant political change. The most striking and renowned murals include Dmitri Vrubel’s Fraternal Kiss, Birgit Kinder’s Trabant breaking through the wall and striking cartoon heads by Thierry Noir. Keen to know more? Here are the most iconic Berlin Wall murals.

Russian artist Dmitri Vrubel’s My God, Help Me to Survive This Deadly Love, commonly known as Fraternal Kiss, depicts an embrace between Soviet leader Leonid Brezhnev and East German president Erich Honecker at the 30th anniversary of the creation of the German Democratic Republic (East Germany) in 1979. In March 2009, following the deterioration of the artwork as a result of vandalism and atmospheric conditions, the painting was erased and Vrubel was commissioned to repaint the piece. 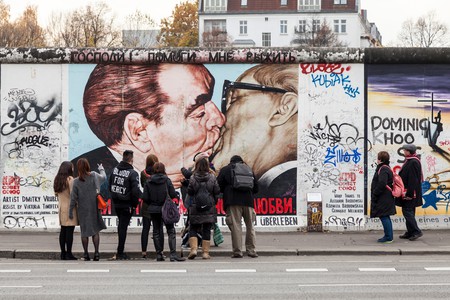 Known for his signature brightly coloured cartoon heads, French artist Thierry Noir was the first person known to paint on the Berlin Wall. For five years during the 1980s, Noir illegally painted the western side of the Berlin Wall with bold, cartoonish images of animals and human faces, evading police and border guards. In part due to this dangerous environment, and his consequent need to be speedy, his murals feature few colours and avoid complex figures. 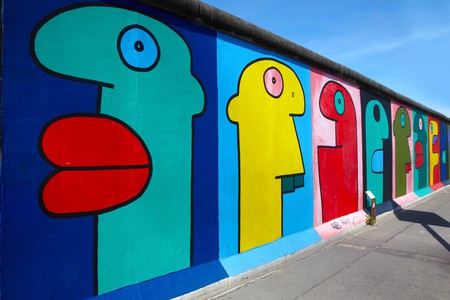 Entitled Danke, Andrei Sakharov (Thank You, Andrei Sakharov), this simple portrait was painted by Dmitri Vrubel and Viktoria Timofeeva in honour of Soviet nuclear physicist, dissident and human-rights activist Andrei Sakharov. Having worked to design thermonuclear weapons for the Soviet Union, Sakharov later became an advocate of civil liberties and civil reform, facing state persecution for his activism. These efforts earned him the Nobel Peace Prize in 1975. He died in 1989, just a few weeks after the wall fell. 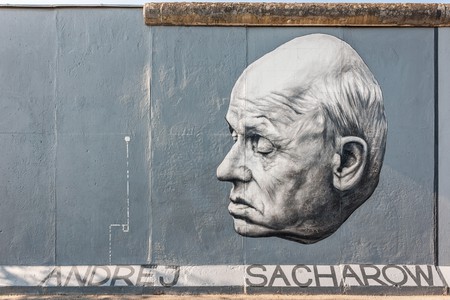 ‘Detour to the Japanese Sector’

Detour to the Japanese Sector was painted by East German artist Thomas Klingenstein. The mural evokes the artist’s childhood desire to explore and live in Asia – somewhere East Germans were not allowed to travel or learn much about. Klingenstein spent time in a Stasi prison for dissidents before being extradited to West Germany, and later lived in Japan from 1984 until the mid-1990s. 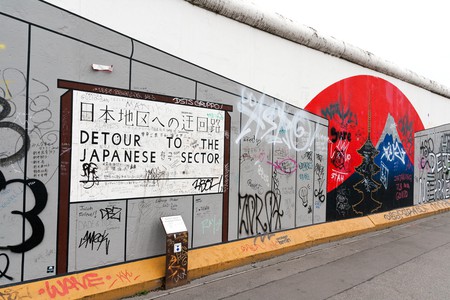 Depicting elements of the Israeli flag superimposed onto the German flag, Günther Schaefer’s Vaterland (Fatherland) was painted to honour the 50th anniversary of the Night of Broken Glass (Kristallnacht), when Nazi forces in Germany and Austria destroyed Jewish-owned shops and businesses, smashing their windows. The painting is a protest against extreme regimes and abuses of human rights, but has been a target of vandalism since it was painted in 1990. 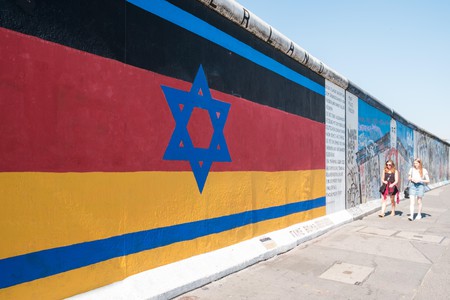 The Trabant breaking through the wall

One of the most symbolic pieces of graffiti the Berlin Wall has to offer, painted by Birgit Kinder, shows a Trabant car breaking through the concrete. The Trabant – ubiquitous in the German Democratic Republic – is seen to represent the former East Germany and the Eastern bloc. The painting is a nod both to this popular car and to the many East Germans who tried to escape over the Berlin Wall. 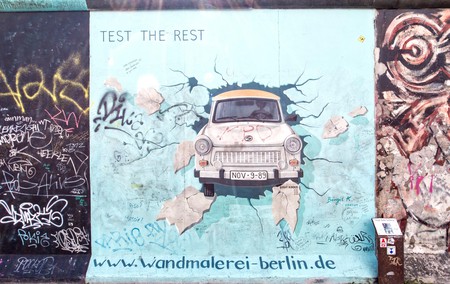 ‘It Happened in November’

German-Iranian painter Kani Alavi painted the haunting mural Es Geschah im November (It Happened in November) in 1990. The abstract painting – inspired by Alavi’s own observations from his former apartment near Checkpoint Charlie – depicts the day the wall fell, with thousands of East German faces pouring through to the West. The faces show a range of different emotions in an effort to portray the mixture of confusion, joy, trepidation and liberation felt by East Germans heading over to the West. 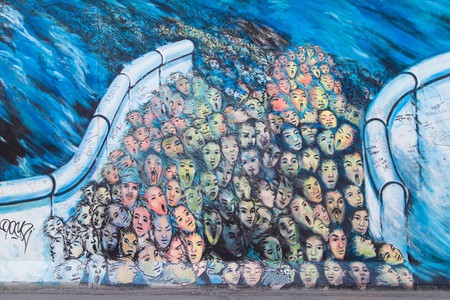 This mural, entitled Der Mauerspringer (The Wall Jumper), was painted by Gabriel Heimler in 1989 and restored in 2009. The wall jumper is not, as often assumed, an East German refugee trying to escape to the West, but rather a West German jumping over to the East in a symbolic gesture of freedom. 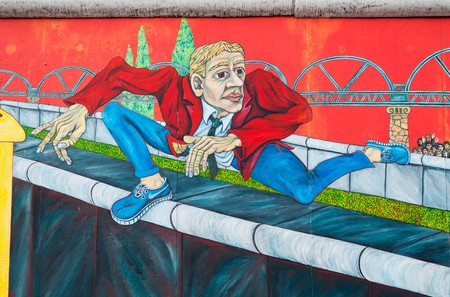 ‘The Seven Stages of Enlightenment’ 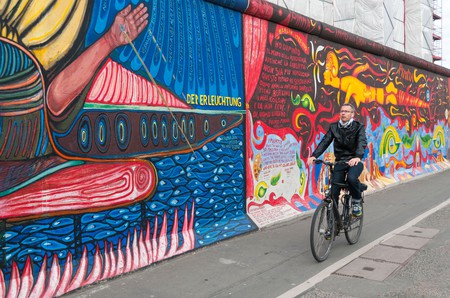 ‘Diagonal Solution to a Problem’

Michail Serebrjakow’s mural, entitled Diagonale Lösung des Problems (Diagonal Solution to a Problem), depicts a thumb being held up by a chain to keep it in a positive, thumbs-up position. The artwork shows the forceful nature of the East German government to preserve communist ideals and quash dissenting voices. 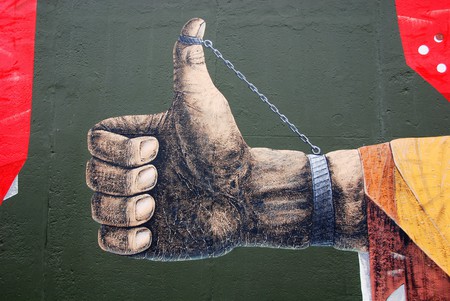