Meet the Women Behind Copenhagen's New Female Only Beer Club 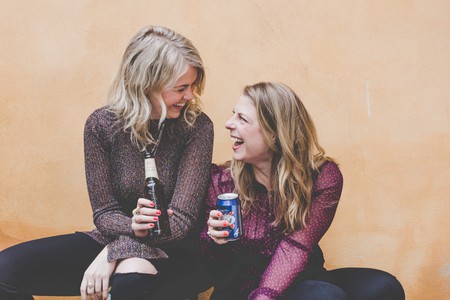 Meet Christine and Michala, the founders of De Ølglade Damers Klub, a women-only beer club that brings ladies and beer together through unusual and exciting events. Being passionate Copenhageners, Christine and Michala love cycling and Scandinavian food in addition to beer.

That Denmark is a real mecca for beer-lovers isn’t new news. Not only is it the home country of Carlsberg but over the past few years many microbreweries have popped up, expanding the city’s already-large beer scene. But what about the country’s drinking culture? Do Danish women enjoy beer as much as their male friends? Well, Christine and Michala gave us all the answers and can tell you why the Beer-Loving Ladies Club has been such a great success.

Who are Christine and Michala?

We are passionate and curious women who never get bored of exploring new things – from beer and travelling to places to eat or a new book to read. We love Copenhagen and love to explore the city – mostly on our bikes (but of course, we are Danish).

How did the two of you meet?

We met through work when we were both parts of the jury for a case competition at one of Copenhagen’s largest universities. We started talking over a beer and Christine told Michala about her idea to create a club for women who love beer. Michala found it too good of an idea to let go to waste. Three months later the Beer Loving Ladies Club was live and the rest is history.

Denmark is known for being a nation that takes pride in gender equality. Would you say that the same rules apply when it comes to the country’s drinking culture?

Our research shows that girls start to drink beer to impress the boys and be able to hang out and behave at their level. Even though she at first wouldn’t comply with this, Christine herself recognizes that she started to drink beer because the cute guy from school invited her for one after school. Even though she did not find her Prince Charming back then, her love towards drinking beer with the boys at the brown bars (which is an absolute must-do when in Denmark) was sparked.

When we were both single, we experienced that potential Tinder dates sometimes found it odd when we suggested going for a beer on the first date. You are quickly stigmatized. Also talking with women in general, we found many women had bad beer experiences when they were young, and then stayed off beer ever since. With the great variation of the beer scene today, we really think that’s a shame! We normally joke about how rejecting beer based on drinking a lukewarm and flat beer as a teenager would be the same as rejecting men based on one bad date (if that were the case, our reproduction of mankind might be deeply threatened).

We experience that when women get a taste for beer, they lack a place to explore and enjoy beer. Many beer bars are very masculine and the vast majority of the clientele are men, and sometimes it becomes all about competing to see who knows the most, and winning the argument on whether it is a good beer or not. In these places, the focus is often on the brewing process and the very technical description of what makes a good beer, and there’s quite a lot of prejudice on that. There is nothing wrong with that! We just didn’t see it match young women of today, which is why we started the Beer-Loving Ladies Club (De Ølglade Damers Klub).

Men are very good at building all-male initiatives like fraternities of all sorts, and we were missing a place where we could explore beers in a more holistic sense, where surroundings, food, and beer are combined in a united and aesthetic experience. So, we often build our events and tastings around a theme. We prioritize the good story over technique (although we are a bit nerdy and would be able to have a great talk on this if the question came up), but most importantly, we want to build a place for women to meet and explore the beer themselves in order to create their own opinions. 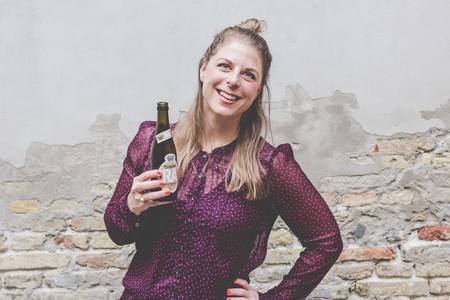 Most women in Denmark can be seen drinking beer in pubs, parks and on the streets, which they seem to enjoy a lot. What made you feel like there was a need for creating a women-only beer club?

There are a lot of beer-loving ladies out there! So it’s more a matter of creating a space for them to live out their love for beer and/or meet other women who also drink beer. We see beer as a very social element and a ‘Cheers!’ is one of the shortest ways to a new friendship. This is very evident at our events and we often go way beyond the time defined in advance, due to the women having a great time and talking to a lot of new people. We furthermore try to encourage our ladies to bring their friends who do not love beer, as well as highlighting new entry points by creating beer cocktails for some events and really showing the large variety of beers.

Often, we choose with our heads. For instance, Michala used to go around with the belief that she didn’t like sour beer. A few beer festivals back, we were visiting a brewery that served a sour beer without us knowing it. With a big smile on her face, Michala spoke of how she loved the beer, which made Christine have a big laugh and tell her this was indeed what you would refer to as a sour beer. It just shows how important it is to stay open and curious – and we also have to remind ourselves of it once in a while. And that is why we find it important to have this club where you open your senses and explore new beers – and perhaps it’s likely that more will love them because they are served within the right setting together with other lovely ladies.

Were you surprised to see so many women attend events?

Yes and no. Our first event was a test, where we promised each other that we would invest our time in the Beer-Loving Ladies Club if 40 women would show up. Around 200 women came to the event and that really encouraged us to go forward! We know that there are a lot more women in Denmark who love beer than we have members – and many more women, who just haven’t found out yet that they love beer. So we definitely see a potential for growth and have big ambitions and dreams for the Beer-Loving Ladies Club. But we both work full-time jobs and Christine also has her own family to spend time with, so right now we try our best to keep up with our good ideas, the amazing opportunities we get in co-creation and partnerships with the breweries and all our dreams. 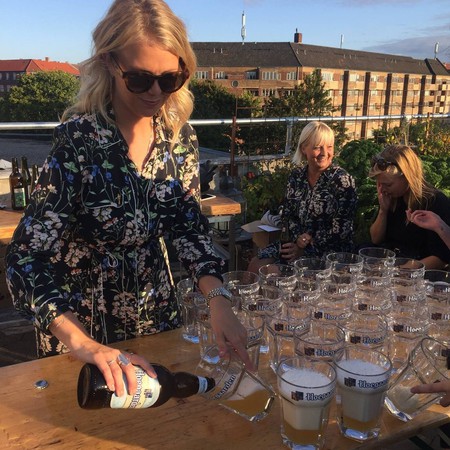 How would you describe the reactions from males around you upon starting the all-women beer club?

Men usually first us if we are a feministic project and questions why they are not allowed to join us. But then when we explain to them the reason behind the club, they often soften up and show us lots of respect. We were actually expecting to be scrutinized by some of the beer enthusiasts but after showcasing that we do know what we are talking about, they have started to understand that we’re actually supporting their mission, and together with the male brewers, who have been amazing from the start, they are beginning to really see us as close partners in a joined mission!

What goes into the process of choosing the beer brands that are served at your events?

We start with the theme of the event. For instance, we have an oyster and beer event coming up because we like to show how old-fashioned it is to believe that only champagne matches oysters. For that event, we serve four oysters with different garnish accompaniments, which we then pair with four completely different beers to match the different flavours. We really want to challenge the perception of how these two things go together and we’ll try to do that by showing the wide range of beers; from beers brewed with champagne yeast to create the bubbly sensation to a stout that can really kick some butt and goes well with the salty flavour of the oyster. We are open to all beers from cheap and accessible to expensive and limited, as well as from micro to big commercial breweries. We are not taste judges but beer lovers and, in this case, facilitators. We leave it up to the women at the event to shape their own opinion of the beers. What is important to us is that the beers match the theme of the event and have a great story behind them. 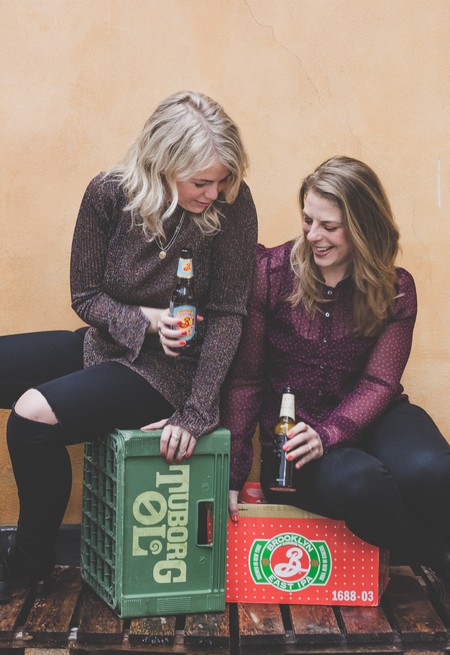 Could you tell us about your favorite and perhaps most successful event to date?

That is like asking to choose your favourite child. Each theme has been so different and therefore we can say that we actually love each one of them. Our list of themes is extremely long and we still have many more to come.

What advice can you give women interested in creating all women’s beer club in another country?

First of all, do it! Secondly, be patient and passionate in regards to the process. And last but not least, find the right partners who put as much energy into each event as you do, so you don’t end up carrying beers and chairs all night by yourself. 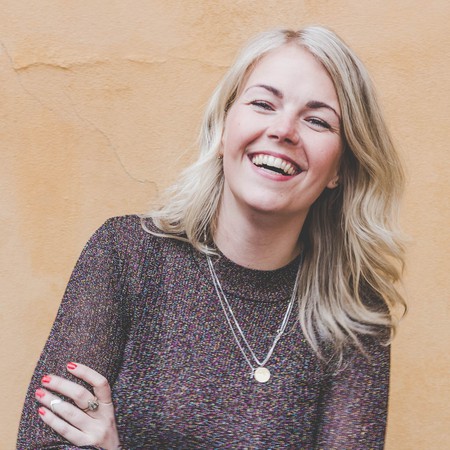 What can we expect to see from you in the future?

We’d like to expand into traveling to study and sample more beers, and perhaps write a book. And then we really want to bring all our event ideas to life and grow the number of our group’s members.