A Brief History of the Alexander Nevsky Cathedral in Sofia 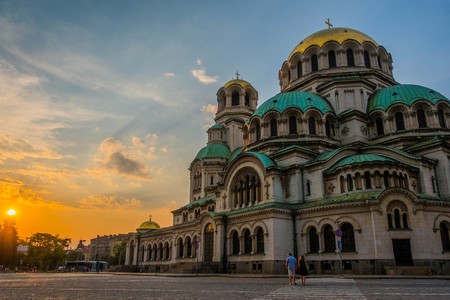 When you start preparing for your trip to Sofia, you will over and over again come across the Saint Alexander Nevsky Cathedral. It is one of the main attractions in Sofia and the most important Orthodox church in Bulgaria, the seat of the country’s patriarch. Before you visit it, discover what makes it so special and how it came into being.

When and why was it built?

The building of the cathedral was connected to Bulgaria’s liberation from the rule of the Ottoman Empire in 1879. Since at that time Bulgarians didn’t have an army while the Russians had political interests in the region, the main part of the war was undertaken by the Russian army. After the end of the Russian-Turkish War of 1878-1879, the grateful Bulgarian people wanted to build a monument to all the brave men, Bulgarian and Russian, who fought and died for the liberation of the country.

It was decided that a magnificent Orthodox cathedral is what would best embody the memory of the sacrifice. The construction process took 30 years, as the ongoing wars at the time delayed the official opening of the cathedral for yet another 12 years, until 1924. It was also heavily damaged during WWII, when American and British planes bombed Sofia.

What is the origin of its name?

Alexander Nevsky was a 13th-century prince, later declared a saint, who engaged in some of the toughest battles of the Kievan Rus (a Slavic tribes federation, the ancestor of today’s Russia). Saint Alexander Nevsky was the personal patron-saint of the Emperor Alexander II of Russia, who ruled the country during the liberation war of Bulgaria, so he was chosen as the patron of the cathedral as a gesture of respect and gratefulness. 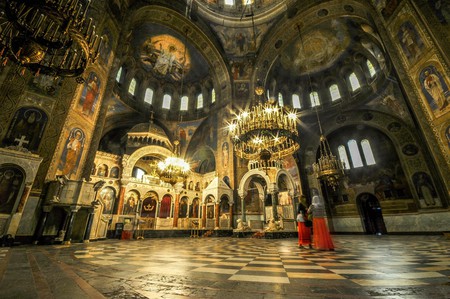 When the foundations of the cathedral were laid, a metal boxed with the names of the members of the government was buried next to them.

The cathedral has 12 bells, all created in Moscow and brought to Sofia from there. The biggest of them weighs 12 tons, while the smallest is only 10 kg.

The domes of the cathedral are covered in gold.

Rare and expensive materials were used to furnish the interior of the cathedral as well – Italian marble, Brazilian onyx, Indian alabaster, and chandeliers from Munich.

In the crypt of the cathedral, there is a small museum dedicated to Christian art where you can see a collection of unique icons and murals characterizing the development of the Bulgarian religious art.