The History Of Manneken Pis, Brussels, In 1 Minute

A symbol of defiance from a small city with a strange sense of humor. Knowing these historic facts will certainly make your visit to the Manneken Pis statue more interesting and help you understand how this funny little statue captured the hearts of its residents, and is still relevant today.

The name of this tiny statue simply translates to ‘Peeing boy’ — while the French version, Petit Julien, literally means ‘Little Julien’. While the statue you can see at the corner of the Rue de l’Étuv and the Rue du Chêne is a replica from the 17th century statue, the original stone version is much older.

The statue most probably started out as a public fountain, with the peeing boy as a homage to the tanners, as medieval tanners let children and street urchins pee on leather to make it more supple.

Time passed and people forgot how the statue got there in the first place, so incredible legends started to explain its origins. The most popular story states how the little peeing boy saved the capital. In this tale, Brussels was surrounded by enemies. One day they seemingly retreated, but had really put tons of gunpowder under the city. A little boy saw the burning fuse and quickly peed on it. In another well-loved tale the peeing boy is actually a historic figure, Duke Godfrey III of Leuven. As a child, he was put in a basket in an oak tree to encourage the knights fighting in his honor. Every now and then the toddler stood up and peed on the heads of his enemies. 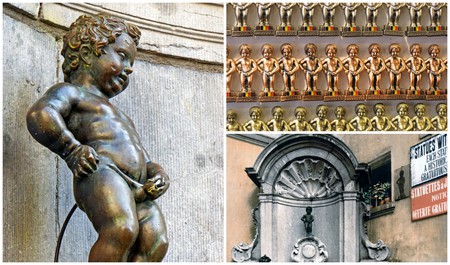 To illustrate how important Manneken Pis is to the Brussels residents, in 1747 French grenadiers from Louis XV of France’s army thought it would be funny to steal the ridiculous statue. Threatened with a huge riot, Louis severely punished the jokers and gave Manneken back to the city, dressed in expensive brocade, embroidered with gold and decorated with the cross of Saint-Louis.

That wasn’t the only war and abduction Manneken Pis survived — he has been stolen, retrieved, destroyed and remade several times throughout history. The little peeing boy made it through the terrible bombardements of 1695 that leveled a good chunk of the city, and was unscathed during the world wars.

In 1914, after German troops had invaded Belgium, a cartoon of the little Manneken peeing on German soldiers was seen on the cover of a satirical newspaper. While the face of Brussels may change, the little peeing boy is still a well-loved icon as well as a symbol of defiance and resilience — an ‘up yours’ to every danger that threatens the city.

📅 Every day, any time – Manneken Pis is always open to public